The February Plan, by James Hall Roberts, was first published in 1967. It tells the story of Phillip Corman, a famous author who travels to Japan to investigate the mysterious death of his son, a lieutenant in the military. Accompanied by his beautiful secretary (of course), Corman plunges into the murky world of Asian politics.

Corman's investigation of his son's death leads him into direct conflict with a cabal of hard-line American patriots, who are determined to wipe out the budding Chinese threat by nuking a scientific conference. Although these hard-liners first try to dissuade Corman through indirect means, it quickly spirals into violent action.

The February Plan has the trappings of a dated thriller.  Corman's relationship Finley (his secretary) is painfully misogynistic and his isolation from New York, a key part of the thriller, seems prehistoric in the era of the cell phone, internet and 8 hour flight. The Japanese, as expected, are merely quiet plot devices - there to provide a bit of information, a car ride or the occasional hot meal. All substantial interactions take place between the half-dozen Americans in the book.

There are few surviving fans of this beautiful and ponderous collectible card game, produced by the (now-defunct) Last Unicorn Games.

For the uninitiated, Heresy took place in a complicated, cyberpunk world where somehow Heaven and Hell have been crashed to earth via the internet. What followed is an apocalyptic scramble, as all the divine and infernal powers tried to claw their way home. You take the the role of some sort of unnamed power, instructing your minions (human and supernatural) to gain enough karmic power, or Tau, to take back out of the mortal realm.

Heresy had a few things going against it. First, I'm not sure it was ever actually play-tested. Although the 'guidelines' encouraged a half hour game, a 'quick bout of Heresy' was more likely to be a four hour marathon session, using every flat surface in the house. There are also a lot of unfinished holes - combinations that seem to lack the final card. Although an expansion (Project Demiurge) was in the works, a game's basic set still should have been entirely free-standing.

After my unfortunate encounter with 13 French Street, I thought I'd give Gil Brewer another try - and with The Vengeful Virgin, I struck gold.

Jack Ruxton, a small-time TV salesman hits the big-time when he's called out to do some work for the stunning Shirley Angela. Shirley, 18-going-on-unforgettable lives with her decrepit (and wealthy) step-father - forced to play the reluctant nursemaid in turn for vague promises of being written into the will. Hijinks ensue, culminating in the inevitable seduction, corruption and karmic reward for everyone involved.

If the above summary sounds like a paint-by-numbers noir plot, believe me, it isn't. I was left guessing until the end - and even now, I'm still stunned by how the cards fell. Not bad for a fifty-year old pulp.

Mary Stewart's This Rough Magic, published in 1962, tells the story of Lucy Waring, an out-of-work actress.

Killing time after her last show abruptly closed, Lucy decides to visit her pregnant sister on the beautiful island of Corfu. She soon learns that the island is swarming with mysterious characters - including a legendary actor, his composer son, a toff-stroke-photographer, a friendly dolphin and a host of naive natives.

Although I knew this was going to be a mystery (bloodshed - huzzah!), I approached the book with trepidation. As much as I like John Fowles, I'm certainly not up to re-reading The Magus during rush hour. Similarly, the cover hinted toward some sort of neo-Gothic monstrosity - dispossessed noblemen and philosopher-heiresses dash around quoting poetry and invariably becoming trapped in the bell-tower.

My worries grew - and I'm sorry to confess this, as it only reflects badly on me - when I discovered it was written in the first person. Not only, I worried, would I have to read about the insecurities of some vapid philosopher/poetry-quoter, I was actually being assigned to empathize with her. (Kind of like I've being doing with the post so far - get it?) 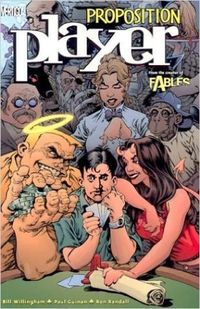 Five graphic novels about magic - including two brand-new collections, two classics and a reprint somewhere in between.

Proposition Player (Willingham / Guinan): This reprint of a cute little Vertigo miniseries feels a lot like a rough draft for "Fables", which, in all fairness, it probably is. There's a great set-up, but then plot goes a bit patchy - especially for the last third. The script feels like an awkward attempt at Douglas Adams, but doesn't even achieve Craig Shaw Gardner. Interior art is only ok... it, in turn, feels like an awkward attempt at Phil Foglio at points. The John Bolton covers (collected at the back of the book) are astounding.

Slaine the King (Mills / Fabry): One of the 2000 AD classics. I love the "Weird Tales"-style storyline and serialized feel. Great character (although loathesome), well-researched (or at least, filled with convincing lies) and buckets of tongue-in-cheek gore (at least, I hope it was tongue-in-cheek). Extremely detailed Fabry art makes me want to wash my hands afterwards, but really brings out the best (or worst) in Slaine and his world.

Just when I think that I couldn't possibly read anything worse than Innocent Mage, David Morrell descends to the challenge. I actually remember when Creepers was first released - the art of infiltration or "urban hacking" was something I had read about, and a stand-alone thriller from the author of The Fraternity of the Stone on the topic sounded pretty awesome. For some reason or another, I never picked up a copy. Now, unfortunately, I have.

Creepers tells the story of a small group of university students and professors who "infiltrate" abandoned buildings and do some exploring. The book is told from the point of view of Frank Balenger, a journalist who is tagging along for this particular expedition - a visit to the abandoned Paragon Hotel.

Donald Barr's Space Relations is a character-driven space opera from 1975. Despite the seemingly-humorous subtitle, it is a deadly earnest novel that attempts to tackle weighty issues with ostentatiously "literary" prose.

It tells the story of John Craig, the ambassador from Earth to the planet Kossar. Craig represents an intergalactic human empire, currently at war with a sinister bug people. Kossar, although human, is not part of the empire - mostly because the ruling aristocrats refuse to abolish the slave trade that is the foundation of their class system and economy.

The narrative is split in two. Initially (and ultimately) it tells the story of Craig's official visit to Kossar. In between, it recounts Craig's previous visit to the planet - two years spent as a slave of the fulsome Lady Morgan.

The war with the bug aliens is, although occasionally referenced, merely a MacGuffin to make Kossar (otherwise a backwater world in dire need of sterilization) important. Similarly, the complex, Machiavellian politics of the future - both in Kossar and on Earth - are often, tantalizingly, cited, but never fully explored.

Gil Brewer's 13 French Street is a predictably pessimistic tale of corruption, adultery and murder in a suburban household. Written in 1951, it was Brewer's first success, and sold a million copies over the course of eight printings. Brewer went on to be one of the key authors in the Gold Medal line, and developed a distinct and interesting voice as a writer.

However, as an early effort, 13 French Street, although one of his best-selling works, is also one of his worst.

The story begins on a (alas, not dark and stormy) night. Alex turns up at his friend Verne's door, a visit encouraged by Verne's wife, Petra. Although a surprise, Petra answers the door in her boobs...er... slinky black dress. Verne turns out to be an alcoholic wreck of a man. Although Verne blames his business struggles for his fragile emotional state, Alex quickly discerns that Verne simply isn't man enough for his wife and her spectacular boobs.

The flyleaf page of Karen Miller's The Innocent Mage has one of those action-packed excerpts on it, to reel in any interested browsers. It reads:

"Without thinking, Asher jumped into the path of the frightened horse. A lifetime of sailing boats in untamed weather had honed his reflexes and made him indifferent to danger. Catching those flapping reins was just like laying hold of a loose halyard in high winds; battling the beasts to a standstill not much harder than wrestling with a net-load of fish reluctant to die."

As a word of warning, this particular formula is repeated endlessly throughout the book. 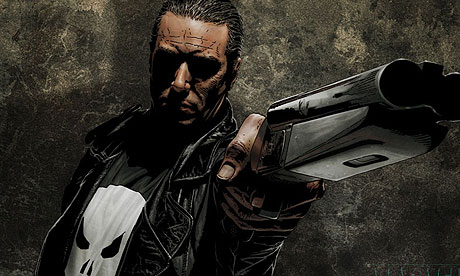 I can hardly quibble with the Marvel picks for the top 5. The bottom five, however, seems like more of a grab bag. Ka-Zar? Is it really that hard to fill out the list?! (Spoiler: Pretty much, yeah).