Northworld is a collection of three David Drake novels. Each takes place in the 'Northworld' - a set of eight interlinked planets, connected via an interdimensional soup called the 'Matrix'. Nils Hansen is a supercop for the Universal Consortium of Planets (or whatever). After previous attempts to figure out Northworld failed, Hansen is sent solo to see the sights.

In the course of all three books, Hansen explores the various aspects of the Northworld - including the lizard plane, the dinosaur plane, the plane filled with sentient computers and the plane populated solely by depressed fungus. Most of these explorations, however, are merely cursory.

The majority of Hansen's time in all three novels is spent in the Open Lands, a generic medieval world filled with by-the-book feudal types, waving around swords and doing their damndest to expand to the village next-door. The one twist is the introduction of power suits - incredibly high-tech battle armor (think Iron Man with a lightsaber). This adds a particularly lethal twist to the medieval shenanigans.

New Releases: The Blood of Elves by Andrzej Sapkowski 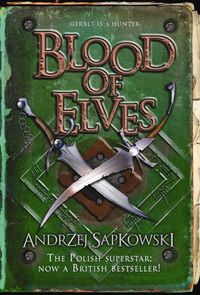 The Blood of Elves, by Andrzej Sapkowski, is the second book in the adventure of Geralt the Witcher. Sapkowski is already a best-seller in Poland - his books are now being translated by Gollancz/Orion for the fantasy-starved British markets.

It isn't often that I pick up the second book in the series before I've even read the first, but there's nothing ordinary about The Blood of Elves.

Geralt, the title character, is a 'Witcher' - one of a semi-secret society of monster-killing specialists. Already born as mutants (a word bandied around anachronistically throughout the book), Witchers are then trained and chemically altered to become killing machines. All hopped-up on primitive combat drugs and armed with meteoric swords, Witchers travel the world killing nasty beasties. Preferably for money.

Although Witchers are scrupulously neutral in matters of politics, Geralt has broken the code by adopting an orphaned princess, Ciri. The heir to a conquered kingdom, Ciri is one of the most valuable people in the world. The forces of light and darkness are both competing to find her - and that's even before her potent magical powers begin to surface. Geralt and his network of friends (more acquaintances) are drawn reluctantly into the vortex of events surrounding Ciri and soon become irrevocably linked to the fate of the world.

The $64,000 question, of course, is why we’d name our geek culture blog “Pornokitsch.”  Well, I’m an academic, and thus my favorite thing to do on rainy days and Mondays is pull things apart and talk about them.  So let’s talk about Pornokitsch.

Hooray for the 21st Century!

We now have a (slightly more brightly colored) Facebook page.

I put on Resident Evil (movie, not game) and it's 20 minutes in (now 25 minutes in) and WHERE ARE THE FUCKING ZOMBIES?  I saw Milla Jovovich's boob, but I'm not actually into boobs, and that was 15 minutes ago anyway.

What there is, besides that boob, is some INCREDIBLY LEADEN ACTING AND DIALOGUE ALL DELIVERED IN AFFECTLESS MONOTONES.

At right:  Milla versus the florescent lightbulbs.

(For the full review)

Stanley Ellin's Stronghold is an intriguing thriller, first published in 1975. Never afraid to take risks, Ellin experiments with both the structure and the content of the book. Ostensibly a straight-forward hostage caper, Stronghold quickly becomes an uncomfortably probing exploration of Ellin's own religious upbringing.

Stronghold is told from two aternating points of view. James Flood is a recently released convict, on a mission to make a lot of money and stick a thumb in the eye of society. Marcus Hayworth is a small-town banker and the leader of a small, local Quaker community. The men are polar opposites in almost every conceivable way.

James revels in violence while Marcus is a committed pacifist. James is comfortable in his leadership position - dictating orders to his criminal minions. Marcus, however, has a difficult time with his own role in his family and the community around him. James, at the start of his life, is committed to his philosophy of self-centered anarchy. Marcus, middle-aged, second-guesses his own achievements.