In case the forced title wasn't clue enough, no real theme to the latest grab-bag.

100 Bullets: First Call, Last Shot and Split Second Chance (Azzarello): I wanted to like 100 Bullets so much that I actually tried the second volume, even after being immensely disappointed with the first. The set-up is great: A mysterious agent arrives in your life. He has incontrovertible proof of someone that's done some sort of horrible wrong to you, a big honkin' gun and 100 untraceable bullets. What do you do?

The moral dilemma is terrific, and the possibilities are endless. The good guys, the bad guys, the crimes... limitless stories. And the parts of the series that focus on these stories? Those are the good parts. However, 100 Bullets rapidly gets caught up in the larger narrative. Who is this agent? Why does he do this? Is this a... conspiracy?! Honestly? I don't care. Stop world-building and write some stories! I love the covers - they're stark and intense. The interior art, however, disappointed me. Too cartoony to be taken seriously, and too detailed to be abstract - it seemed to be disconnected with the subject matter.

One of my favorite vintage private eyes, Shell Scott, is extremely quotable. Here's a longer passage from Kill Him Twice (1965) that I read on the way to work this morning:

This was Slade's latest, biggest, goofiest epic, Return to the Ghost of the Creeping Goo. Study that title, will you? If examined with a rapier-like intelligence it will tell you a lot. It will tell you too much. Yes, this was the third in the Goo series, which, perhaps, sums up the twentieth century. Future historians, probing the rubble of ancient Hollywood for our age's counterparts of stone tablets, for the antiquities of our constipated culture, may well find Return of the Ghost of the Creeping Goo and say, "Urp."

Then, being Shell Scott, he spends most of the book on the set of RTTGOTCG, admiring the film's many 'shapely tomatoes'. So things aren't so bad.

Ed Noon: Private Eye and Much Much More

Ed Noon is the hero of a long-running series created by Michael Avallone. His adventures began in The Tall Dolores in 1953 and continued through to the 1980s (including one unpublished mystery).

Ed Noon is the most bizarrely evolving protagonist I've ever read. Ed McBain and John McDonald both frequently tempered their long-running characters to fit the times, but neither Steve Carella nor Travis McGee can hold a candle to the bizarre biography of Ed Noon.

Noon begins as a fast-talking private eye in the Big City (Philip Marlowe, and others). His investigations then turn a bit trickier, and more 'clever' (87th Precinct). But not for long, because then the President calls. Noon solves a few quick cases the President's current 'fixer' (Chester Drum) - which turn increasingly into pan-European, anti-Communist sex-romps, showcasing the latest in espionage gadgetry (James Bond). As complicated as that sounds, it still pales in comparison to the 1980's, when Ed Noon fought off an alien invasion (?!).

The interesting thing, at least, judging by the half dozen Ed Noon books I've managed to consume... none of them are very good*. The light-hearted moments are fun, but Avallone consistently attempts (and fails) to give the novels some much-needed depth.

Noon isn't a captivating character - he's a stereotype. Even worse, he's a different stereotype in every book, so he's both unempathetic and inconsistent. This lack of emotional connection is what separates Noon from the characters that he's imitating - Marlowe was a wise-cracking misogynist too, but the reader cares about him. Steve Carella and his team solve a lot of very tricky mysteries - but they're also interesting as people.

The Ed Noon novels are talented imitations, but lack the heart to be successful in their own right.

*"None" is a little harsh. The Bedroom Bolero, for example, was pretty good. It is one of the most Chandler-esque of Ed Noon's early period, and has quite a bit to offer as a stand-alone mystery.

The Cat of the House of Pornokitsch isn't so smart, but he's got a vicious cunning that's served him well through the years. When combined with his unfaltering gluttony, he becomes a pretty ferocious creature.

His most horrifying trick (apparently he learned it about five years ago, when Anne was in law school and a really sound sleeper) is to stick his furry mitts on the bookshelf and start knocking things off. I'm pretty sensitive to the books (that is, I'm paranoid/obsessive), and generally the quiet rustle of a single endangered paperback is enough to get me shooting out of bed and looking for the cat food.

Apparently this night, I took a little more encouragement.

Richard Paul Russo's Unto Leviathan (originally published as Ship of Fools) is the story of the Argonos - a massive spaceship, floating aimlessly through the universe. The Argonos has been on the move for generations - so long that not only is its origin forgotten, but also its mission. Now, it travels from star to star, seeking a sense of purpose.

The story is told from the point of view of Bartolomeo Aguilera, the unofficial assistant to the ship's Captain. Bartolomeo is an outsider - born deformed to unknown parents - he lives in an exoskeleton of aggressively inhuman appearance. It is because of this perspective that he is so valuable to the Captain - Bartolomeo is unafraid of being unpopular.

The Captain, Nikos, is in a power struggle with the Bishop. The Church is a powerful entity on the Argonos and the Bishop is a strong and political man, with a desire to add the title of Captain to his collection. The ship's aimless wanderings have brought this conflict to a head - as the book opens, it has been 14 years since the last landfall and the thousands of people on the Argonos are all getting a little nervous.

Whatever happened to splatterpunk? For a while, it felt like all the rage in horror. Just as the seventies had the Antichrist, the eighties had apocalyptic disasters and the early nineties had serial killers... the late nineties had, well, really disgusting horror.

There were a few collections (not all of which were too terrible), but this particularly nauseating subgenre never really made good on its threat to go mainstream.

Blood, Jay Russell's foray into splatterpunk, has some potential - although it is worth noting that Russell's better efforts were in the urban fantasy Marty Burns books. But it is, ultimately, splatterpunk.

For the innocent, here's your pocket checklist for splatterpunk: 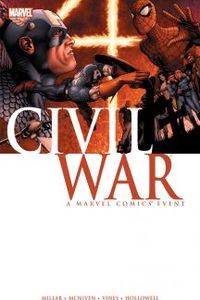 Another round-up of five graphic novels. This time, only the big names need to apply - Kirkman, Millar, Bendis and Ennis all feature with five epic titles from past and... recent past.

Civil War (Millar / McNiven): I know, the biggest event of 2007 and I'm just getting around to it. And, to be honest, if Forbidden Planet weren't flogging signed copies, I never would have. Still, I'm pretty impressed by the core concept of Civil War - it is both ambitious and timely. I also liked the focus on Iron Man and Captain America (especially the latter), although every other character felt a bit hard done by (including Mr. Fantastic, who got just enough page time to look like a total knob).

Unfortunately, as a stand-alone title or a miniseries, Civil War doesn't have much more depth than a What If? Christmas Special. I get the impression that if I dedicated myself to reading the seventeen-thousand other comic books in the continuity, it might be a richer experience, but it'd leave me a lot poorer. Plus, with Secret Invasion and Secret Crisis on Infinite Ultimatums coming out, why bother?

John D MacDonald's The Key to the Suite

The first impression is that this is a very graphic representation of a very dull scene, but the single shoe adds a surprising amount of tension (even more after reading the book). I'm also a fan of titles that 'break the fourth wall' in this way - that's very vintage marketing stunt, and I really like it.

Posted by Jared in Books, Mystery and Thriller | Permalink | Comments (1)

The Blood of Elves won't be released for another month, readers can get a head start on Sapkowski's fantasy series thanks to the previous release of The Last Wish, a collection of short stories featuring Geralt the Witcher.

Geralt is a trained monster-hunter, and the book takes him from one adventure to another. As the Witcher fights ghouls, vampires and djinni, the reader quickly learns that nothing is what it seems. The beasties are often the good guys and the humans the predators. Geralt is operating in a world in a state of change - the old ways are dying out, and the classical races like Dwarves and Elves are being pressed to extinction. As a Witcher, Geralt has adapted to the new world, by helping humans kill the monsters that prey on the outskirts of towns - but he doesn't do this without a twinge of guilt. More often than not, Geralt looks to cure, not kill - often to the disappointment of his bloodthirsty employers.

Set against this slightly angsty background, the short stories blatantly explore the familiar tropes of monster and fairy tales. Throughout the course of the book, Sapkowski retells the stories of both Snow White and Beauty and the Beast in unusual ways, and there are several other original encounters with traditional fairy tales.

Unlike The Blood of Elves, Geralt is actually front-and-center in all these stories. He holds up well under the added scrutiny. He's wise, but not annoyingly so, and competent, but not invincible. Although his distinguishing white hair and skill with the blade are slightly on the side of fanboy nonsense, Geralt is a well-considered and well-developed character.

A few of the characters from The Blood of Elves do make appearances, including Dandilion (still my favorite), Ciri's parents and, finally, the long-anticipated Yennefer. Unfortunately, the enchantress and love-interest of Geralt falters a bit. Although Sapkowski tries to imbue her with a bit of emotional depth with a melodramatic backstory, she's a overpowering brat, and Geralt's attraction to her is inexplicable. The idea that she just needed to be 'tamed' by Geralt's understanding is frustrating, offensive and surprisingly unoriginal.

Still, the Yennefer story (sadly, the title story) is the only place where this book falters. Geralt's adventures are exciting and unusual - an unexpectedly enjoyable combination of Joe Abercrombie and the fairy tales of Hermann Hesse.