Ed McBain's long-running series of mystery novels spanned fifty years and over fifty books. Based in the fictional city of Isola (with its eerie similarities to New York), McBain's conscientious cops spent thousands of pages chasing down every sort of villainous behaviour. From 1956 to 2005, readers were introduced to serial killers, money laundering, granny dumping and more.

McBain proved a savvy and adaptable writer - not only giving readers the latest in the substance of crime fiction, but also the style. This impacted everything  - the details (the police officers' salaries, political events), the methods (from card catalogs full of missing persons to the DNA database), to the crimes (muggings to cocaine smuggling) to the overall tone and voice of the books. Over fifty years, his characters change from innocent to jaded, the crimes become more dark and more detailed; the whole feel of the city changes from decade to decade.

Dead Folks (Lansdale / Truman): Sometimes, you just want to see zombies explode. Fortunately, Joe R. Lansdale understands your needs, and can provide for them, with Timothy Truman riding shotgun with the art. In Dead Folks, a bounty hunter and his quarry run into a mass of zombie evangelicals, including their mad scientist prophet and some buxom nuns. There's a lot of shooting, a brief break for exposition, and then some more shooting. This isn't Watchmen, but it doesn't try to be. Simply put, a finer example of bounty hunter/nun/zombie/scientist graphic fiction would be difficut to find.

Three more  - the Fantastic Four, Batman and Sherlock Holmes - all after the jump...

Catwoman: When in Rome by Jeph Loeb and Tim Sale 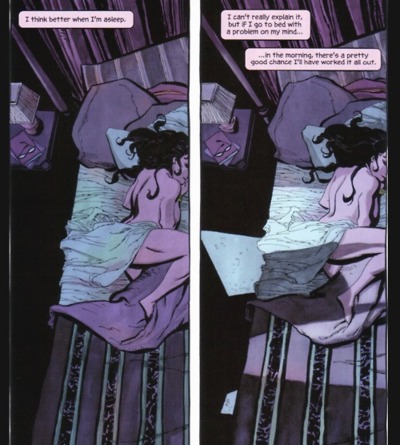 After wrapping up Batman: The Long Halloween and Dark Victory, the award-winning team of Jeph Loeb and Tim Sale tacked on a final mini-series, this one featuring DC's legendary femme fatale. Catwoman: When in Rome fills in a few gaps in the previous collections by going back and explaining what Catwoman was up to while Batman was busy lurking around Gotham City.

Bear with me for a second. I was very briefly in a role-playing group that included a guy (geeky, but friendly) who persisted in playing a female character. In hindsight, this was a really bad idea.

Because, in this case, the fellow ignored anything like 'self-awareness' and played a cat-woman. Pointy ears, frisky tail and over-sized boobs included (considerately, he brought a picture with him). While the rest of us tried to ignore him and fight the forces of evil, his character scampered around the demon dimensions shopping for chocolate and trying on clothes. Yikes.

Continue reading "Catwoman: When in Rome by Jeph Loeb and Tim Sale" » 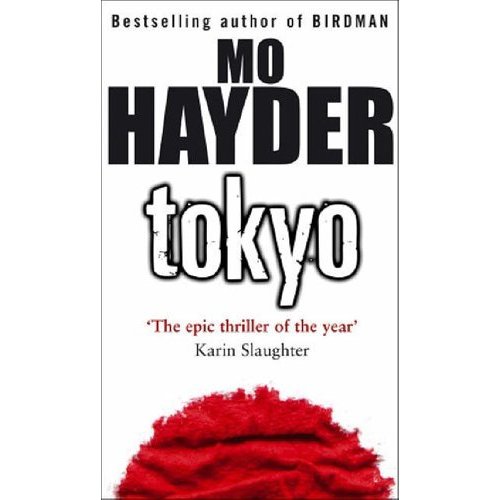 Tokyo (published in the US as "The Devil of Nanking" - proving once again that publishers think Americans are dumb) is an eerie thriller from English author Mo Hayder.

The protagonist is Grey, an unconventional English tourist, who has flown to Tokyo in search of a missing film about the Nanking Massacre of 1930. Her one lead is the mysterious Professor Shi Congming, one of the massacre's survivors. The book is largely told from Grey's prespective in the 'present' of the 1980's, with occasional glimpses of the past, as recalled by Professor Shi.

Hayder does a very good job of maintaining the delicate balance between the past and present. This is not an airport thriller, in which two intrepid (but robust) academics find the Lost Secret of the Inca-Bible-Judas-Machine and put an end to a Global Conspiracy. Instead, everyone in Tokyo is motivated by small, human (or horribly inhuman) and, critically, personal reasons. Finding the lost video won't save the world, but, as the reader learns from the outset, it would mean a lot to Grey. 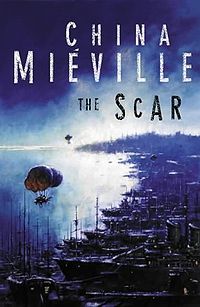 China Mieville's third book, The Scar, is cursed to be ever-overshadowed by his second, Perdido Street Station. The Scar, however, is a classic in its own right. A entertaining, absorbing and complex book, The Scar should serve to further seal Miéville's name amongst the greats of this (and any) genre.

Although The Scar takes place in the same world as Perdido Street Station (and has a few oblique references to some of the events of that book), it leaves New Crubozon behind and explores a vastly different city, Armada. Mr. Miéville is a practiced tease - rather than succumb to overtly masturbatory world-building, he gracefully dances around his exotic locations, leaving the reader desperately praying for another scene in the library. Or under the ocean. Or by the rift in the world...

Miéville has created one of the most compelling worlds in fantasy, and he's such a damn good writer that he doesn't even wallow in it.

Agrippa (The Book of the Dead)

Agrippa (The Book of the Dead) was a collaboration between William Gibson, artist Dennis Ashbaugh and visionary* publisher Kevin Bagos Jr, published in 1992.

Agrippa was (and still is) a pioneering piece of mixed-media work. As well as being a book, the whole of Agrippa included an art exhibition, a live radio broadcast and, perhaps most notriously, a floppy disk containing a poem by Gibson, which self-destructed after a single use.

Broadly speaking (and horribly summarizing) the theme of Agrippa is the transience of memory - every aspect of Agrippa was intended to be as ephemeral as possible - thus the one-off radio broadcast and the one-use diskette.

Continue reading "Agrippa (The Book of the Dead)" »