The IDW Publishing store sells signed copies of Ben Templesmith graphic novels at face value - including Welcome to Hoxford (just optioned as a movie) and the Wormwood series.

Just saying, if you're feeling a bit commercial and want to flip them on eBay, I can't see that as anything but an easy win.

Sara's Face (2006) is an intelligent, disturbing thriller from Melvin Burgess. Burgess is a popular (in the UK) author of young adult fiction, known for refusing to pull his punches. His books, despite their youth audience, deal honestly, openly and often graphically with drugs (Junk), sex (Doing It) and poverty (Lady). Sara's Face is Mr. Burgess's assault on the fame culture of modern, youth society.

Sara's Face is told as a cross between a mystery and a Lifetime biopic. An author is trying to reconstruct the tragic events involving Sara - a young wannabe - and Jonathan Heat - a disturbing and popular A-list musician.  The latter is a sinister cross between Madonna and Michael Jackson, combining all the worst traits of both.

David Brin and Scott Hampton's The Life Eaters and Si Spencer and Dean Ormston's Books of Magick: Life During Wartime.

The Life Eaters (Brin / Hampton): David Brin's short story, "Thor Meets Captain America" was nominated, rightfully, for a Hugo. It is an unusual - and bleak - take on alternate history, in which the Norse Gods pop down from Asgard to help Germany in World War II. In The Life Eaters, Brin adapts his own work into a graphic novel, and then extends the adventure.

Scott Hampton's work is stunning - beautifully painted scenes that do their best to add a certain Alex Ross-like gravity to the subject material. Unfortunately, he doesn't have much material to work with.

Brin, although an author of considerable talent, struggles with the comic book medium. Vast swathes of text dominate each page, and the graphic novel only intermittently drops down for brief interludes of dialogue and violence. 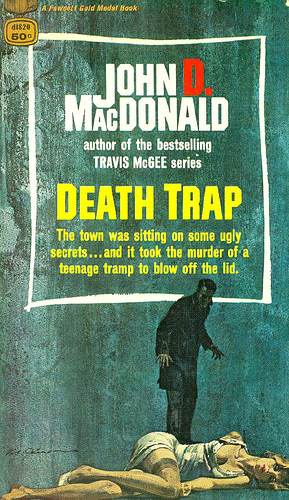 Hugh, a globe-trotting construction bum, spots that an ex-girlfriend's younger brother is about to be executed for murder. He is drawn back to a small Anytown in the hopes of helping his ex-girlfriend, Vicky, through the trauma - and also to ease his own troubled conscience.

Hugh invariably gets tangled up in detective work. Initially, he makes a haphazard effort to placate Vicky, but soon discovers that this small Midwestern town has a seedy underbelly.

It also, in the best JDM tradition, has a violent deputy and a politically-minded sheriff, neither of which encourage Hugh's amateur investigations.

Hugh's efforts lead him into the depressing swamp of small-town juvenile delinquency and the frighteningly rigid adult system that created it. Hugh's interactions with the town's sordid teen populate - and its deliberately-blind authority figures - are the highlights of the book. With his outsider's point of view, Hugh can see that the town is built on lies, desperately painting over the corruption to preserve the status quo.

The Onion's AV Club has put together a list of 24 other comic books that would make excellent movies. The list is of the usual quality (why are Onion critics so much better than normal critics?). Of the items I've read, there are only two that I wouldn't recommend for movies: