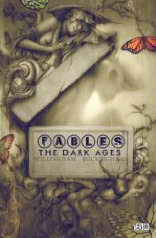 Fables: The Dark Ages (Volume 12 in the series) begins the first major 'post-war' storyline for the long-running Fables series.

The Fables are trying to come to grips with their unexpected freedom - they've spent centuries avoiding the Adversary, only to defeat him handily. Their newfound position as victors has come with a price - they have no idea what to do with the fragments of the Empire.

A few upcoming plot points raise their heads (including a tantalizing reference to a group of irritated 'second-generation' Fables and a return of the sinister Baba Yaga), but then everything is brushed aside as a new Big Bad suddenly surfaces: Mr. Dark.

I suspect, given the rather traumatic changes to the cast of Fables that take place in The Dark Ages, this is a deliberately intense collection - a rush to get everything in place so that the next act can get started. I would've preferred a long intermission.

Undeground Reading: What a Body! by Alan Green

Alan Green's goofily-named What a Body! was first published in 1949. It promptly won him the Edgar for best first mystery novel - an award that was exceptionally well-deserved.

What a Body! is a clever and entertaining mystery that combines complicated, Asimovian howdunnit with a host of hilarious and enjoyable characters.

What a Body! opens with the death of Merlin Broadstone, health guru. The statuesque, dictatorial Broadstone is shot in the back (from an impossible angle, in a locked room, etc. etc.). Although the book's omniscient, sarcastic narrator is quick to point out that everyone in the country had motive (Broadstone's calisthenics having worn a bit thin), only a few had the opportunity - the murder taking place at the opening of the Broadstone resort on a remote island.

Continue reading "Undeground Reading: What a Body! by Alan Green" »

The Summer 2009 issue of Nude has an in-depth interview with everyone's favorite writer/warlock, Alan Moore. It covers his thoughts on pornography (yay), his movies (boo) and his recent projects - but it also gives some tantalizing previews of what's coming next: The Moon and Serpent Bumper Book of Magic and Jerusalem.

When finished, it will be a half million world-long tome and will have had no editor (save a coma [sic] and colon-checking perusal by friend Steve Moore, no relation) and may be published by Top Shelf. Unshackled from the mind-forged manacles (or at least from publishers and collaborators and deadlines), Jerusalem might possibly become Moore's magnum opus. Or by working totally unchecked Moore might just out the worst thing he's ever written.

The book defies description - including aspects of a Samuel Becket play, 'the Famous Five from beyond the grave' and other random phrases that all seem pulled from a hallucinatory hat. The first - and most powerful - sidekick in High Fantasy is invariably the wizard.

The wise and enigmatic mage pops up in chapter 2, generally armed with explosive revelations of Hidden Destiny, Prophecy and Big Brooding Evils.

So, pretend you're a stableboy that just learned you have a Magical Destiny. You're about to hike off on your journey to face the big bad, so which wizard are you taking with you?

- Try to be specific - so for legends and classics (e.g. Merlin), try to tie them down to one book or series.

- The definition of 'fantasy' is pretty broad. As is 'wizard'. More argument, less rules.

- They have to be a good guy - or, at the very least - on the same side. This is for the Companion, not the Dark. So Voldemort is out, but Snape is ok (please don't turn this into an argument about Harry Potter).

The heritage of the science fiction story - in the tradition of Asimov, Campbell, Harrison, etc - is based on the 'great leap forward'. Imagine one technological shift or one burst of genius, and then wildly extrapolate the results.

Asimov's robots are a perfect example - one massive assumption (innovation in robotics - BOOM!) and then thousands of pages of follow-through. Asimov's work on robots deserves special note because he didn't stop at the 'ain't it cool' stage, but also diligently worked out the social, political and personal ramifications of the new technology.

Another good example - albeit on a smaller scale - is Stephen King's "The Jaunt". This short story is about the invention of teleportation technology (BOOM!). It details the moment of genius, the immediate roll-out and the social ramifications of instantaneous travel.

This thinking dominated science fiction for decades (and still exists) - the science fiction world is composed of genius innovation and the social repercussions of its existence.

The grimpunk differs from traditional science fiction at this, the most fundamental level. In a grimpunk future, the world is projected forward, but without the initial evolution in technology.

1) The innovation never happened (and never will). Scientifically, what we've got now is all we'll ever get, except maybe some minor tweaking. Fundamental shifts in technology (cold fusion, FTL travel, nanotech, cybernetics, artificial intelligence) aren't happening. The spaceships of the future are the spaceships we have already, just with more mileage on them.

This is fundamentally hopeless - as it implies humanity has reached the end of its capability to grow. There are no further transformational flashes of genius.

2) The innovation happened, but the system crushed it. Grimpunk worlds invariably reference huge bureaucracies (government and corporate) with well-entrenched positions and selfish motivations to quash progress. FTL drives are sitting in a crate somewhere. The funding got pulled at the last minute. The oil companies wouldn't let it happen. The scientist with the genius intellect was pulled off the project used to make new potato chip tubes instead.

This is a different sort of despair. Individual humans still have the capacity for creative thought... it just doesn't matter.

7 Foot Shelves
The Accidental Bard
A Boy Goes on a Journey
A Dribble Of Ink
Adventures in Reading
A Fantasy Reader
The Agony Column
A Hoyden's Look at Literature
A Journey of Books
All Booked Up
Alexia's Books and Such...
Andromeda Spaceways
The Antick Musings of G.B.H. Hornswoggler, Gent.
Ask Daphne
ask nicola
Audiobook DJ
aurealisXpress
Australia Specfic In Focus
Author 2 Author
AzureScape

Kat Bryan's Corner
Keeping the Door
King of the Nerds

OF Blog of the Fallen
The Old Bat's Belfry
ommadawn.dk
Only The Best SciFi/Fantasy
The Ostentatious Ogre
Outside of a Dog

Walker of Worlds
Wands and Worlds
Wanderings
Wendy Palmer: Reading and Writing Genre Books and ebooks
The Weirdside
The Wertzone
With Intent to Commit Horror
The Wizard of Duke Street
WJ Fantasy Reviews
The Word Nest
Wordsville
The World in a Satin Bag
WriteBlack
The Written World 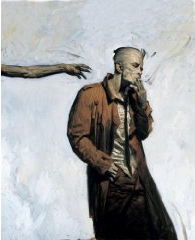 Although the collection is... ok (not bad, but certainly worthy of its mediocre rating), it mostly serves as a reminder of how the title - if not the entire industry - has progressed in the past 20 years.

The art and colors feel dated, and the Thatcher's-Government-Is-Out-To-Get-You plotting by bureaucratic evil-doers has been replaced by much sleeker military-corporate conspiracy theories over the past two decades.

A Freemason/Corporate/Government conspiracy (involving black wizards and corrupt cops) has built a 'fear machine' - raising a giant Freemasonic Lovecraftian beastie by using psychics to suck fear into a big Stonehengey box. Fighting for the good guys? John Constantine, of course. This time, he's aided by a group of travellers - gypsy renegades who live off the grid and practice oddball nature magic. 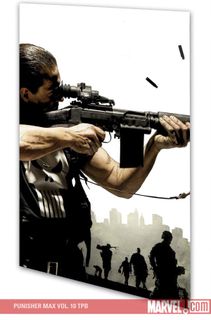 Punisher MAX: Long Cold Dark and Valley Forge (Ennis): Garth Ennis' latest run on Punisher is one of the highlights of the last decade in comics writing - perhaps its only comparison is Bendis' ground-breaking run on Daredevil.

From the first issue, Ennis redefined, modernized and revitalized one of Marvel's most difficult characters. The Punisher became human, frighteningly sane and indescribably scary. Ennis moved him from a four-color 'bullets never kill' world to a nasty, lethal, intrigue-punctuated, chaotic analogue of the real world - and the Punisher changed from a B-list to something very special.

Despite the ultra-violence, Ennis made this latest Punisher a serious figure (although his goofier, earlier run on Punisher is also worth investigating). Like his work with Preacher, the Punisher was a means of identifying and exploring serious themes - bringing order out of chaos, the limits of sanity, morality vs necessity, and even a bit of old-fashioned Americana.

"Because it is the triumph of a lack of planning –both for good and bad. It's chaos –and whether you say that with a gasp of despair or glee or both is up to you. Whereas Paris (certainly in the centre) is the success of a single overarching monomaniacal topographic vision, London is a chaotic patchwork of history, architecture, style, as disorganised as any dream, and like any dream possessing an underlying logic, but one that we can't quite make sense of, though we know it's there. A shoved-together city cobbled from centuries of distinct aesthetics disrespectfully clotted in a magnificent triumph of architectural philistinism. A city of jingoist sculptures, concrete caryatids, ugly ugly ugly financial bombast, reconfiguration. A city full of parks and gardens, which have always been magic places, one of the greenest cities in the world, though it's a very dirty shade of green –and what sort of grimy dryads does London throw up? You tell me."

From Shared Worlds, which looks like it was fantastic.

Much to the bewilderment of all, the New Yorker ventured into the unknown and posted a list of 'seven essential fantasy reads'.

In its defense, the list is well-written, and is composed to the interesting brief of 'going to second base - what do you read after the standards?' (specifically mentioned, Harry Potter, Lord of the Rings, Narnia and... Twilight).
We've done something like this in the past on Pornokitsch (thinking of our 'graphic novels to seduce fans of the Watchmen movie' post). It is a slightly different take on things, and should be encouraged - new readers to any geeky genre are a good thing.
THAT SAID, this list meanders between the baffling and the mediocre.