Spending a long weekend in Boston. Any bookstores we should be hitting while we're here?

Hands down, the most fascinating Gold Medal author? E. Howard Hunt - who lived a life as exciting as any of his detective heroes.

Hunt worked for the CIA and then for President Nixon. Alongside the notorious G. Gordon Liddy, Hunt was one of the President's "plumbers" - private operatives to Nixon, out to fix 'leaks'. Hunt was one of the figures behind the Watergate scandal, serving almost three years in prison for his role in wiretapping the hotel room.

Posted by Jared in Books, Mystery and Thriller | Permalink | Comments (3) 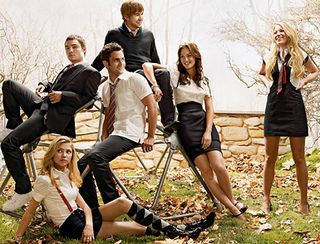 To lead with the conclusion: the 18-episode first season of Gossip Girl was fantastic - a shameless and mesmerizing look into the sleazy lives of New York's over-privileged teens. I have a hard time resisting more-ish teen soaps, and, in the case of this show, I'm glad I didn't.

The shows are introduced and - loosely - narrated by the enigmatic 'Gossip Girl'. She's an upper-crust blogger that keeps the plot moving by circulating tips. She's also voiced by the (uncredited) Kirsten Bell, who does the job in her snarkiest Veronica Mars 'I'm making fun of the rich people' accent, which is good fun.

To get the criticism out of the way, Gossip Girl suffers from the same genre failings as virtually every other teen drama: 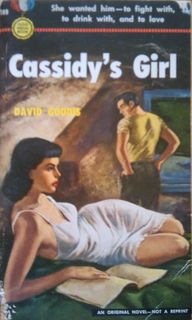 With the possible exception of Ace Doubles, my favorite vintage paperbacks are the under-appreciated Fawcett Gold Medals.

In 1950, Roscoe Fawcett launched a line of original paperbacks - he was prompted by a somewhat restrictive contract that prevented him from launching original books, and he felt that paperbacks could be snuck out the door without violating the agreement.

The books took off like wildfire - Fawcett effectively launched the American paperback originals industry (the Penguin of the States), and, with it, the careers of hundreds of new authors. On the downside, Gold Medal probably killed off the struggling pulp magazines. Sorry.

For no particular reason, here's an utterly arbitrary list of five terrific authors to have published original fiction in the Gold Medal line:

An odd choice for number one, but Cassidy's Girl might be the unofficial flagship book for the entire Gold Medal line, and Goodis is the equal of Chandler and Hammett when it comes to noir. A half-dozen of Goodis' other books first saw the shelf as Gold Medals, including some of this best, like The Moon in the Gutter and Street of No Return.

Yup. I'm cheating already. But Ellison had a single first edition from Gold Medal - Rockabilly. Vonnegut had two - Canary in a Cat House and Mother Night.

My favorite author (sorry about the bronze, John) and one who accounted for a substantial percentage of the entire Gold Medal output. MacDonald published his first Gold Medal original in 1950 and his last in 1973. Much of JDM's best work came out as a Gold Medal original - from the first appearance of Travis McGee in The Deep Blue Goodbye to one-off thrillers The Beach Girls, A Key to the Suite, The Only Girl in the Game, The Drowner and The Neon Jungle.

You've never heard of him, but Prather sold a billionty books (40 million!) featuring the LA private eye, Shell Scott. The broad-shouldered, silver-haired Scott is the epitome of the wise-cracking private eye, and Prather had a uniquely hilarious turn of phrase that guaranteed that each and every Shell Scott mystery was a blast to read. Largely - and sadly - forgotten.

The bulk of Jim Thompson's work was first published by Lion, but three of his later books came out as Gold Medals, including Pop. 1280 and South of Heaven. 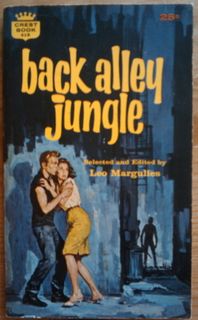 Which makes finding an anthology that contains contributions from the elusive "Hunt Collins" and the even more elusive "Richard Marsten" quite a treat. (The awkward homo-erotic pornokitsch title is just a bonus.)

I know that these aren't McBain's most well-known pen names (Evan Hunter?), but it is always feels like I've won a battle of wits with the bookseller whenever this happens.

Nine maXcrime titles will be published in 2010, all mass market paperbacks priced at £7.99, in what is described as a "commercial" but very varied list, covering hard-boiled, historical, cosy, women-oriented crime and crime in translation.

Jakubowski said he had received a "call out of the blue" from John Blake asking him to set up the list." -- the Bookseller

Jakubowski has great taste. As well as editing many anthologies, he is responsible for the Blue Murder imprint, as well as the nine volume set of Black Box thrillers from Zomba books (thanks to Anne, finally completed the set with the Woolrich volume, below). Finally got my paws on a couple books from the infamous sleaze publisher (check out this lovely site for a full cover gallery), thanks to a terrific shopping binge in Lyme Regis. The Late Mrs. Five, by Richard Wormser, is a clever 'falsely accused' mystery published as a Gold Medal original in 1962.

The hero, Paul Porter, is a traveling salesman in the wrong place at the wrong time. While paying a visit to the small, Midwestern town of Lowdesburg, he finds a promising client and a more promising flirtation, but then winds up accused of murder.

It seems that Porter isn't the only outsider in town - his ex-wife, she of the long legs and greedy mitts - has preceded him. As much as he'd like to ignore her existence, this swiftly proves impossible - what with her untimely murder and all.

The circumstantial evidence is well-stacked against Porter. The police chief is determined to see Porter fry as well - partially out of his own insecurities, and partially because Porter is getting a little too chummy with his foxy daughter. Fortunately, the daughter proves a worthy ally, as does Porter's suave defense attorney. Another helping hand comes in the form of the police chief's own father - a crotchety old curmudgeon that admires Porter's spunk (in-between complaints about having to eat soup all day). Something Burning, by Norman Daniels, is an unconventional thriller set against the background of a forest fire. Published as a Gold Medal original in 1963, the book combines brilliantly-created set-piece plot twists with a thoroughly loathsome protagonist.

The latter is Ben Medford. Ben's wife has just passed away after a long illness, and Medford is doing his best to follow her. The book opens immediately after he's driven his car off a cliff. Ora, a mountain girl with pure heart and tarnished loins, has pulled him from the wreckage and is nursing him back to health. Although initially reluctant to return to the realm of the living, Medford pulls it together long enough to chase off some hillbilly attackers. By saving Ora (in turn), Medford briefly becomes committed to living again.

Alas, happiness is not to be (plus, we're only in chapter two at this point...)

Love Serpent's Tail - they're the Black Lizard of Britain.

Their newly-announced 'classics' list is very similar to books they've printed already, but anything that keeps Horace McCoy on the shelves is good news. And I look forward to seeing the new cover designs.