Being evangelical about genre fiction, I have a tendency to make long mental lists of 'must reads'. What follows are 35 books* that I consider essential fantasy.

I don't think the books on this list are the best - in fact I downright loathe a few of them (I'm looking at you, Tigana). However, I do feel these all reflect some aspect of the genre that I think is important to understand - if not necessarily enjoy.

I'm also a bit of a stickler on definitions of "Fantasy". I get really wound up by over-thought lists that include things like Moby Dick - that always feels like a passive-aggressive way of defending the genre. When I'm talking about "fantasy", I mean elves, talking swords, dragons & chainmail bikinis, dammit.

Here were the rules:

I divided Fantasy into four broad and incredibly subjective categories (Modern, High, Classics & Unclassifiable). Each author was only allowed one entry (although I stretched this a bit - justifiably - with Eddings, Gygax & Tolkien).

What'd I get right? Wrong? Tell me in the comments. If there's any sort of interest, I can add some vague annotations. But, right now, it seems more fun to provoke wild speculation (and hopefully some heated debate).

The Mad Hatter scored an interview with Paul McAuley, author of The Quiet War (amongst others - I rate Pasquale's Angel as one of the more intriguing alternate histories).

An audio recording of James Holloway's recent lecture at Treadwell's (London) is available (for free, no less) from Yog-Sothoth. Holloway's speech, 'The Lairs of Cthulhu', was on Lovecraft's use of archaelogy and myth in the Cthulhu mythos.

If you're interested in seeing a comic book come to life (and a good one, at that), check out the progress of DECONSTRUCTED. The writer (Den Patrick) and the artist (Chris Christison) are both blogging simultaneously as the project explodes. I was treated with an advance copy of the script, and it looks fantastic - a quasi-grimpunk space fantasy that's being brilliantly brought to life in the early illustrations. 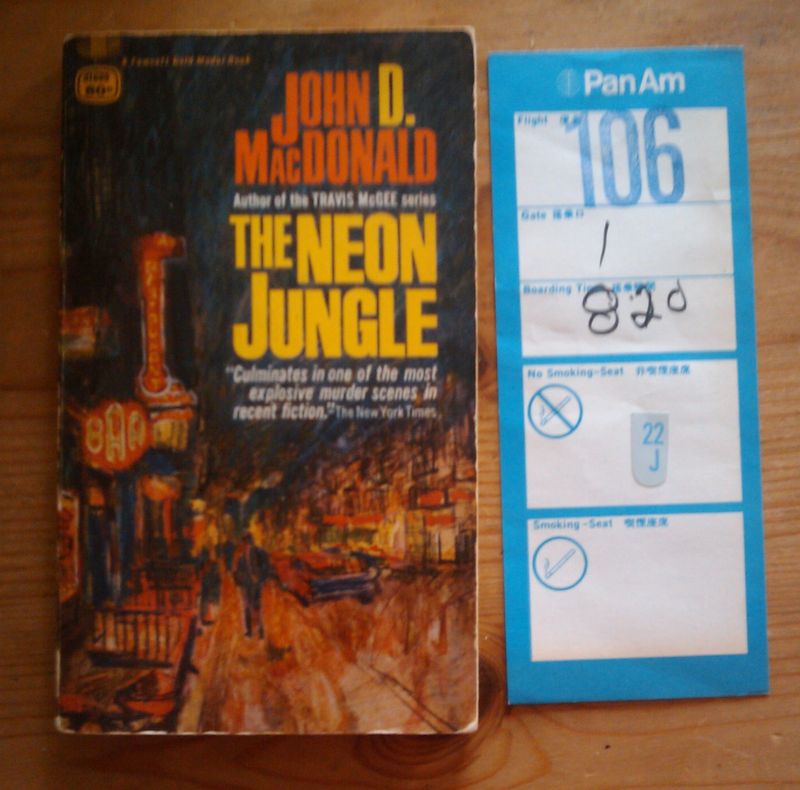 Ages ago (2007), I had a brief-lived but well-meaning blog called 'Things I Found in Books'. It had a clear purpose - a photo-journal of...er... things I found in books... - but suffered from a lack of success. Mostly because it was boring and self-indulgent.

Still, I find this sort of thing fascinating. 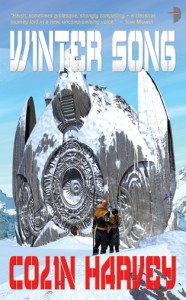 I am, by nature, a forgiving person.*

So, despite the debacle of Kell's Legend, I decided to give Angry Robot a second chance. The publisher is filling shelves with new genre fiction, which is no bad thing. And I applaud their enthusiasm (if not their editing, proofreading** or taste). So, with an open mind, I returned to Angry Robot for another of their launch books: Colin Harvey's Winter Song

I'm glad I did. Although Winter Song still isn't the cutting-edge science fiction that the imprint promises, it is a genuinely solid effort that made my morning commute a lot shorter. Literature, it ain't - but Winter Song combines good storytelling and strong (but not overwhelming) world-building to make for an entertaining read. It doesn't push any boundaries - if anything, this is a throwback to the Ace or DAW era. But that's no bad thing.

Winter Song takes place on a desolate, icy world in the backwoods of space. After a brief kerfuffle with space pirates, Karl Allman crash-lands on this hillbilly snowball. Fortunately, he's not totally alone - the planet is home to Icelandic space colonists. These Nordic stragglers have been cut off for centuries and, although they're still keeping alive and using space-age technology, they've regressed quite badly from a social standpoint.

Probably the latest review of BICS material on the wonderweb (or the earliest for next year), but I needed the time to gather my thoughts after the huge hordes of material that I looted.

Here are four of the best graphic novels that I found at this year's convention:

Disrepute (Thomas Ferrier): This 16 page chapbook may be one of the best finds I made. Disrepute is half-satire, half-diary - the musings and anecdotes of Thom Ferrier, who is also a practicing doctor.

It is surprisingly intimate and extraordinarily powerful. With striking illustrations and the stand-out binding, this is a hard comic to pass by. [Only available for purchase directly from Ferrier, but it costs a mere £5. Buy this book.]

I'm normally not too fussed about anthologies (I'm still heartbroken over my contribution to The Last Dangerous Visions), but this - Swords & Dark Magic

This looks great (especially for those of us eagerly awaiting the next Lynch or Abercrombie release).

Joe Abercrombie let slip that there will be a swanky edition published from Subterranean Press. No word from them yet, but that sounds like something worth noting. 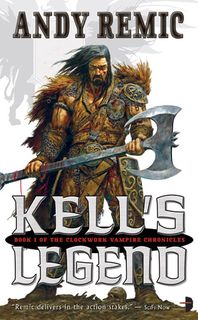 Kell's Legend is the first in the Clockwork Vampire Chronicles, a new, low fantasy series from author Andy Remic and fledgling publisher Angry Robot. (Well, what with being owned by HarperCollins, this is a fledgling from a feathered nest...)

I've read worse books (but not many), but Kell's Legend is extraordinary in that it becomes so bad, so quickly.

In fact, I can point out the exact moment...

On page fifteen, the protagonist's moppet of a grand-daughter exclaims:

"Grandpa! You don't speak to a lady like that! There's this thing we learned in school, it's called eti... ettick...".

Grandpa Kell ruffles the hair on her cute little head and explains to her that she's seeking the difficult word "etiquette".

THE GIRL IS SIXTEEN. "Nearly seventeen!", she shouts at the top of that same page.

I don't claim to have any sort of secret knowledge of sixteen year old girls, but I'm pretty sure that they are beyond adorably tripping over words like "etiquette". And, although this isn't the end of the world, this is a pretty good indicator of a terrible book. 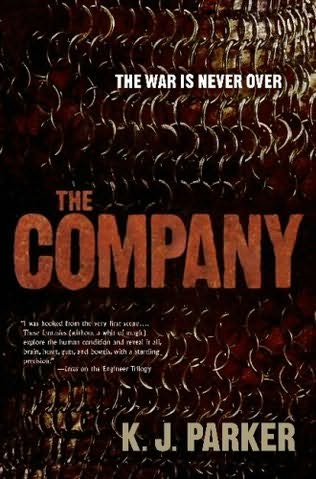 KJ Parker is a Pornokitsch favorite - a terrific author proving that proper fantasy is about characters and themes, and not merely elaborate world-building.

Whomever he or she is, Parker is a hell of a writer.

Happily, The Company, newly released in the UK, is up to Parker's standard level of brilliance.

The Company is a tightly-plotted thriller about a handful of ex-army men trying to found their own escapist, Utopian paradise. Think J.G. Ballard crossed with Joe Abercrombie - extraordinarily flawed and angry men trying to build a perfect world (for them).

I finally cracked the top 5,000 Amazon reviewers. (Hard work, that!)

Every time a review is posted here, it is also posted on Amazon (albeit with less naughty language). You'll see it in the little 'Amazon reviews' box on the left-hand side of this page. If you've got a moment, pop over and give it a thumbs up.

And, of course, every time you buy something on Amazon - after going through that link - this site makes ENTIRE AMERICAN PENNIES. Oddly, I'm less fussed about that than the review ranking. Share your opinion, save your money.

Speaking of money, I've crawled up to #24 in Horace Bent's (the editor of the Bookseller) fantasy 'book' league, in which competitors select the best-selling books for the fall & holiday season. #24 ain't bad - especially when you consider I'm merely a know-it-all amateur, up against professional! Anything other than last place is a coup.

So, there you go:

Pornokitsch: somewhere between the 24th and the 5,000th-ranked opinion on the Internet. 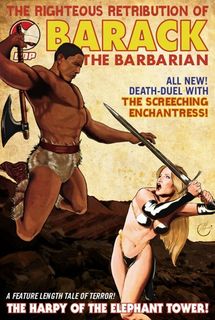 Ok, stableboy-that's-secretly-the-High-King, you've got your Wizard companion, but how about the Warrior?

A few ladies may make the grade, but, in High Fantasy, the Warrior role is almost exclusively male. This archetype exists to prepare the hero for the inevitable physical challenges that will occur - and a few emotional ones as well - training in the manly arts of manly swordsmanship and manly honor.

So, here you are, stableboy, you've got a lot to get done and need someone to watch your back...

(Rules below the jump)