If you're in Kansas City, and can take a break from the ten zillion must-eat restaurants, Spivey's Books is a destination bookstore. It is a rambling, creaky building with a vast basement, sprawling ground floor and two distinct second floors (seriously bizarre layout).

The hardback SF/F collection isn't great, but there's a huge collection of vintage paperbacks and a mystery section that goes for rooms and rooms. It is also really easy to get lost in the ephemera - postcards, posters (from 1960s blacklights to movie posters to bizarre European stuff I don't understand), prints, clippings, magazines, bookplates, etc... Everywhere you turn, there's another box of interesting 'stuff' that invites discovery.

The prices are also very, very reasonable (especially if you're used to London). It becomes very easy to wander up and down creaky stairs for the better part of a day...

On an excursion back to North America for the next two weeks - visiting family in Kansas City, celebrating an anniversary in Chicago and then doing a brief spot of work in Toronto. I've got the first two covered for book & geekery suppliers, but if anyone knows any good shops in Toronto, please let me know...

One thing I've already discovered is Poptopia - less than a year old, but going strong. Conveniently located across the street from KC's best ice cream, Poptopia is the brainchild of design fiend Patrick Mar. I've only window-shopped (so far), but Patrick was great, enthusiastic and a paragon of good, geeky taste. Where was this place when I was in high school?!

Fascinating (if you like geeky things - a fair assumption if you're at this blog anyway) survey of the literary inspirations for Dungeons & Dragons.

Tolkien always gets the credit (for pretty much everything), but the author tracks down the references to Burroughs, Vance ("MAGIC!"), Howard and Leiber. All well-earned. The Lovecraftian connection was initially a little tenuous, but, upon reflection, I'm willing to grand mind flayers a Cthuhloid inspiration (creepy, squid-faced, mental attacks... alright...) 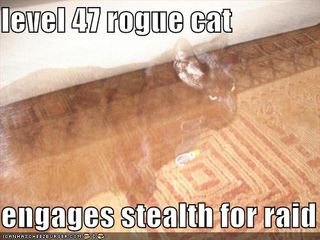 The Rogue archetype in high fantasy has always been my favorite - I suspect that's because in most books, only the rogue is ever allowed to evidence any sort of personality. Dirty jokes? Second thoughts? Acknowledgement of having a life outside the Epic Quest? All fall to the Rogue.

In high fantasy, the Rogue has a teaching role as well. If the Wizard is out there revealing the True Magical Nature of Things, the Rogue's role is often to show the Seedy Underbelly of the Way Things Are. The Wizard talks about big evils, the Rogue shows off the little ones. 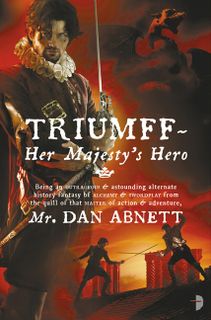 Triumff: Her Majesty's Hero takes place in a goofy alternate reality, in which the merged British & Spanish Empires rule the world. Magic has precluded any use of technology, Elizabethan culture still prevails and Shakespeare (or pornographic updates thereof) is still on stage.

The book stars Sir Rupert Triumff. Triumff returned from discovering Australia about a year ago, and is doing his best to avoid the attention of court (mostly by drinking himself senseless). Unfortunately, he can't keep Australia to himself - too many of the court factions need him to essentially 'sign back in' so that the official, Imperially-blessed looting can begin.

To add to Triumff's woes, he's also caught in the middle of a dastardly plot. Under the leadership of a necromantic Bishop, a group of disgruntled noblemen are making a bid for power. Triumff, much to his chagrin, is set up as their bait/victim/fall-guy/pawn. With the help of his friends and (often-unexpected) allies, Triumff has to save the Queen, Britain, Australia and the whole rest of the Empire. 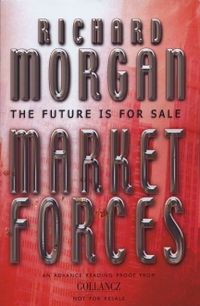 I spent the weekend field-testing my new Kindle - a lovely, if controversial, beast.

Overall, I was shocked by how quickly I forgot that I wasn't reading a book. The screen is perfect - no eye-strain, no problems. The one potentially-annoying hardware flaw is the 'flash' of the screen as each page changes - but I stopped noticing that surprisingly quickly.

I've broken down my thoughts in a traditionally geeky fashion: hardware vs software. And in both areas, the Kindle excels. However, I did have some major problems...

Hardware-wise, there's a lot going for the Kindle. The battery life is great. I read the Kindle constantly all weekend, and never had to charge it. The 'next page' button is on both sides of the device, which is surprisingly useful when 90% of your reading takes place whilst stirring macaroni and/or fending off a cat. The one real flaw is the miniature joystick interface, which is overly fiddly. 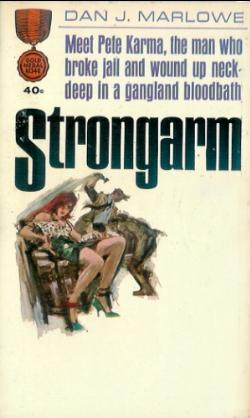 Strongarm (1963) is a standalone vengeance thriller from author Dan Marlowe. Marlowe is best known for his Earl "The Man With No Face" Drake thrillers - a hard-boiled (if formulaic) 1970's series of action/espionage novels. More notably, Strongarm is sandwiched in between two of Marlowe's best - One Endless Hour (1962) and Never Live Twice (1964).

Strongarm has all the hallmarks of Marlowe's hard-hitting style. The narrative jumps around freely - beginning smack in the middle of the action, then incorporating reminiscent daydreaming to cover all the background.

In this case, we begin with a car crash.

Pete Karma, on a mission of revenge, is shadowing a mob courier - only to see the man crash into a second car. A mysterious briefcase (arm still attached) bounces to Karma's feet - he grabs it and runs.

From there, it gets messier.

(spotted over at Grim Reviews) 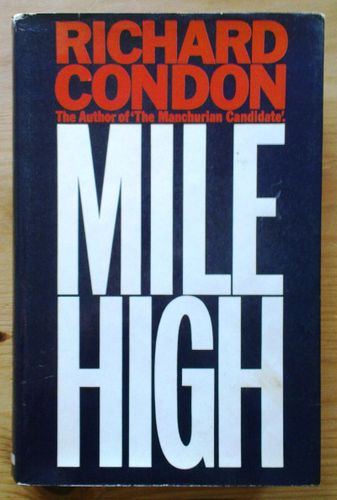 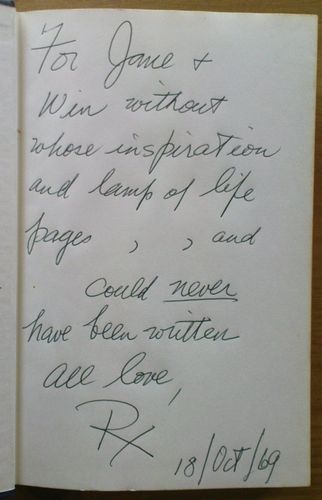 Underground Reading: Murder in a Nunnery by Eric Shepherd 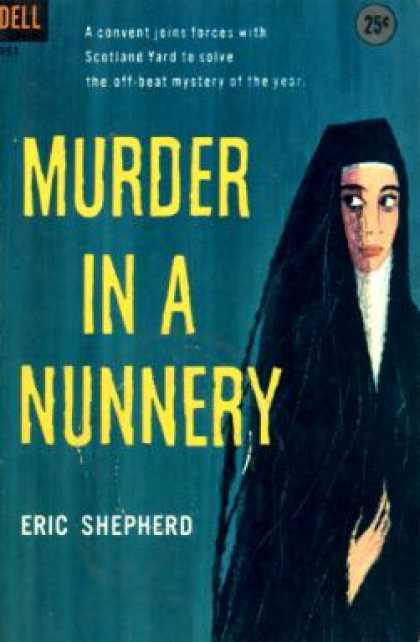 First published in 1940, Murder in a Nunnery is a charming, traditional whodunnit set in an unusual location.* It is also - oddly & enjoyably - the least tense thriller in the history of the genre.

Combining a sly sense of humor with adorable characters, this book is less about the gory business of solving a murder than the intricacies of having a nice cup of tea. In fact, the reader has to be occasionally reminded that there is a dead body at all (that of the unlikable Baroness Sliema), as the characters are much more bogged down in their day-to-day life and the occasional cricket game.

Chief Inspector Pearson, the book's detective, is the major source of this particularly laid-back investigation. He's so wonderfully British that his tea practically sips itself (and then apologizes profusely for the inconvenience).

He meanders happily from one corner of the convent to the other, lingering over breakfast, chatting with the gardeners and only really getting worked up when one of his patrolmen fails to hold the door open for the ladies.