This is the nth (4th? 5th?) time that we've been to the MCM Expo and I think a few of the patterns are becoming pretty well-established.

1) Be under 18. Were I still young and unselfconscious and a massive nerd (well, I've clung to one of three...), MCM would be nirvana. Pocky-noshing, squirrel-eared teens are everywhere - draping themselves on every possible surface, moving around the room in tightly-packed, chittering flocks, trailing hormones behind them.

The convention was simply packed to the gills with happy adolescents, all of whom were meeting their chatfacebookspace friends for the underage party to end all underage parties. Frankly, it looked like a lot of fun.

Saturday, we'll be at MCM - trying to patch things up with Warren Ellis and help out pitching DECONSTRUCTED. (Are you a publisher in need of a badass new comic? Find us!). Sunday, we're going from pocky to posh, and visiting the PBFA International Book Fair in Russell Square. Monday? Rest. As always, if you spot us, say hi! 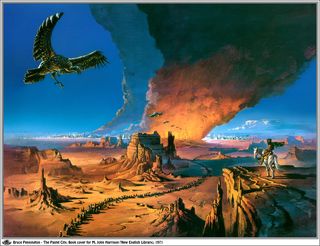 So much ink has been spilt over M. John Harrison's The Pastel City over the years that there's little I can offer that hasn't already been said better elsewhere.  Instead, I'll tell you what most struck me about the little novel - its economy.  Harrison's novel is a wonder:  in a quarter of the time a modern fantasy author would take, Harrison builds a world, develops characters, and tosses in some major action sequences, a dirigible and a mechanical vulture (inspiration for Harryhausen's Bubo, perhaps?) all in 144 pages.  The Pastel City isn't just a quick read, it's a satisfying story - and that's saying a lot.

Why is it that science fiction authors tend to assume that, after the apocalypse, mankind will revert to a pre-industrial European state?  Perhaps they're merely inspired by the vision of men wearing fluttering capes and romping around on horseback through the ashes of our modern world.  It's certainly a compelling image.  (See, e.g., at right; the cover art for my copy of The Pastel City.)

Only a Sultan could afford it... 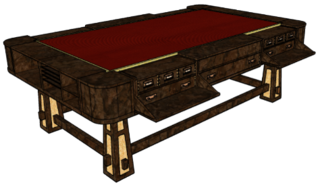 Would you? Could you? Nearly $9000 on a table? A table you couldn't even use for dining!

Meet The Sultan, from the woody craftsfolk at Geek Chic. I got an email from them this morning saying that, due to the cancellation of an order, they have a slot available for one of these tables. They only make nine every year. So, if you're interested, act quick!

I can speak for the quality of their goods, albeit on a much smaller scale. A while ago, I bought a friend one of their cute little wooden dice towers. It's a very nicely made piece of kit, and its presence at our games makes rolling those vital checks that little bit more special. They even make a "Command Stick", which looks like something a general would use in planning a final push at the Somme, but is actually for moving miniatures around a battlemat. It might be the campest gaming accessory ever.

The Sultan isn't the only gaming table they make, nor is it the only piece of 'geek furniture' in their repertoire. There's a particularly saucy-looking comics storage solution they call The Alexandria Codex. (It's unpriced on the website, and I frankly dread to think.) Given the exceptional quality of their dice tower, I've no doubt their furniture is equally swish - and let's face it, it had better be at that price.

Seriously, if I had the money and the space, it's a no brainer - The Sultan looks awesome, and daydreams of gaming around it shimmer with golden glory. But it would, without a doubt, be the single most expensive gaming accessory I could ever think of owning.

If funds and space weren't a problem, would you? Could you? What killer function or accessory would Geek Chic have to fit into the table to tip the balance for you? 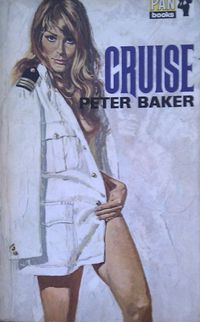 Peter Baker's Cruise (1967) is a floating morality play. Against the background of a lovely Mediterranean cruise, the audience is treated to the sexual shenanigans (and their ultimate repercussions) of the upper- and middle-class passengers.

The cover shown (right) is from the 1969 Pan printing. It is undoubtedly the best part of the book.

Cruise's omniscient narrator follows a dozen or so people - mostly first class passengers and the senior crew. The Captain is on his last voyage before retirement. A grieving Widow is looking for distractions. Her teenage son is just... looking. An elderly British lord is trying to please his trophy wife. The trophy Wife is equally engaged trying to please herself.

A few minor characters also get involved: a popular author (the matrony battleship type), a flamboyantly homosexual young man (obsessed with sailors and the theatre - groundbreaking!) and other forgettable stereotypes.

As all the characters interact and mingle in a thousand different ways of the course of Cruise, one thing becomes abundantly clear: they're all utterly reprehensible. In the few cases where they're at least "moral" (like the dim-witted widow and her naive son), they're annoying as hell. This is a ship in dire need of an iceberg. 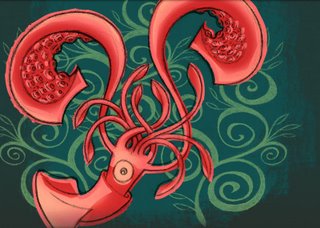 I finished Kraken last night.  There's a full review forthcoming, but for the moment let me tide you over with this:  Kraken is the most Lovecraftian novel Miéville has yet written, bursting with coiling tentacles and formless horrors from beyond the realms of human knowledge.  Good times!

"Since movies are a series of still photographs projected at high speed to create the illusion of motion, I’ve always felt that animation, and stop-motion animation in particular, represents the medium at its essence; your Ray Harryhausens and Henry Selicks not only think in terms of individual frames, they do so within a context of solid, three-dimensional objects that occupy space in the real world." -- Excerpted from Mike D'Angleo's excellent essay about "The Wrong Trousers." 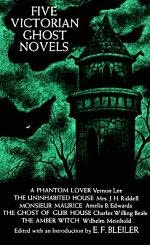 If there is one thing we may safely claim about the Victorians, it is this:  they loved a good ghost story.  Dover's Five Victorian Ghost Novels is an excellent introduction to the highs (and lows) of the genre, containing five excellent representations of the Victorian ghost story in all its glory.

Being a Dover publication, Five Victorian Ghost Novels also features an excellent introductory essay by EF Bleiler and cover art by Pornokitsch favorite Edward Gorey.  And you can read it online absolutely free, here.  Keep in mind that these ghosts are not particularly frightening, as the Victorians preferred to use the genre as a vehicle for moral lessons.

The novels in question are more correctly novelettes, being relatively brief and usually serialized (during the Christmas season, no less; the Victorians apparently also preferred to read their moralizing ghost stories over their plum puddings).

Lots of Authors at Forbidden Planet 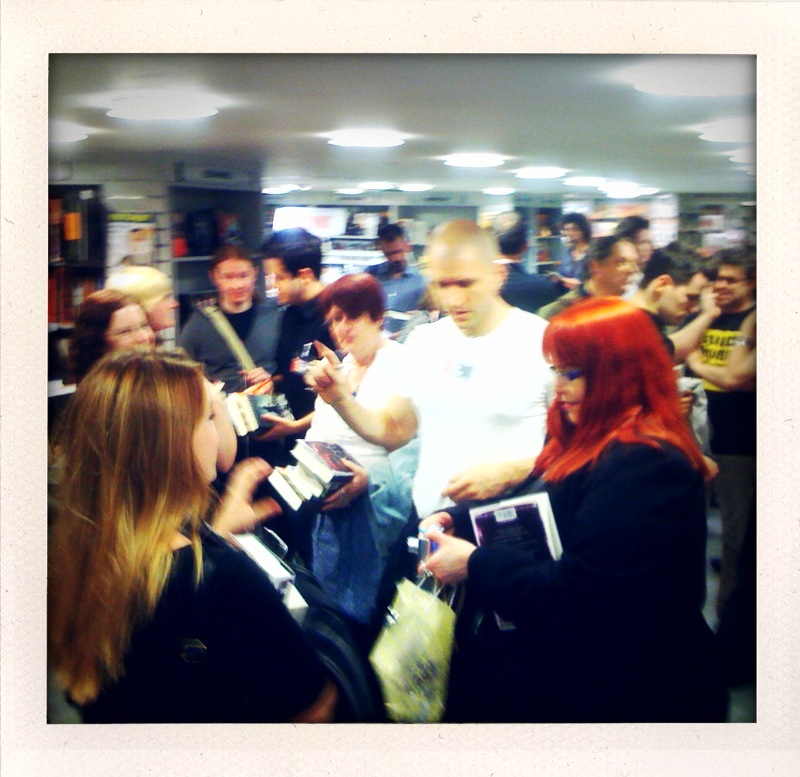 gning events, and consistently making questionable decisions about how to organize those events.

Rather than set up a queue for the authors, however, the FP powers that be instead pinned name tags to the guests of honor and set them loose to mingle with their fans.  Their many, many fans.  The intention was, presumably, to create the atmosphere of a low-key cocktail party.

The result was low-level chaos.

At right, a blurry shot of the scrum.