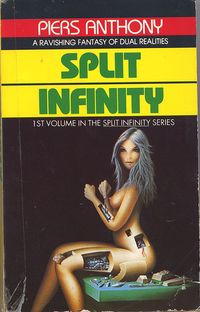 Northworld (David Drake, 1990): One of the first books we ever reviewed, Northworld is a collection of three books about a cluster of worlds, existing simultaneously and connected via dimensional "shifting". Set up as science fiction, it follows a police officer who tracks a missing ship into this cluster. Once there, he spends most of his time on a feudal plane, in which the inhabitants battle with powered suits. It is a fantasy setting - based on Icelandic mythology - just using "bolt"-firing armor rather than a simple sword. The other planes are no different: there is technology, but it generally used as a replacement for sorcery, rather than the other way around. As Drake was consciously trying to follow the mythic patterns of the Edda, this comes as no surprise. 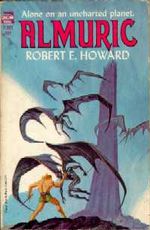 Almuric (Robert E. Howard, 1964): The creator of Conan's one excursion into science fiction didn't really take him that far off the beaten track. A burly scientist transports his consciousness across the galaxy - and finds himself in a world of magic & swordplay. The fantasy meat of the novel is surrounded by a thin, science-fiction-y framing device, that is used to set up the overarching theme of man vs. civilization. Not Howard's best work - for a man that wrote in a dozen genres, he's surprisingly clumsy when it comes to describing technology. It is clear that he empathizes with the vaguely Luddite sentiments of the novel.

Life with Lancelot (John Phillifent, 1973): Science fiction poking fun at fantasy is a sub-genre in and of itself. Someone from a high-tech world winds up on a low-tech one. He invariably makes fun of horseback riding and sanitation, falls in love with a local damsel (so feminine!) and wins a joust by secretly using technology. He doesn't believe in magic, rationalizes everything desperately, and winds up slaying a dragon. Chuckle chuckle. Har har. Life with Lancelot is one of the best of these, if only because the protagonist is an absolute moron. The adventure is told from the point of view of his shapeshifting alien sidekick, who is fully aware of his "master's" idiocy.

Razored Saddles (edited by Joe Lansdale, 1990): The previous four were all sf/f hybrids, here's another genre cross-over: science fiction/western/horror. Also known, gleefully, as "cowpunk". In this collection, the familiar tropes of the western are explored in a variety of innovative ways - post-apocalyptic rodeos, an alternative history with a Japanese Wild West, undead gunslingers and beyond. A genuinely good collection - the western contains immediately recognizable archetypes that are ripe for subversion.