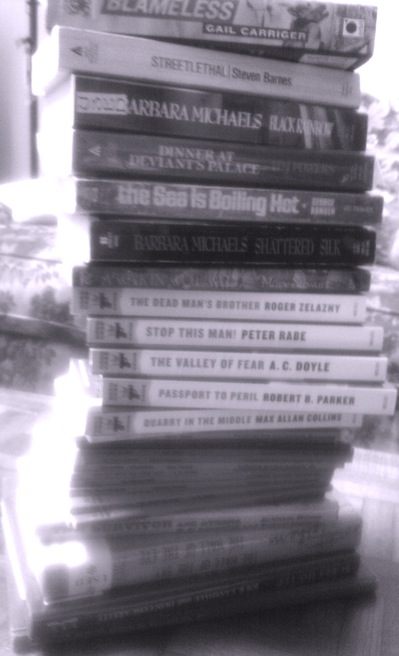 Yesterday we spent three hours in Borderlands, probably the finest genre bookshop in the world. We meticulously petted all the books and the investigative house Sphynx. The picture is a bit blurry - but underneath the stack of Hard Case Crime books is a pile of old Pulphouse publications - and underneath those is the prize of the batch - the first edition of Lovecraft & Dunsany's Survivor and Others. 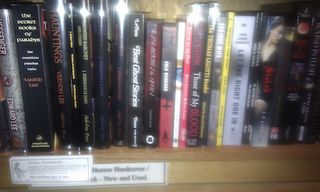 We were also really pleased to see that Rebecca Levene's Cold Warriors had made it overseas. After taking this photo & giggling (because we're that kind of weird), we discovered the last two Hermetic Division promo pins in our bag, which we left with the wonderful manager, Jude.

"San Francisco is the most depressing city in America. The come-latelys might not think so.... But she had lost it, boy. She used to give it away, and now she sells it to the tourists. She imitates herself. Her figure as thickened. The things she says now are mechanical and memorized. She overcharges for cynical services. Maybe if you are from Dayton or Amarillo or Wheeling or Scranton or Camden she can look like magic to you because you have not had a chance to see what a city can be."   -  John D. MacDonald, The Quick Red Fox (1964) 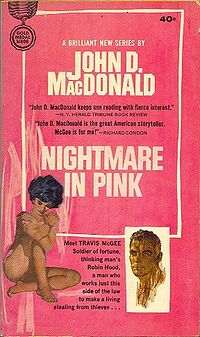 Nightmare in Pink (1964) is only Travis McGee's second adventure, but already John D. MacDonald is taking his most famous creation out of his comfort zone.

Travis is a creature of his own little world - his boat, his docks, his beloved Florida waterways. Travis lives to sip good gin, stare intently at the ocean and shtup his needy sex-slaves - someplace with lots of sunshine. Not, say, New York.

Alas, in Nightmare in Pink, poor Travis is hauled far from port. Mike, Travis' army buddy, has a little sister in trouble. "Trouble" is McGee's watchword (more specifically, "desperate woman with no other recourse", but that's more a watch-phrase). Mike would take care of Nina's situation himself, but he's broken and blind - the result of an enemy attack that took place whilst Travis was off shagging hookers on leave.

[I'm not making this up. Travis was, ahem, "wrapped in the thighs" of a geisha at the time that Mike was sustaining crippling injuries. Please keep note of this at the book's midway point, when he expounds mightily about cold-hearted whores and how he would never sink so low as to partake of one. Nice try, Trav.]

On wings of guilt & lust, Travis heads to New York to see what he can do for poor Nina.

Literature’s a democratizing force. Its power makes so much of the world accessible to anyone who can read, equally, without regard to anything about “who we are” or where we came from or any of that. If you want to participate in the world of letters, all that matters is your ability to make yourself intelligible, when you write, and to apprehend what is being said, when you read.  - Maria Bustillos, on The Phantom Tollbooth 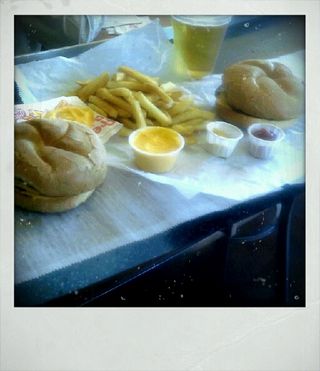 I promise I won't turn the blog into a vacation slideshow, but this photo is pretty important. Dining at the Billy Goat Tavern in O'Hare Aiport is like finding a swimming pool in hell.

The gridlock in China is probably not as much fun as this:

Who owns that sketch?

Question that surfaced in my brain soup: who owns the publication rights to a convention sketch?

Artists are essentially doing commissions for cash - but who owns the copyright? I've seen some incredible assortments of original comic book art collected by fans... so what happens if they scan them and put them on Lulu.com?

According to the Fine Art Trade Guild, there's no easy answer, and people should be clear about it up front:

I can see how that would be a tetchy issue. ("Mr. Ben Templesmith, do you mind doing a squid for me? Great! Now, how would you feel about me potentially selling it someday?")

It seems even more complicated when characters are involved. If you've got Ben Templesmith drawing - I dunno - Batman, then it seems like you've got two degrees of copyright at stake.

Anyone know the answers?

[Update: Helpful response from Tor's Irene Gallo, via Twitter: Ownership, even when commissioned, does not include reproduction rights unless explicitly contracted.]

Alas, not a real fight, but this is an interesting blurb from Subterranean Press:

We're hard at work on the signed limited edition of China Mieville's beloved Perdido Street Station. A copy of the trade paperback is out being scanned, and will be designed and proofed in roughly two months. This fall, Edward Miller plans to create an original wraparound cover as well as a pull-out illustration for our edition. Perdido will also contain the original UK cover as a frontispiece.

We've received a number of queries from customers who paid Night Shade Books for their proposed edition to see if we'll be honoring those purchases, or able to guarantee them a lettered edition if they have already purchased one through Night Shade. (We won't be able to.) Our edition is in no way affiliated with Night Shade Books. Customers should contact them for resolution if they placed an order.

Altered Carbon. The Steel Remains. Black Widow. Our bibliography of Richard Morgan has been added to the site - complete with a wide, wide range of foreign covers. As always, let us know if we got something wrong or if you've got some photos to share.