Oh, I collect him, like all the other MacDonalds, but I've always found Travis to be a reprehensible, self-indulgent schmuck. He's filled with more teen angst than a dozen field trips, and I'd be hard-pressed to find a literary character that I'd less like to meet for a pint.

MacDonald's great gift was linked to his longevity. From his first books in the 1950s to his last in the 1980s, he was always able to distill the essence of modern, mass-market culture into his plots and his pages. From TV preachers to Vegas hotelmen to teen outcasts to fly-by-night coventioneering businessmen, MacDonald could pick an exemplar of that minute's societal sub-culture and turn it into a 256 page Gold Medal paperback. He could get into their shoes, see the tragedy (and the comedy) of their lives, and make an entertaining story out of it. This is why I love his one-off books so very much - they're social histories, but they're also brilliant stories.

With Travis, MacDonald found a different voice. Over 21 books, McGee also comes into contact with every sort of society (high and low), but he's the perpetual outcast. In The Key to the Suite, MacDonald's stand-alone novel about businessmen, there's an empathy for the hustle and bustle of a salesman's life. Every member of the book's cast of characters has his flaws, but, on the whole, the reader walks away feeling more attached than not. In Nightmare in Pink, the second Travis McGee novel, McGee encounters and condemns the entirety of New York - not least of which the "locusts" of be-suited city workers. Travis, the societal outcast, gives voice to MacDonald's cruelly sarcastic dark side - taking the author's understanding of how people and cultures work, and then tearing them apart. 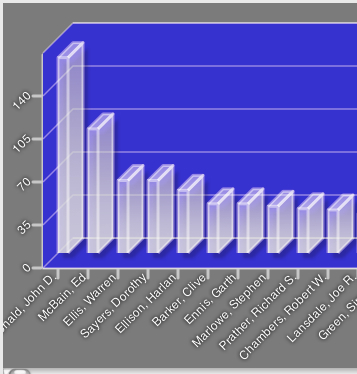 In short, I don't like Travis McGee. But, since I love John D. MacDonald, I read him anyway. Frequently, and in, this case, in order.

The Deep Blue Good-by is Travis' first adventure. The reader is quickly thrown into the action with a minimum of exposition. Travis is hanging out on his houseboat (The Busted Flush), watching a dancer friend, Chookie, practice her sweaty thing. In-between shaking her impressive money-maker, Chookie convinces Travis to help out a friend of hers: Cathy Kerr.

Cathy is stony broke (but still hot). She was used & discarded by a smiling, cruel con man, Junior Allen. Junior seems to have run off with some money that Cathy never even knew she had - sapphires smuggled by her deceased father. This handily introduces the reader into Travis' two key motivations: his unusual "salvage" operation (he'll get back the un-get-back-able, but for 50%) and his chivalric need to defend damsels in distress.

[A few unavoidable spoilers after this point, sorry.]

The book focuses more on Travis' relationships than his investigation. Upon finding Lois, Junior's former lover, she immediately collapses into his arms. Although she's got very little pertinent information, Travis spends the next quarter of the book lavishing care upon her (and, as soon as she is physically able, shagging her rotten). His actual client, Cathy, is exceptionally understanding - being that while she's broke, working her fingers off and getting physically assaulted by the actual bad guy - Travis is off on a pleasure cruise.

Pleasure and Travis are old friends. In Good-by, Travis shags an astounding three different ladies. After rejecting Chookie (because of his standards or something), he takes out his frustrations on a college student names Molly Bea, whom he skillfully wrangles out of a party, shags, and returns. Lois, mentioned above, is the classic McGee emotional slappenfuk. After witnessing her emotional collapse, he nurses her back to health. He then insults her until she cries, then proceeds to shag her. She is, of course, grateful. What she really needed in her fragile state was a bullying-rogering combination. Finally, Travis concludes the book by having sex with Cathy Kerr (a lot). Travis is in a fairly ruined emotional state at that point and makes a rather clumsy pass at Cathy. Cathy, pragmatically, says "well, I owe you, so sure, have my body". And thus, romance. 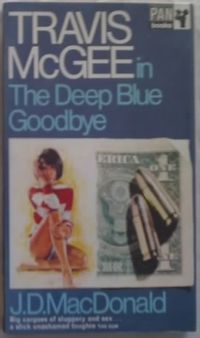 One of the structural difficulties of maintaining the series is that Travis needs to be single, lest he not have the free rein to slappenfuk lonely women in the next book. In Good-by, despite the bevy of beauties, Travis still ends the books on his own: Molly Bea is pneumatic love-meat, not even considered for a relationship; Lois is dead out of sheer dramatic necessity; Cathy splits up with him (gently, but deservedly - still, Travis manages to feel sorry for himself).

These three patterns of relationship will occur over and over again in the 21 books of the series: women too easy to merit serious romantic consideration; women saved by Travis only to die horribly; and women who "abandon" Travis to have real relationships.

Travis's irritating sexual shenanigans aside, there are some outstanding moments in this book. On the hunt for Junior, Travis tracks down Cathy's dad's old war-time companions. One is successful (if pompous) businessman - the other a slightly ostentatious real estate magnate, trapped in a crumbling house of cards. These are both great characters, and, despite the limited page-time, the men & their lives - sordid and successful - are deftly captures. Plus, Travis gets to punch one of the few characters more annoying than he is, which is satisfying.

Finally, although the first book in the series, MacDonald's skill as a writer is such that the reader gets very little world-building. The entire book is an internal monologue, so Travis can easily introduce the details of his home, his occupation & his personal history without it seeming like ham-fisted exposition.

Love him or hate him, Travis is an absorbing character, which is why I return to him time and time again. Unusually, this is one of the few occasions when I can hate the tour guide but love the tour. When it comes to the sheer craft of writing, there's a lot that modern authors could learn from MacDonald - and the ability to create an engrossing, character-driven narrative is foremost among them.