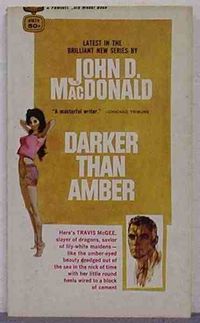 Travis is torn on whether or not to help Vandie. He's ok on money and, more importantly, he feels like scrubbing his hands cleans after being in the same room with her. The decision, however, is taken out of his hands. Travis can refuse live women, but not dead ones. When Vandie falls victim to a hit and run (more of a hit, reverse, hit, reverse, hit and run), Travis decides to get involved. 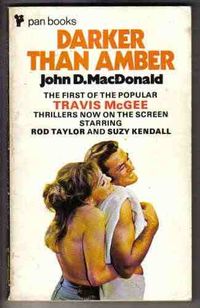 The rest of the book involves Travis uncovering - and then foiling - an elaborate and lethal con game. Vandie was one of three expensive prostitutes involved in the operation. They lured in wealthy victims, suckered them into coming on a cruise, and then (with the help of their oversized male partners) shoved them overboard. I haven't, personally, been on a cruise since the age of 8, but according to reliable sources, this still happens all the time. (Let that be a lesson to you: Beware of hookers that ask you to bring suitcases of money and check in under a false name.)

Travis and Meyer set up a elaborate con of their own. This is fast becoming one of the hallmarks of a strong book in the series. When the evil plot is unveiled and Travis resolves things by blundering around (e.g. Nightmare in Pink), the book falls flat. When the evil plot is unveiled and Travis spends time out-plotting it, the book maintains my interest until the very end. It isn't a traditional "whodunnit?" sort of mystery - the real tension comes with the "how do we get them back?".

In this case, Travis and Meyer "turn" one of the surviving prostitutes, and use her to trap the others. At the same time, they wear down the other members of the ring with strange (and very dark) mind games. It all culminates, dramatically, in a final cruise voyage.

But, enough of the story, let's get to the shameless voyeurism.

The main relationship - or lack thereof - is between Travis and Vandie. He's drawn to her (she's luverly, with legs, boobs and a pulse) (well, some of the time), but won't touch her with a ten foot pole. She's tarnished goods. She's devalued sex by turning it into an occupation. It is something she does to get things out of people, not, you know, a timeless joining of two passionate loves & a celebration of living (etc. etc.)

Of course, viewed through this lens, Travis isn't too much better.

His first lady is Virginia. Virginia has been married for three years, but things are falling apart, so she leaves her husband to join Travis on The Busted Flush. At first, she's a little shy, but through a variety of thoroughly disgusting means, Travis gets her into bed. After ten days of sexing, Virginia is ready to return to civilization. Travis couldn't be happier - he's sick of her and "alarmed at the prospect" that she may stay around. He refers the entire exercise as "missionary work" (snort). A noble self-sacrifice.

Of all the many, many relationships of Travis McGee, this one may stand out as the most upsetting. First, Virginia is married. Second, Travis' tactics are utterly repulsive - amongst other things, he gets her blind drunk and tapes her badmouthing her husband. When she sobers up, he plays it back as a form of emotional blackmail. Later, he physically exhausts her (manual labor, exercise, booze) so he can go crawling into her bed. Over her "half sleepy objection" he "shucks her out of her shorts". Third, all that and he doesn't even like her. He sees the entire thing as a sort of therapy. He is, in fact, providing meaningless sex to people so that they feel better about themselves. He shouldn't be disgusted by Vandie - he should go into business with her! (Anyway, we'll call this a type 3 - Virginia wanders off home, leaving Travis behind. Regardless of how relieved he is, she still dumped him to get on with an adult life.)

Travis also alludes to another of his enigmatic historical hook-ups later in Darker than Amber. Whilst smoking, he wistfully recalls that his pipe was the gift of a "grateful client", who had it inscribed with the numbers 724. "The twenty-fourth night of a memorable July, a little code which, if her husband Sir Thomas could interpret it, would bring him in search of McGee, complete with horse whip...". Giving Travis the benefit of the doubt, we have no idea if the client was already married at the time. But given his track record so far in Amber, who knows?

Travis' third relationship in Darker than Amber is also a historical remembrance. His client, Arabelle, is a wealthy heiress in need of a bodyguard. They're holed up together for six days in a mirrored hotel suite in Vegas. They get to doing what comes naturally (to Travis), but by the end of six days, they're pretty sick of one another. By the end of their enforced captivity, she shakes his hand, gives him an empty smile and heads back to the real world. (Type 3).

Travis' final relationship is with Merrimay. Interestingly enough, they're just setting out together as the book ends - meaning than none of Travis' four paramours actually take place during Darker than Amber. Merrimay is a dancer, hired by Travis and Meyer to mimic the (deceased) Vandie as part of the plan to terrify her murderers. She does a good job - so good that her agent declares her an actress and rewards her by sending her off on a different career path. Merrimay is delighted but, as we learn in the final pages of Amber, she bombs at the audition. Tearful and distraught, she calls McGee asking if he can cheer her up. Whistling to himself, he put steaks on the grill and fresh sheets on the bed...

Not only is this creepy because Travis is blatantly and merrily capitalizing on Merrimay's misfortune, but Merrimay is Vandie. Not the real one (she's still dead), but the talented lookalike. If the real Vandie wasn't good enough for Travis, an actress than can do a flawless imitation is perfect. All the looks and none of the mileage - how handy is that?

Darker than Amber does, on the whole, balance out pretty positively. As fun as it is to climb them, the disconcerting sexual relationships are mere molehills in this case - mainly tangential references to Travis' past. And, as if to compensate for the lack of active sexual hijinks, the book's story is strong. Meyer and Travis work hard to piece together a complicated mystery and then, impressively, come up with a dramatic way of hooking the bad guys. The lack of a (living) client builds up the vigilante element - making this one of the series' darker entries as well. Travis and Meyer are fighting fire with fire. Trying to figure out when or if they'll draw the line is part of the tension.