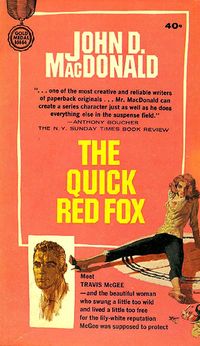 The Quick Red Fox (1964) is the fourth Travis McGee novel. This time, John D. MacDonald sends his scallywag creation on a cross-country scavenger hunt, chasing down suspects in a nasty case of blackmail.

As a mystery, Fox doesn't have quite the twists and turns as its immediate predecessor (A Purple Place for Dying), but the format gives the book an inherently suspenseful narrative structure.Travis essentially working his way down a list.

As the suspects are discarded (either proven innocent or killed), the tension builds. Sooner or later, the list will end & the fisticuffs begin.

The Quick Red Fox is really notable for two reasons.

The second, Travis manages to behave like a reasonable, empathic, un-reprehensible human being for the entirety of the book.

Lysa Dean is an A-list super-celebrity. Travis compares her to Elizabeth Taylor - string of marriages, a superstar, a walking magazine cover. Not just the creation of Hollywood magic, but a legitimate, walking, talking, smoldering icon of sensual femininity. She calls on Travis because she's in over her head: a long weekend of mistaken lust has suddenly come back to haunt her in the form of blackmail and photographs. Travis needs to hunt down the villain before the tabloids get word of the situation.

For Travis, it is hate at first sight. Lysa is spoilt, pretentious and fake. She's got a line for every occasion and knows how to work the room. She's perfectly aware of her talent for duplicity, but knows how to use it to get ahead. She's a skilled manipulator of people and not afraid to use her physical charms on the opposite sex. Essentially, she's a bite-sized, female Travis. No wonder he hates her.

Travis lives the All-American secret man-dream, and, improbably, rejects Lysa. He understands intuitively that "winning" with this feminine powerhouse isn't a matter of going to bed with her - it is a matter of refusing her entirely. In fiction and film alike, there's nothing that supposedly champions manhood like turning down the un-turndownable. (In a way, I was relieved that Travis didn't shag her - had she rolled over, dewy-eyed and said something like "no man has ever had that affect on me before", I would've retched).

It is no wonder Lysa returns (17 years later - like Dirty Den) - as the female Travis, it feels like he's only won one round of what could be a long, long bout.

On the second notable point, Travis goes through the entire adventure without being an ass. Oh, sure, he still tortures a ski instructor, tries to bully a lesbian out of homosexuality, slanders San Francisco, slaps his client and generally behaves like a jackass - but no more so than a conventional, embittered PI.

Travis (as seen in Nightmare in Pink) has his creator's ability to reach into the heart of the matter, and then to poison it. But, for some merry reason, in The Quick Red Fox, Travis holds off on the killing blows. He's still quick to judge others, but he's also got a tight rein on himself. When he does misbehave (for example, after torturing a ski instructor), he feels genuinely awful about it. And, in a few instances when he could be cruel, he chooses not to. Maybe he has a fever?

Travis has two relationships in the book. The first is in the past - a fling with a local children's book illustrator, charmingly named Skeeter. Things apparently started well, but fell apart when they both discovered a knack for "chipping away at the weak points" (i.e. what Travis does for a living...). They called a truce and went for friendship instead. This is, so far in the series, completely unique. Skeeter isn't dead (type 2), nor has she "cruelly" dumped Travis to further her own "selfish" needs (type 3). She's no gum-snapping party girl, there for physical pleasure (type 1). Which means, of all things, this may actually be the first recorded evidence of Travis being an adult, mature human being (at least, as regards to the concluding of relationships). (Personally, I've got a soft spot for Skeeter. She makes good grog, spends her days drawing a mouse named Quimby and got over Travis. More power to her.)

The second relationship is with Lysa's personal assistant, Dana Holtzer. In contrast to her boss (and to Travis), she's withdrawn, submissive, focused and brutally-honest. She's also fairly funny and very good at her job. At one point, Travis gets sulky because Dana is organizing everything for the the two of them (and better than he could). To her credit, she calls him on it - and to his, he actually apologizes. Dana's got a big bag of issues. She's got a kid in a special home and a husband in a coma. She's no prude, but having a boss that gets photographed at an orgy doesn't fill her with confidence. Plus, as a "genuine" "honest" "good" person, she's just a little exhausted with the Hollywood lifestyle.

Travis does his best not to flirt with Dana too shamelessly, and, as a result, the two of them settle into an easy working relationship that largely dominates the book. Whilst Travis and Dana roam around the country looking for blackmailers, the reader is left wondering at which airport they finally give in to their animal urges. From Dana's first appearance, it has all the predictability of a Jennifer Aniston rom-com, but, for once, it works. At no point does Travis save her, slap her or even lecture. He sulks, he jokes and he even admits to showing off. Could this be love?

Alas, poor Travis. For Dana is a type 2. Although not actually killed by the ultimate villain, she's bonked on the head with a stone rabbit and, upon waking from her coma, is a completely changed person. Pre-bonk, someone utterly in love with the McGee. Post-bonk, someone eager to avoid him entirely. (One does wonder if the entire post-bonk amnesia is a ruse, and that the savvy Dana just used it as a means of removing the moping beach-bum from her life.) Alas, poor Travis, true love is not to be found in 1964.

Two good adventures in a row - and now Travis is being well-behaved. Are my less-than-sterling memories of this series at fault? Only time will tell. Time, and A Deadly Shade of Gold.

Two notes unrelated to anything:

1) The Quick Red Fox features the first reference to McGee's friend Meyer. He's only mentioned as the "hairy, ugly, charming" fellow who introduced McGee to Skeeter, and doesn't appear in person.

2) JDM gets in a good dig at some of his contemporaries, referring to the "portentous gruntings of Uris, Wouk, Rand and others of that same witless ilk".

The Quick Red Fox (1964) is the fourth Travis McGee novel. This time, John D. MacDonald sends his scallywag creation on a cross-country scavenger hunt, chasing down suspects in a nasty case of blackmail.

As a mystery, Fox doesn't have quite the twists and turns as its immediate predecessor (A Purple Place for Dying), but the format gives the book an inherently suspenseful narrative structure.Travis essentially working his way down a list.

As the suspects are discarded (either proven innocent or killed), the tension builds. Sooner or later, the list will end & the fisticuffs begin.

The Quick Red Fox is really notable for two reasons.

The second, Travis manages to behave like a reasonable, empathic, un-reprehensible human being for the entirety of the book.