Oh, you already know this one.  But, briefly:  Willow Ufgood is a little person in a happy community of little people.  His children find a human baby and Willow's village elders talk him into taking the baby back to the humans.  The baby is a princess whose birth represents the beginning of the end of the local tyrant queen's reign of terror, so she sends her legion of guards and only daughter off to sieze the child.    Willow, meanwhile, collects a strange assortment of Epic Quest hangers-on: two tiny brownies (hilariously... French?), an elderly female wizard stuck in a variety of unfortunate animal shapes, a horny, cross-dressing swordsman, and ultimately the tyrant queen's grouchy daughter (shagged into submission by the cross-dressing swordsman, naturally).  Willow, who is a farmer but secretly wishes to be a wizard, learns to believe in himself; the swordsman and the grouchy daughter unite to become a loving foster family for the baby; the lady wizard turns back into a human and has an epic-ish old lady wizard battle with the tyrant queen; good wins and everyone goes back to being happy.  Yay!

Willow is a strange movie - better by far than our previous Monsters & Mullets features, but not 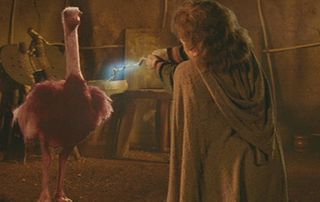 actually very good.  On the one hand, Warwick Davis' eponymous hero is an encouragingly pleasant chap (at least, when he's not nagging the other characters), and not especially stupid.  His spiritual journey isn't the most ground-breaking kind of character development out there - but at least he actually learns and changes.  Our other M&M films have not suffered themselves to worry overmuch about such meaningless fripperies as "likeable heroes" and "character development."  On the other hand, Willow is such a drag.  He barely opens his mouth but to scold, whether it be his own friends or the bad guys.

Frankly, though, the real reason Willow doesn't sink under its own weight is Val Kilmer's nuclear turn as Mad Martigan, the self-obsessed mercenary swordsman even more reluctant to take up

the hero's mantle than Willow himself.  Kilmer radiates charisma like Chernobyl on a sunny day and the screen positively glows whenever he staggers across it.  I'm not just saying that because I think Val Kilmer is hot (this is a truth, truly spoken).  The film does its level best to make Mad Martigan look like an absolute buffoon:  he spends half the film in an increasingly ragged pink dress, which he ultimately ditches in favor of some bizarre black and gold samurai armor (complete with silly tassel).  And that's not even taking into considering his horrific waist-length extensions.  And yet.  Every scene Kilmer is not in is twice as long and a quarter as interesting as any he is in.  That's math, so you know it's true.

Like our other M&M features, Willow has its fair share of doesn't anyone think this shit through?  Superficially gender progressive, Willow is actually all about puttin' the wimmins back in their place.  All the nominally powerful characters are female:  the tyrant queen; her grouchy daughter 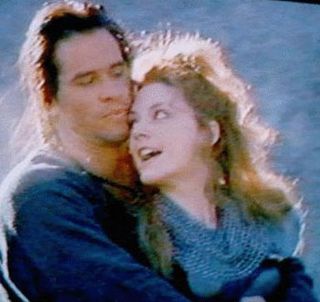 (who is the tyrant queen's most trusted soldier); the lady wizard; the reign-ending magical baby.  Except for the fact that a) all the main characters are men, b) all the effective characters are men, c) the grouchy daughter changes sides when Mad Martigen gets smacked with a love potion and falls for her (apparently all she really wanted was someone to plague her with shitty poetry - as a lady-person myself, lemme tell you that that is, indeed, all women really want.)  The movie ends with heteronormaity restored:  the evil queen is dead, sucked into some infernal abyss, and Mad Martigan with his lady-love (now wearing man-appropriate trousers and a lady-appropriate dress respectively) adopt the magical baby and rule in goodness and light till the end of time, or she turns 15 - whichever.

Willow is, among other things, a Geroge Lucas film.  While watching the movie my companions 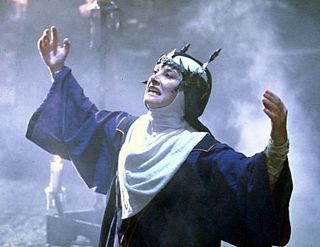 and I debated at great and slightly inebriated length as to whether Lucas cribbed more from Star  Wars or Lord of the Rings.  I suspect that my opinion is clear, but there's an argument to be made in favor of the Star Wars theory and I encourage you to get down and dirty in the comments.  We could, of course, just split the difference... but what fun is that?

We also debated about the grouchy daughter's hotness; my male companions were enthusiastically in favor of her, while I was lukewarm.  Thoughts?

Willow's not great.  But it's not terrible, either!  And that, my friends, is no bad thing.

Hookers, Victims & Doormats:  A couple of low-level doormats.  And a magical baby plot-device!  (Annoyingly, often the subject of reaction shots.)

Appalling Gender Politics:  Present and accounted for!  (NB - from now on I'm going to give this its own catch-all category:  Doesn't Anyone Think This Shit Through.)

Comprehensive Monsters & Mullets Awesomeness Spectrum Placement:  Our highest placement yet!  Much closer to "awesome" than "zero." 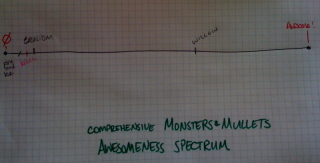