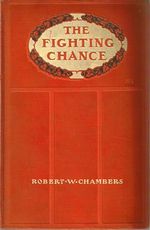 Siward begins the book in a state of social distress. It seems that - not long ago - he committed the Ultimate Sin - he brought a woman into his posh gentlemen's club. Not any woman, an actress. The circumstances are all a little dodgy, but when it came down to it, poor Siward was stumbling drunk, and couldn't defend himself. He has - with good cause - been evicted from the club and been shunned from polite society. As the book continues, we learn that this isn't his first alcohol-related incident - although his drunkenness has been previously ignored as it wasn't paired with any sort of disastrous incident (e.g. murder / rape / bringing-a-woman-into-a-club). Nor is Stephen the first Siward to have this "curse" upon him - he comes from a long line of booze-plagued types. It is almost fortunate that he's the last of his line. Sure, it'll be a shame that this heralded New York family comes to an end, but at least he won't be passing his curse down to another generation.

Mr. Chambers' assumptions about the genetics of alcholism have been proven over the past hundred years (although generally most doctors don't suggest "ostracism" as the recommended treatment). But Siward isn't the only one with a hereditary problem - Sylvia Landis has inherited infidelity. Not just Sylvia's mother, but her grandmother too - both... cavorted. With men! Sometimes in Europe! Fortunately, Sylvia is also protected by the thick, rubbery shield of moneyed society (it also helps that she's hot). Sylvia's self-medication for her disease is an interesting one: she's gotten herself engaged. She's convinced that the best way to battle her latent instinct to shag is to get herself off the market as swiftly as possible.

Syvlia's chosen partner is Quarrier. He's ostensibly handsome (although Sylvia can't stand his horrible "silky" beard), undeniably rich and truly awful. He's a bloodless, joyless beast who does everything by the numbers, plays nasty bridge and is generally a cold-blooded, serpentine fellow. He's theoretically devoted to Sylvia, but it is clear that she's merely a trophy to him. He's also devoted to Siward - but in a much different way. Siward's actress "friend" is really Quarrier's actress friend. Quarrier knows that Siward is innocent, but refuses to help him, as it might cast a stain on his own reputation. More than that, Quarrier is set on destroying Siward - an impulse that's doubled and re-doubled every time he catches Siward making eyes at his fiancée.

One of the key distinctions betwen The Fighting Chance and The Firing Line is the difference between Quarrier and Malcourt. If the latter was a tragic figure (and the source of the book's finer quotes), the former is utterly irredeemable. There's even a long debate between Siward and his friend Plank towards the end of the book, as the two try and discern if Quarrier has a single worthwhile characteristic (they determine that he has two: he's charitable to his family and especially kind to his detestable father). But even that is overshadowed by Quarrier's hideous sort of sensuality. Unlike Malcourt, who killed himself rather than (ahem) "press his advantage" over a wife that he knew didn't love him, Quarrier is quite keen to get into bed with Sylvia (much to her horror) and tells her as much. As well as his dodgy bit of actress on the side, Quarrier is also slinking around after another society dame as well - an equally bloodless woman named Agatha. 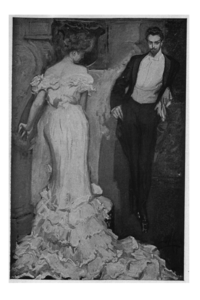 The book is split into two halves. The first is an extended hunting party. The characters are all introduced and, in traditionally Chambersian fashion, defined by their treatment of animals, the outdoors and sports. The wholesome types - including Siward and Sylvia - love a bit of a fresh air romp and a frolic with the dogs. The unwholesome types - Quarrier and his mercenary crony, Mortimer - shoot mechanically (or not at all) and spend most of their time gambling and leering. It is no surprise that, by the end of this introductory section, Sylvia and Siward are sneaking around and snogging by moonlight. They're the only two having any fun.

The second half is a much longer period of time, and is set back in New York City. Despite the feverish midnight snoggery, Sylvia is determined to prove herself fidelitous (?) and keeps planning her wedding with Quarrier. Siward renews his relationship as well... with the bottle! He's a dead man - both "physically and socially". Quarrier is the only one having a good time - he's making Sylvia miserable, he's got two ladies on the side and he gets to mix business and pleasure by crushing Siward financially. Not that Siward notices - he's holed up in his family home getting drunk and repeatedly breaking his ankles. 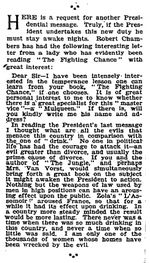 The recurring theme - unsurprisingly - is the idea of "the fighting chance". The book has three major battles: Siward vs Booze, Sylvia vs Lust and Plank vs Ambition. In each of them, the hero starts the bout as the underdog, but they've been given a "fighting chance". And, as Siward says, "Men who are worth a fighting chance ask for it sometimes—but take it always."

Siward is repeatedly ground down (and broken) by his alcoholism, but finds the spark he needs in Sylvia to conquer his base urges. Interestingly enough, she's not even there to help, Siward confesses to just needing the idea of her as the inspiration he requires. Sylvia's situation is similar. It takes her a few hundred pages to realize it, but it finally dawns that love is the answer to infidelity. It is better for her to break a poor engagement for a good marriage than to commit to a poor marriage out of a sense of virtuous self-deprivation. And, on the undercard, Plank has to stop crawling up the social ladder before he can make any great leaps. Once he stops grovelling for points, he proves himself a "man" and is justly rewarded. His ultimate moment is the dressing-down of Quarrier - Plank knows he's committing social suicide, but he's committed to doing the right thing. And, happily, it all works out for everyone.

The Firing Line was certainly more melodramatic, but also had the advantage of the quick-witted Malcourt. The Fighting Chance, by comparison, has fewer enjoyable characters and set-piece scenes (although there's an exceedingly risque bit of underwater snoggery!) - this book comes across more as a parable than soap opera. Where The Fighting Chance takes the lead is with Sylvia's motivation. Sheila holds up the romance because of her strange aversion to getting a divorce - it makes sense, but also grounds The Firing Line as a period romance (and when her bizarre hissy fit eventually results in Malcourt's death, she becomes unforgivable). Sylvia's belief in the heredity of infidelity is unscientific, but weirdly believable. She's from a fucked-up home where her mom cheated on her dad (and her grandmother cheated on her granddad). Sylvia's behaviour isn't prompted by genetics - it is prompted by a pretty understandable psychological wish to break the chain.

Mr. Chambers' talent is in keeping The Fighting Chance focused on the characters. This is especially clear in the second half of the book. Plank and Quarrier are engaged in a financial war that shakes the city, but Mr. Chambers resists the urge to shower the reader in detail. The reader knows it is important to them (and, charmingly, he also reveals how dull it is to the "man on the street"), but we only see the nameless conflict in how it impacts the characters. Detail is neither provided nor necessary. It is a stylistic decision, but one that many genre authors could do well to follow.

The Fighting Chance was so popular at booksellers that it required an additional printing prior to publication. According to one article, it sold over 200,000 copies - at the time, Mr. Chambers was a regular bestseller in both the US and UK, topped only by Mr. Churchill. The book was even banned for being "a little too warm" in one Massachusetts district and, according to one critic, was better than Edith Wharton - for, although it discussed many similar themes, The Fighting Chance "adds charity to Mrs. Wharton's ingredients". Time has been cruel and, now, this is a book with a paltry 45 downloads on Project Gutenberg.

Sadly, I'm forced to concur with the modern view of book's legacy. While The Fighting Chance is not an embarrassment, it is also not very entertaining. Mr. Chambers has written a good - not excellent - character study, and aside from being a generic example of his craft, I don't have much else with which to recommend it. Like a true man, this book took the chance I gave it, but, sadly, that doesn't mean it won out in the end.

[Editor's note: The Fighting Chance is available as a free ebook from Project Gutenberg (your chance to be download 46!). The Repairer of Reputations is our protracted attempt to redeem the forgotten & derided works of Robert W. Chambers.]