'If they want to have huge debates about it, that’s fine.' - China Miéville and Bas-Lag

At SFX2, China Miéville was busy from start to finish, but still managed to carve out a bit of his time (over lunch, between panels) to field questions. The topic was specifically Bas-Lag, as the interview was to accompany a piece for The Literary Platform about "lost properties": worlds that had been inactive for some time.

Pornokitsch: Bas-Lag isn’t officially “unsupported”, as much as “no one knows when or if the next one is coming out”. Unless you wanted to tell us right now…

Continue reading "'If they want to have huge debates about it, that’s fine.' - China Miéville and Bas-Lag" »

In the first half of our interview with Sam Sykes, we discussed his debut novel, Tome of the Undergates and its upcoming sequel, Black Halo. In the second half, things get even livelier.

Recently, you decried the over-use of the word “genre”, and its corresponding implication that sf/f authors are working towards some category standard rather than just writing the best book that they can. What about readers? What do you think readers have come to expect from a fantasy book? 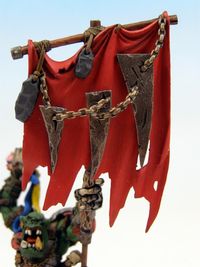 I can't speak for readers, of course, not even a significant majority of them.  Because I don't think we're at the point where we can lump readers together as we used to.  Saying shit like "oh, girls won't read epic fantasy" and "oh, boys don't want romance in their books" is pretty ridiculous.  At DragonCon, a rather dignified older woman listened to me discuss the complex relationships, only to have her nod and say: "Uh huh.  So, I'm looking for a lot of blood and guts.  You got that, kid?"  I've seen a lot of guys gush over the relationships, a lot of girls do the same.

Which, I think, is pretty indicative that the whole idea of the "genre standard" is pretty much over with, or at least not nearly as important as writing a good book is.  People don't become attached to the tropes and the magic systems and the worldbuilding (they admire them, certainly, and there's nothing at all wrong with that), they become invested in the stories and the characters and the people.  Even when someone goes berserk over the complex societies and crafting of civilizations, they admire (in my opinion) the character of that society, rather than its silk-driven economics or whatever.

The Kitschies: Tentacles on Parade (2009 Edition!)

Our 2009 Tentacle has adventurously wriggled back in time to grasp the winner of our inaugural Kitschie. Plus, some exclusive behind-the-scenes photos of the trophy-making process. 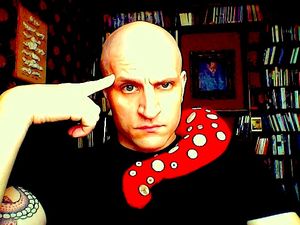 China Miéville with the 2009 Red Tentacle for The City & The City (plus, matching tattoo!).

Posted by Pornokitsch in The Kitschies | Permalink | Comments (2) 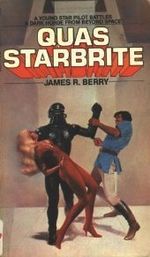 We picked up a copy of Quas Starbrite (1981) as an act of ironic glee. Based on its cover (shocking) and its strapline, "A young star pilot battles a dark horde from beyond space", Anne figured this would be exactly the sort of book that we'd each read six pages of and then make a meal out of tormenting. Where exactly is "beyond space" anyway?

Against all odds, Quas Starbrite is actually pretty good.

The titular Starbrite is a cleft-chinned young space commander with a lousy desk job as aide-de-camp to the Commander of the Spaceforce of the Galactic Federation. He likes the cushy office, but he was a top cadet, dernit, and he wants to be out in the field, blasting through space and discovering new worlds. His opportunity arrives - kind of - when he's assigned as a military aide to a scientific research mission to the Nether Quadrant. Apparently there's been some sort of grumpy dissatisfaction with the colonists there, so he'll be tagging along to carry the bags of an intrigued sociologist.

Mr. Sykes' debut novel, Tome of the Undergates, was one of last year's hottest and most intriguing releases. In just a few weeks, he follows it up with the greatly-anticipated Black Halo.

Thanks to the power of the internet, we're able to get interviews from authors in far-off, overseas lands. In Sam Sykes' case, it also took a taser and a court order.

Let's start with a question that seems oft-pondered and never-asked, do you play Dungeons & Dragons? The relationship between the Tome of the Undergates' adventurers and a traditional D&D party has been flagged up by a few reviewers. 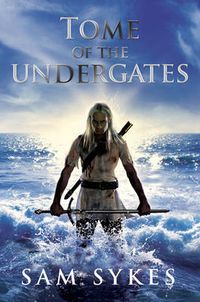 Yeah, I played D&D.  Not as much as some people might accuse me of, perhaps; I never really had enough patience for it.  I would get bored and aggressive after awhile, which, playing with three other dudes about sixteen, would inevitably lead to terrible things.  There's no way to say this without being at least a little embarrassed, but a lot of my formative years as a writer were dominated by Dragonlance and Forgotten Realms, which were taken from D&D pretty directly. I say a little embarrassed, because it's not quite as lofty as others who might talk through their nose about how they are a true child of Tolkien and adhere strictly to the rules of true myth and the hymns of Robert E. Howard, but fuck that.  I loved those books. Dual wielding dark elves with magic panthers 4 lyfe.

The truth is that I wrote Tome of the Undergates back when I was fourteen and finished it when I was around seventeen. At that iteration, it pretty much blew. I had written a pretty competent Forgotten Realms-esque story, but I hadn't written my story. That's when I started branching out, reading more, having that defining moment where every kid's perception of reality is shattered by George R.R. Martin.  I kept a lot of the original foundations from when I was fourteen for the original story (sometimes, I think, maybe too much), but no, it's not a D&D adventure.

I mean, fuck, how could it be? Four melee classes? A party of completely conflicting alignments?  A cleric that chose healing and good as her domains?  Who the hell would run with those nerds?  I don't think Denaos evenknows what Combat Reflexes is, let alone how to use it.

The Repairer of Reputations: The Tracer of Lost Persons by Robert Chambers

A brief history of The Tracer of Lost Persons:

1906: Robert Chambers publishes his book, The Tracer of Lost Persons. It is a collection of short stories about young men searching for their true loves. Their quests are aided by an omniscient detective, the talented Mr. Keen, a middle-aged paternal figure with gray hair and the "air of a gentleman". 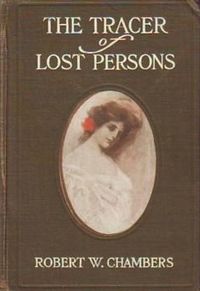 Continue reading "The Repairer of Reputations: The Tracer of Lost Persons by Robert Chambers" »

Underground Reading: A Party to Murder by Lionel White

A Party to Murder 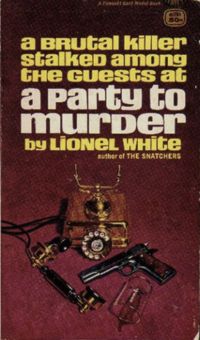 (1966) is a disposable little mystery by Lionel White and published by Gold Medal.

Following a predictably debauched Christmas party in the publishing industry, a woman heads back to a hotel room alone. She is then horribly murdered. Suspects abound - the beautiful Patricia Andrews was married to one senior executive, had shagged another, was currently involved with yet another and, finally, was being stalked by a fourth man, who hadn't a prayer of getting into her knickers. Publishing, eh?

The story is told in the alternating-person view, flipping from chapter to chapter. Virtually every narrator has a guilty conscience. If they're not bemoaning their untimely involvement with the deceased, they're embezzling money or sleeping around or just generally being a bit dodgy.

Even the police lieutenant whose viewpoint opens and closes the book is acting suspiciously. His best friend, another officer, was hit by a car right outside the same Christmas party. The good lieutenant hasn't slept in days and is far more concerned about his fallen mate than he is about finding the killer of "a real slut".

More words in fewer places. If you're up for some loooong reviews, this was the week for you.

Continue reading "The Week that Was" »

Back in the dawn of time, before Pornokitsch, Anne & I used to run a blog called The Carnivore Project. It was based on the supposition that the British were in desperate need of American advice on how to consume vast quantities of creature. Twas a good time.

One of the highlights of the experience was a bourbon tasting with Chris Morris, the Master Distiller for Woodford Reserve. This particular post first appeared in September 2006. 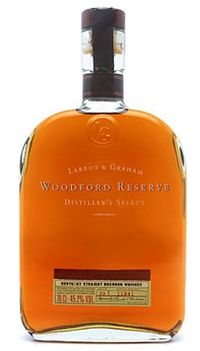 As if to encourage (unnecessarily) appreciation of a cold drink, it was the hottest day of the year. By the time Anne and I poured ourselves out of the tube, we were damp, disgusting and absolutely dying for a tall, cool drink.

Fortunately, Chris Morris, Man of Bourbon, was there to tell us exactly what we needed. Chris is a passionate speaker - and he really likes his bourbon. His bias towards Woodford Reserve was on display, but he very rarely sounded like a sales pitch. He was keen to point out the virtues of all the tipples to hand and clearly saw himself as an ambassador of the drink, rather than just one brand.

The main interest of the the crowd - predominantly British food journalists - was the difference between bourbon and whiskey.

Fortunately, Mr. Morris was equally keen to expound in the paricular area. The first point he made was that all types of whiskeys - and by that he meant bourbon, Scotch and Irish - share a few points of commonality. They’re made from grain, they’re distilled below 190 proof, they age in oak containers and they’re generally bottled at 40% or higher ABV (alcohol by volume).

However, bourbon then differentiates itself from "Scotch" and "Irish" whiskeys in several ways: