Gloom is a straightforward, delightfully morbid card game. Published by Atlas Games in 2004, it picked up an Origins Award in 2005 for "Best Traditional Card Game".

And, despite the stylistic trappings, Gloom is a very traditional game - and that's part of its appeal. It has an easily-mastered mechanic that makes it quick to learn. When this is coupled with the entertaining, shamelessly Gorey-styled artwork, Gloom is the sort of game that you can bring on vacation to play with your geekery-averse older sister.

Each player has a family of five vaguely horrific people - from a brain in a box to a serial-killer clown. The actual family selection makes no difference, like many of the other features of the game, it is just dressing. The goal is to make your five characters as miserable as possible and then kill them. You do this by playing Events on them. There are bad events ("Mocked by Midgets") that give them a negative Self-Worth and good events ("Wondrously Well Wed") that give them positive Self-Worth scores.

Generally speaking, you save all the bad stuff for your people and play the good stuff on your opponents. When your character is delightfully miserable, you kill him/him/it with a special Untimely Death card. A dead character is banked points. As soon as one one player kills off all five of their characters, the game ends and everyone tallies the points of their dead folk. The most miserable family wins. 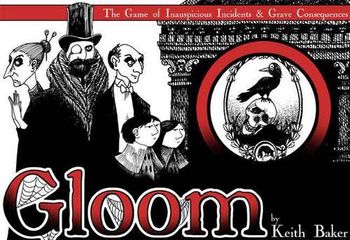 My favorite part of Gloom is the construction of the cards. They're all made out of a thin, transparent plastic. As you play Events, you stack them, one on top of the other, covering up each card with the next one in play. Self-Worth points are gathered in three different locations on the card, giving you the opportunity to rack up quite a hefty number.

Strategically, Gloom is fun even when played at face value - a rush to make your folk sad, your opponents' folk happy and then kill your people off. But Gloom also makes more complex play possible with two further elements in its mechanic: the turn structure and the additional text on each Event.

Each person's turn is composed of two stages. You can only kill someone off (an "Untimely Death") during the first stage. This keeps you from making one of your Characters extremely miserable and then murdering them immediately - your opponents will always get a chance to react before you can capitalize on any huge numbers. There are a few cards that subvert this order by allowing you to kill off multiple Characters in a turn, or to en-miserate and kill in the same go. These are some of the most useful in the game,

Secondly, almost every Event card comes with some additional variable. As a rule, the cards that do the most for a character do the least for a player. A card that really lowers a Character's Self Worth (say, one that puts a stonking -15 in all three places, for a -45 total!) may require you to skip your next turn. Or even a card of medium value (a -20) will decrease the amount of cards you can hold in your hand.

Conversely, a card that raises a Character's Self Worth also comes with a bonus - allowing players to draw extra cards, for example. If you play that card aggressively ("Ha! Your Character is now happy!"), your opponent gets the bonus. As a result, there are many situations - especially early in the game - where you'll want to make your own Characters quite happy and possibly even do "bad" things to your opponents'.

Since 2005, Atlas have released a number of expansions to Gloom, all layering on further complexity. We've tried two - Unhappy Homes and Unwelcome Guests. They do add more to the game, but, generally speaking, I prefer the original, unadulterated box. The mechanic is simple enough that it encourages strategic thinking and allows for different styles of play both in terms of building your own Characters and tearing down your opponents'. 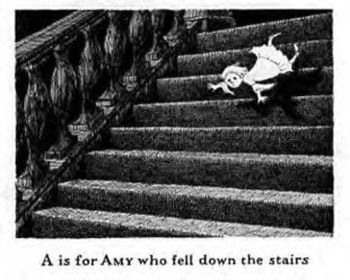 The master at work.

Gloom, as mentioned above, also owes a huge debt to Edward Gorey. The art, the text and the characters are all clearly inspired by the legendary horror fantastist. For us, that only increased the joy of Gloom. The rules encourage that each player read their cards aloud when played, something we still do with macabre enthusiasm.

The plastic structure is something that should also be commended. I suppose particularly savvy players can "read" opponents' hands - at least down to the type of card they may have, but there's a sheer novelty value in the stacking "overlay" cards.

Gloom is a game that's ideal for both expert gamers and novices. Those seeking an added challenge will find one in the expansions, but the straightforward nature of the core game provides more than enough replay value. If you're up for a gory, Gorey evening, Gloom's an excellent find.

(It looks like a Cthulhu Gloom variant will be coming out in August. Gorey-styled Lovecraftian beasties? I'm tempted for the artwork alone.)

Gloom is a straightforward, delightfully morbid card game. Published by Atlas Games in 2004, it picked up an Origins Award in 2005 for "Best Traditional Card Game".

And, despite the stylistic trappings, Gloom is a very traditional game - and that's part of its appeal. It has an easily-mastered mechanic that makes it quick to learn. When this is coupled with the entertaining, shamelessly Gorey-styled artwork, Gloom is the sort of game that you can bring on vacation to play with your geekery-averse older sister.