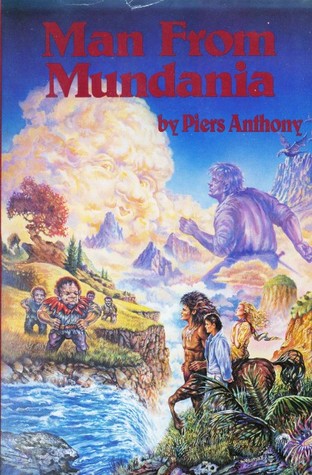 [This is the second half of our review of Piers Anthony's 1989 popcorn fantasy fluff Man from Mundania. In unintentional homage to the book, this review is overlong - though hopefully not similarly underwhelming. The first half is here.]

Man from Mundania is the twelfth novel in the Xanth series, and thus one of the early third-epoch books. Its plot is breezily episodic, most of the charater development occurs off-stage, and it's filled to bursting with self-satisfied metanarrative commentary about things like computer science, evil artificial intelligence, and how awful life in a non-magical land is.

There's also an unsatisfying love-story, a boatload of lazy puns, and uncomfortable sexual politics out the wazoo.  Are you ready to rumble?

The story opens by introducing the reader to utterly undistinguished college freshman Grey Murphy.   He's boring, bored, failing freshman English and trying to meet girls.  In desperation he sends away for a computer program that promises to improve his love life. The surprisingly talkative, suspicously advanced software starts hooking Grey up with problematic ladies:  Salmonella is a bad cook, Agenda wants to get married, Anorexia thinks she's too fat, and Euphoria likes to use drugs.  (Round one to you, reductive sexual politics.)  Finally he begs his computer for a nice, normal girl... and meets seventeen-year-old Ivy, who labors under the delusion that she's a princess in a magical fantasy land.  Well, she's nice and she's pretty, so it doesn't really matter that she's also insane.  Yay!

Grey doesn't believe her, of couse, but they start dating. Eventually Ivy talks him into returning to Xanth with her. Because he likes her a lot, he agrees to go along.  They get into Xanth via the dreamscape of the hypno-gourd, but Grey remains unconvinced that she's a princess or that they're in a magical fantasy-land, and comes up with increasingly convoluted ways of explaining things like invisible giants and pies that grow on trees.  Despite his entrenched rationality, Ivy falls in love with Grey - primarily because he likes her without reference to her status as a magical princess. Grey falls in love with Ivy because he thinks she's a nice, normal girl - even if a delusional one.  They have a few adventures, Grey finally accepts that Xanth really is magical, Ivy proposes, and they eventually make it back to Castle Roogna, where Ivy's parents the King and Queen of Xanth, are waiting.  Oops.  Guess she really is a princess. Ivy's parents explain that the two can't marry because Grey has no magic, so they set out again to figure out what to do.  One adventure on a mountain crawling with naked ladies later, (yes, really), they learn that the does, indeed, have a magical talent - because he's actually the son two emigrant Xanth natives, an evil magician and an evil sorceress, and was conceived in Xanth before his parents fled to Mundania.

The problem is, Ivy and Grey's meeting and falling in love was engineered by an evil artificial intelligence (Com-Pewter) with (unexplained) designs on the kingship of Xanth.  Pewter originally helped Grey's parents flee Xanth with the understanding that their eventual son would return and help it overthrow the Xanthian monarchy.  (Grey's weird computer dating thing at the novel's beginning was a "sending" of Pewter, to get the plot moving. Literally.) Ultimately, Grey outthinks Com-Pewter and discovers a way to remain in Xanth with the woman he loves.  Someday, he might even become Queen of Xanth (Ivy is next in line for the kingship, teehee.)  Everyone has their happy ending!

When I first read Man from Mundania twenty years ago I found the plot and the jokes about computers completely impenetrable. All Anthony's nods to coding and sending and vaporware and artificial intelligence were completely meaningless to me; the fact that the plot of Man from Mundania hinges on them made the book tough to read.  But I liked the novel anyway, because I liked the characters.

Anthony, as we've mentioned elsewhere, has one major strength as a novelist: he writes smart protagonists. Where other fantasy novels tend to rely on swordplay and bloodshed to resolve conflicts, Anthony's characters think their way through problems.  Grey uses his knowledge of fantasy novel tropes to survive in an alien fantasy world (metanarrative?  check!). Indeed, when another character suggests that Grey simply destory Com-Pewter and so release himself from its subjugation, Grey refuses. Instead, Grey overcomes Com-Pewter by binding himself to a contract that supercedes the contract which Com-Pewter made with his parents.  For all its smugness, it's a clever and fairly satisfying resolution

The thing is, Anthony writes smart male characters.  The character who suggests Grey destroy Com-Pewter rather than reason with it?  A woman.  And this, ultimately, is how sexual politics in general work in Xanth:  men are ethical, reasonable creatures - the ultimate lawful-neutral; women are agents of chaos and emotion (probably because they menstruate).  Grey is cool and thoughtful and calculating; Ivy is warm and emotional and conniving.  Change the names of Man from Mundania's main characters and you have pretty much any Xanth novel of any epoch.  What this means is that the male characters are honestly fun and interesting to read but the female characters are a complete drag.  In addition to being ookily super-sexualized.

Anthony's weird sexual politics didn't bother me as a kid because I didn't understand them, but they're an inescapable plot-element of Man from Mundania, as they are in nearly all the third-epoch Xanth novels.  Ivy's seventeen and nearly part of the "Adult Conspiracy," meaning she's about to "lose her innocence" and become a joyless, sex-having adult.  The novel's underage characters (Ivy, her twelve-year-old brother and his two fiancées, one fifteen and one seventeen) obsess about kissing and snuggling and touching and looking at each other naked, all in an effort to  figure out how to "summon the stork." This, I now recall, was weird and off-putting to me at eleven. Turns out it still is. Then I simply didn't understand the preoccupation, and found it dull; now I find it offensive and icky.

But, setting aside the horrorshow that is sex in the Xanth novels, Man from Mundania fails in another key respect.  There's absolutely no character development:  Ivy exists merely to be someone for Grey to fall in love with. In theory there's a subplot about her growing up and "losing [her] innocence" as she joins the Adult Conspiracy, but she doesn't ever change. She begins the book single and ends it betrothed - a status change masquerading as character development.*  Grey's journey, meanwhile, is no more than learning to believe in magic - and thus, himself.  Because he is magic!  Geddit?  Grey's condescending to Ivy while he doesn't believe in magic, and then he stops being condescending when he does believe in magic.  And that's pretty much it. (Grey makes a point of correcting Ivy when she's in the wrong, in Mundania, but she specifically refrains from correcting him when he's in the wrong, in Xanth.)

I've reread most of the early Xanth novels in the last five years, and so far the only a few still more or less hold up.  Spell for Chameleon is a good read, if you can stomach the horrific sexism, and is especially notable for introducing the best character in the series, the Evil Magician Trent (whom I always pictured as looking like Timothy Dalton).  Castle Roogna features a giant spider, the wonderful Zombie Master, a brilliant battle scene and some actual character development - if you can force yourself to keep reading after you meet the girl whose talent is sex appeal, which means everyone always wants to rape her, all the time.  And finally Crewel Lye, possibly the most traditional high fantasy novel of the bunch, deserves a mention.  It's a lesser novel but it includes an interesting twist on the stock hero's quest, and unusual for the (early) series in that it's mostly narrated in the first person.

* Note, however, that Anthony might actually consider that getting engaged constitutes real and meaningful character development for a woman, as per this passage from page four:

"When are you going to Find a Boy, Ivy?" Nada inquired.  "I mean, you're well into seventeen, and when your mother was that age she had already landed your father and trussed him up."

"And by the time my little brother was nine, he had already landed two fiancées," Ivy agreed.  'I confess to being retarded."

[This is the second half of our review of Piers Anthony's 1989 popcorn fantasy fluff Man from Mundania. In unintentional homage to the book, this review is overlong - though hopefully not similarly underwhelming. The first half is here.]

Man from Mundania is the twelfth novel in the Xanth series, and thus one of the early third-epoch books. Its plot is breezily episodic, most of the charater development occurs off-stage, and it's filled to bursting with self-satisfied metanarrative commentary about things like computer science, evil artificial intelligence, and how awful life in a non-magical land is.

There's also an unsatisfying love-story, a boatload of lazy puns, and uncomfortable sexual politics out the wazoo.  Are you ready to rumble?