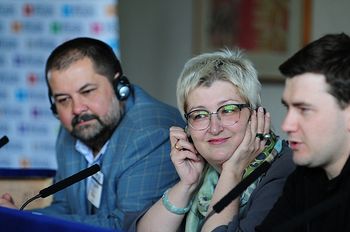 Dmitry Glukhovsky stated that he was more influenced by Latin writers than Russian ones, although many of the Russian SF writers are incredibly important - specifically Mikhail Bulgakov and the Strugatsky brothers.

Sergey Lukyanenko was more of a classicist (in Western terms) and cited both English (Dickens - The Pickwick Papers) and French (Hugo - Les Miserables) influences. As a child, he would read these and then "reload" himself back into Russia with Chekhov. He also cited the Strugatsky brothers as a genre influence, as well as Ray Bradbury and Robert Sheckley.

Tatiana Ustinova suggested that the reading experience was a universal one. "Children everywhere read the same books..." starting with fairy tales ("men and trolls"), then moving to science fiction, then girls read about love and boys about war. "This will never change."

On the role of science fiction:

(To note, the word "fantasy" was never used. This wasn't an issue with the translator - those speaking in English, like Ms. Blau and Mr. Glukhovsky also only referred to genre fiction as "science fiction".) 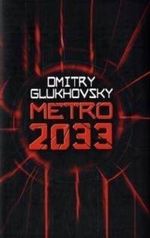 Upon being questioned about the role of genre fiction, Dmitry Glukhovsky immediately raised the stakes.  "Science fiction has been a refuge for those that wanted to raise questions that could not be raised in other spheres." He went on to explain that he saw "good science fiction as a fairytale - a comfortable way to create metaphors". Accordingly, "the less freedom we have, the more relevant science fiction will be."

The dialogue went back and forth for some time, as Mr. Lukyanenko took an opposing view. Although he acknowledged that "in itself, science fiction is an instrument to think about what could happen if things change...", Mr. Lukyanenko did not agree that writers needed a "secret language to criticize authority". He summed up his view concisely with the epigram that "when a writer does politics, he's as ridiculous as a politician writing stories".

Ms. Ustinova interpreted the question more literally and stayed aloof from the political debate. "I like detective fiction," she said, "because I can do anything. Nobody can tell me that 'it can't happen' - I can say 'it's just crime!'".

I'm afraid my notes don't actually convey the back and forth very well, but this was one of the best debates I'd ever seen on a genre panel. The two gentlemen were both very reasoned, very articulate and almost diametrically-opposed in their views of an author's "role" in the political sphere.

On using the internet and interacting with fans:

Mr. Glukhovsky's Metro 2033 had an unusual origin, which Ms. Blau explained to the audience. Upon its initial completion as a manuscript, Mr. Glukhovsky had seen the book rejected by several publishers. As a result, he put the entire text online (2002) where it received millions of views and created an open and continuous dialogue between the author and his readers. Mr. Glukhovsky received detailed advice from various specialists (he cited military, biological and engineering experts) and assistance from people in Moscow (Mr. Glukhovsky was living out of the country at the time). Perhaps most importantly, based on the community feedback, Mr. Glukhovsky dramatically changed the ending of his book and added an additional 8 chapters. He mentioned that some of the feedback from readers overlapped with what he had heard from publishers - but he hadn't taken it on board until he heard from the actual consumers.

Mr. Glukhovsky said that "the main incentive for any creative personality is to be read and to receive feedback". After being dissatisfied with the conventional publishing experience, he had taken it into his own hands. As a result, he had found a) an interactive experience, b) feedback & credibility and c) multiple millions of readers. He also pointed out that, despite the millions of free readers - and the continued presence of the text online - it had not negatively impacted his sales after the book was released traditionally in 2005. 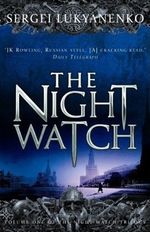 Mr. Lukyanenko had also experimented with reader interaction in the past - writing novellas with multiple endings and then letting the readers vote on which should go to print. He did, however, warn other writers not to get carried away. "It is fun to play, but important not to get lost in the game."

As with the previous discussion, Mr. Lukyanenko and Mr. Glukovsky had very different views of how an author should/could interact with fans and the two of them could have happily discussed this all day. Mr. Lukyanenko saw the author as an authority, Mr. Glukovsky saw his role more as a leader. Certainly Mr. Lukyanenko was not stand-offish with his fans (see below for personal evidence supporting this), but he steadfastly espoused that the role of creation should stay solely with the author and the interaction that Mr. Glukovsky was advocating was more of a "game". Mr. Glukovsky was certainly of a more experimental mindset (again, see below), which, based on the success of the Metro 2033 model, is completely understandable.

How it all worked:

Both Mr. Lukyanenko and Mr. Glukhovsky stayed around after the panel to chat with fans, pose for pictures and sign books. Unfortunately, I don't speak Russian so I wasn't able to say much to Mr. Lukyanenko besides "thank you!" (also, I have no idea what he wrote in my copy of Night Watch - Russian speakers, please translate!). Mr. Glukhovsky was quite chatty and spoke about the international extension of Metro 2033 - he's setting up a model where local authors detail the apocalypse in their own regions (Tube 2033?).

Structurally, the panel went very well. The moderator, the FT's Rosie Blau did a very good job going with the flow while still keeping order. The translation experience wasn't just nifty, it was also very, very good. Being that I can barely speak English, I'm blown away that someone can translate Russian/English (and vice versa) with a two second delay.

*Any errors or misquotes are undoubtedly my fault, and if someone else in attendance has any corrections or clarifications, I would appreciate them.

Panel photo from the British Council.