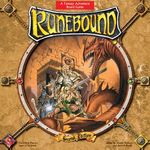 Runebound (2005) is a semi-cooperative fantasy adventure game for 2-6 people from Fantasy Flight Games. The core story is that the Dragon Lord Margath has his beady eyes on the land. The first player to successfully defeat Margath - either by thumping him or by collecting dragon runes (possessed by his nearly-as-difficult upper-echelon minions) will be a hero of the land. Everyone else will presumably be forgotten and disgraced.

The action takes place across landscape divided into hexagons of neatly delineated terrain - rivers, roads, mountains, whatnot. A few cities are also scattered across the board. The board is also littered with challenge markers - ranging from green (cakewalk), yellow, purple and red (eek!). Each marker leads to a random draw from the appropriately-coloured deck and invariably a combat of some sort.

The decks are also seeded with non-combat encounters, although the game is structured so that each turn always ends in some form of bloodshed. There are also global "events" that effect every player (for example, the rising tension leads to increased costs in the markets or packs of ghouls start roaming the roads).

Each player has a unique character and here, Runebound shows off a bizarrely European sense of humor. Rather than the core classes expected in a traditional dungeon crawl adventure, these are a stranger lot. For example, in our first session, we drew One-Fist (the hook-handed Orcish barbarian), Varikas the Dead (the skeleton knight) and Mad Carthos (the bonkers wizard) amongst others. Although there's no role-play element to Runebound, the slightly unsavoury "heroes" helped rationalize the loosely competitive style of play. This isn't the Round Table, this is a race for a valuable mercenary contract.

Each character has three different attributes, all combat related: ranged, melee and magical. They also have a few skills (largely for flavor but occasionally of use), two life meters (health and exhaustion) and one special ability. One-Fist, for example, can add exhaustion to himself and re-roll dice in combat. Quite handy.

At the start of a player's turn, he or she rolls a set of terrain dice, the results of which show how they're allowed to move their character. It is a cunning little mechanic (one that reminded me a bit of playing Titan), if slightly time-consuming. One tip: as the session wore on, we found it easier to roll the dice on the previous player's turn, as to cut out the (dull) travel-planning exercises. The character finally moves and then, if they're on a challenge marker, they trigger the appropriate challenge (again, invariably resulting in combat).

In combat, the player rolls 2d10 for each combat attribute (in the order mentioned above - ranged/melee/magic) and compares it to the corresponding number on the challenge card. In each round, all three types of combat take place, but the character can only attack once. There's a certain amount of strategy involved as the player needs to decide which attribute will "attack" (with potential to do damage if it succeed) and which two will "defend" (preventing enemy damage). Cheap hirelings can serve as meat-shields and more expensive ones can add additional attacks. Weapons add attack and damage bonuses, armor absorbs incoming attacks and magical doohickys like runes and potions add all sorts of variety into the mix.

Unlike many other games of this type, Runebound includes a levelling mechanic - indeed, it relies on it. The challenges increase exponentially and it is important that the player wisely improves his or her character at each stage. The temptation is to max out a single statistic and play to each character's existing strong suit. But, no matter how overloaded you are with magical weaponry, it becomes increasingly difficult to guarantee that an enemy will die in a single round. If you're not balanced (or very, very well-defended), you'll never get the chance for that second strike. In our session, three players all did very well. One super-sized his magic attribute and used a powerful defensive item to keep himself alive through ranged and melee combat. Another equally distributed all of her attributes and, although slower to improve, was much better suited for long combats. A final one merely hid behind waves of cheap minions and expensive magical items, refreshing the former after each battle.

Interestingly enough, there is no true "death" in Runebound - which is good, as we all spent a lot of time getting smacked about. Losing a battle merely knocks you unconscious - you lose your best item and all your gold, but you're healed and magically transported to the nearest city. If you're in bad shape, it is often worth keeping these consequences in mind, especially early in the game when you don't have much to lose. Later in the game, when characters actually have items of value, the consequences of defeat are much more crippling. A run at a tough (red) challenge may be tempting, but if you're defeated, you'll need to spend time "refueling" with the loot from lesser monsters.

Runebound is technically competitive. With a small group (I'd guess a maximum of 4), this might make more sense. Character vs character combat is both possible and fun, but is incredibly risky. The competition is more to pick up key challenges or buy the best treasure from each market. Some events also come with rewards and sidequests, which might trigger a footrace or two. The game tries to encourage competition on this level - not direct opposition, but indirect frustration. Many rewards and treasures allow you to slow down your opponents' movements, or even change the results of their movement dice. Especially in the late game, when challenges are fewer on the ground, this can be particularly annoying.

Our experience was slightly perverse as we played with a full table of six. The session ran for over four hours. If we had been aggressively competing, we never would've left the table. As it was, we not only agreed to cooperate (mostly), but we also tried out a few of the optional "game acceration" rules: making levelling easier, speeding up our turns, etc. The mechanics of the game are very quick to learn, so once we stopped gawking and started rolling, we were essentially able to cascade our turns one after the other (one person moved whilst the other fought whilst the other finished their shopping). Efficient, although far less sociable. 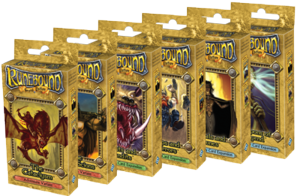 In case you get bored, there are already a few (dozen) expansions.

Playing with so many people exposed the game's primary weakness. When one person is taking their turn, there's nothing for anyone else to do. Other than, "I think I'll head in that direction and then maybe get back to a city at some point", there's very little you can plot in advance. The random nature of the movement dice and the challenge cards prohibits any sort of strategic thought. Other games circumvent this down time by relying on mechanics that keep everyone involved at every stage (Battlestar) or splitting each turn into miniature segments, so everyone is constantly moving (Arkham Horror). Runebound does not have this in place so, with any game of more than two people, there's going to be a lot of tea-drinking and card-fidgeting. One variant that's already tempted us is the idea of playing in 2-person teams. That would help solidify the semi-coop nature of the game and keep each player engaged in the events.

Runebound comes with plastic miniatures for each character, which is always a plus. The cards are clearly written and, once the mechanic clicks, they make a lot of sense. There were a few typos that we spotted, but nothing too extreme. The only problem with clarity related to the various cities. Each city has a color that links to a stack of "market" cards on the side of the board. The colors were all fairly similar and the helpful icons (a stylized monster head) weren't much different. We figured it out, but it seemed a pretty strange oversight.

Most of the card art was sort of inoffensively generic. The cards had a surprisingly cohesive narrative element (although the prose was more Terry Goodkind than Joe Abercrombie) and the art was, generally, straight out of Magic: The Gathering. The depiction of women did stand out as particularly awful, which, given the already-low standards of a fantasy board game, is remarkable. The female challenges were almost universally sex-linked - villainesses that would try to seduce allies before combat or lure men to their deaths. A swamp witch with an inappropriately-placed skull earned a few despairing glances, and the female characters ranged from the improbable to the ridiculous. This is a good game, but needs to rethink how it relates to half of its potential audience. 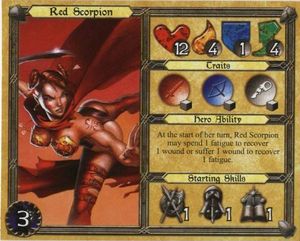 You've got to be kidding me.

Runebound is definitely something we'll try again. Our one experience wasn't perfect (mostly due to the number of players) but there's a lot of room for experimentation with the core rules now that the basics are in place. It makes sense that so many expansions have already been released: despite the infinite capacity for replay within the core set, a little additional variety can go a long way. The simple mechanics, fun narrative and semi-cooperative nature mean that Runebound should be an excellent introductory game for non-geeks. Without sounding too moralistic, the artwork and depiction of women make that impossible. I'd be embarrassed to show this off to someone that's not already resigned to genre's failings. This is a game that smoothly captures some of the best in fantasy games - shame it snags some of the worst as well.

Runebound (2005) is a semi-cooperative fantasy adventure game for 2-6 people from Fantasy Flight Games. The core story is that the Dragon Lord Margath has his beady eyes on the land. The first player to successfully defeat Margath - either by thumping him or by collecting dragon runes (possessed by his nearly-as-difficult upper-echelon minions) will be a hero of the land. Everyone else will presumably be forgotten and disgraced.

The action takes place across landscape divided into hexagons of neatly delineated terrain - rivers, roads, mountains, whatnot. A few cities are also scattered across the board. The board is also littered with challenge markers - ranging from green (cakewalk), yellow, purple and red (eek!). Each marker leads to a random draw from the appropriately-coloured deck and invariably a combat of some sort.