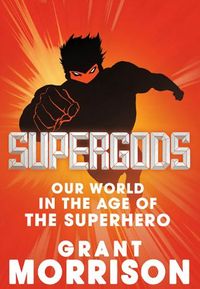 From the moment the towers were completed in 1973, they became a target for a sequence of imaginary demolitions.

King Kong was the first to climb them in Dino DeLaurentis’s pointless 1976 remake of the giant gorilla classic. They’d been smashed by tidal waves, blasted by aliens, shattered by meteor strikes, and pulverized by rogue asteroids. The terrible fall of the World Trade Center towers on September 11 had the curious inevitability of an answered prayer or the successful result of a black magic ritual.

Adding to the aura of the uncanny surrounding that day and its aftermath were the creepy clairvoyant comic books published in the weeks and months prior to September 11, all of them haunted by eerie images of planes and ruined towers.

Garth Ennis’s Punisher depicted a hijacked 747 on a suicide dive into twin silos. Adventures of Superman no. 596, a book written by Joe Casey several months earlier but published on September 12, began with a scene showing Lex Luthor’s twin LexTowers in the aftermath of an alien attack. It mirrored, almost exactly, the photographs on the front pages of the same day’s newspapers. So accurately did the pictures match that DC made the book returnable in the event of any inadvertent offense. My own New X-Men no. 115 with Frank Quitely, published in August 2001, ended with a scene in which an airliner, fashioned into the shape of a giant fist, was flown through the side of a skyscraper. The cover of the following issue, released on September 19, 2001, but written and drawn months before, had X-Men character the Beast in close-up, weeping, with an opening sequence of rescue workers searching through the dusty rubble of fallen buildings for bodies.

Who knows? In a universe where time is fundamentally simultaneous, the idea that events that have already occurred in the future might influence the past may not be entirely far-fetched.

Marvel Comics responded to the tragedy in its hometown with a genuinely heartfelt tale in which the superheroes aimlessly assembled at Ground Zero. They were compelled to acknowledge the event as if it had occurred in their own simulated universe, but they hadn’t been there to prevent it, which negated their entire raison d’être. If al-Qaeda could do to Marvel Universe New York what Doctor Doom, Magneto, and Kang the Conqueror had failed to do, surely that meant the Marvel heroes were ineffectual. September 11 was the biggest challenge yet to the relevance of superhero comics.

The disorientation of the time was captured by a single giddy moment wherein Marvel’s ultimate evil dictator cum terrorist supervillain Doctor Doom arrived on the scene at Ground Zero only to be moved to tears by the devastation. This was the “World’s Greatest Super-Villain” who had himself attacked New York on numerous occasions. Doctor Doom was exactly the sort of bastard who would have armed al-Qaeda with death rays and killer robots if he thought for one second it would piss off the hated Reed Richards and the rest of his mortal enemies in the Fantastic Four, but here he was sobbing with the best of them, as representative not of evil but of Marvel Comics’ collective shock, struck dumb and moved to hand-drawn tears by the thought that anyone could hate America and its people enough to do this.

As the events of 9/11 demonstrated, heroes were real human beings doing the right thing for the best reasons. Next to policemen, firemen, doctors, nurses, and selfless civilians, the superheroes were silly, impotent daydreams, and for a moment, they seemed to falter, aghast. They hadn’t been prepared for this and had nothing useful to offer. It was, again, the darkness before a triumphant dawn. In the ontological confusion surrounding the descent of the thirty-second path, superheroes had tried very hard to be “realistic,” and reality had bitten back. They couldn’t cope with an event so raw that it seemed to lie beyond the reach of the kind of metaphors in which they usually traded.

It would take the superheroes a few more years to sort out their priorities. They would come to realize that they were a different kind of real and best served the needs of the inner world. They would soon grow stronger and more ubiquitous, but for a moment at the end of 2001, they were knocked from the sky and left wounded.