Pornokitsch
Reviews Books Comics Film Fiction Index
Doctor Who: The Movie (1996)
The Weeks that Were

The Marrow. If John Wyndham had grown his own vegetables, he would have written Day of the Marrows. Anyone who grows courgettes will understand why. You plant them, water them, they do their thing and excitedly a courgette begins to poke its head out of the flower. Success! Then more come. They keep growing. You go away for the weekend - or turn your back for a day or two - and then OMG THEY HAVE BECOME GIANT MARROWS AND ARE ATTACKING YOUR HOUSE. They loom towards your windows when you least expect it, and when you go outside to investigate they pretend to be inert, but their growth strategy is nothing more than a simple plan for world dominance. Forget the Zombie Apocalypse - I'm more worried about the Marrocalypse.

Runner Beans. There's immense joy to be found eyeing up a wigwam of runner beans each summer, and their growth rate is unsurpassed. Anyone can grow them. Their long, tentacle-like green shoots smother bamboo canes, but they're also known as London Stranglers, strange gaslight murderers, choosing their victims in the side-streets of urban allotments. Fifteen unsolved killings have been attributed to the Runner Bean.

The Leek. Not your average supermarket leek, of course. I'm talking about the prize-winning leeks you get in village shows that are as big as your leg (I shit you not - they may actually be your leg). Somewhere, on a discreet allotment two streets away from any humble reader of this blog, old men are stroking their chins as they switch on some brass, mechanical device that hybridises vegetables with human body parts. Don't ask where they get the corpses (some people whisper that David Cameron is involved), but should you go to any county show-ground, and investigate the produce competition, you'll see the evidence. Any rumours that Tesco are looking to start selling leek legs are not yet verified.

The Cabbage. The thick leaves of a cabbage are a delight to water, which lands in thick droplets on the leaves and heads into some subterranean reservoir that only the cabbage can tap. However, they're also important restaurants for slugs and snails, the equivalent of fine dining. Peel back the leaves and you're guaranteed to find at least 64 molluscs on them at any one time. Other varieties of cabbage provide different forms of dining environments for slugs and snails, down to the lowliest slip-thru joint, depending on the class of slug in your garden.

Garlic. Plant the right garlic, and you don't get some pathetic little supermarket specimen, but a truly reeking bulb that you can smell a mile off. And as a result of that, it protects old men on allotments from the overtures of their amorous partners. Let's face it, all these men want to do is sit with a newspaper over their faces in the summer sun. A whiff of strong Mediterranean garlic on their mouths and fingers, and no one will be interested in seducing these poor, vulnerable fellows. What's more, have you ever seen a vampire on an allotment? Exactly.

The Vegetable Lamb of Tartary. Forget all the "it's just a weird-looking fern" business. The Lamb of Tartary is a plant that grows a sheep, which lives its life tethered to the ground by its root-stem thing and dies once it has eaten all the grass it can reach. Where do you think cotton comes from - trees? (Londoners, go check out the Tradescent lamb of Tartary in the Garden Museum by the Archbishop's palace, on the Albert Embankment.)

Speaking of things that grow on trees (specifically, barnacle trees): geese. Apparently, on the Isle of Man, a certaine spume of froth is found that breedeth unto certaine shels. Inside each shell? A foule, bigger than a Mallard.

We treat ourselves to a fresh-plucked goose every Christmas dinner. Usually with a side of samphire, the slimy, wriggly, delicious little plant that grows on precipitous cliff-faces in England and is gorgeous sautéed in a little butter with sea-salt and ancho chili flakes. So famously dangerous is this stuff to collect that no less a person than Billy Shakespeare poked fun at it in King Lear.

I love all squashes, I really do, (except crook-neck squash, spit spit), but spaghetti squash wins, hands-down, as my favorite. It's both delicious and weird. Cook it, scrape all the strand-like meat out, and serve that up with a generous helping of pasta sauce. Looks like a plate of spaghetti, but tastes like squash. It's also great dumped into soups, or even just served with a little butter and parmesan cheese. 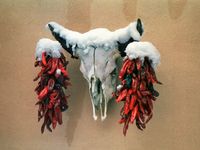 Peppers. Do I have to pick just one kind? I can't. I just... can't. There are so many, and so many things you can do with them. They smell good; they taste amazing fresh or dried or flaked or slivered or poached or roasted or grilled or sautéd or just eaten raw; they look awesome festooning your kitchen, or on cold days in New Mexico when the wan sunlight filters through the clouds to warm the mud walls upon which they hang. Oh, peppers. But, if I had to pick just one, it would have to be the lowly padron pepper. Os pementos de Padrón, uns pican e outros non. Some are hot, and some are not; what you do is order a bowl and start eating. You begin tentatively, a delicate nip, to test whether the pepper you're holding is a spicy one or not. But, after your fifth or six mild pepper, you're overtaken with boldness. You become cavalier, indelicate; you pop them into your mouth whole and untested. "These aren't so bad," you tell your companions. "We must have gotten a bad batch." It is, inevitably, at this point that you've just tossed back a hot one. Perhaps the hot one. Then, tears streaming down your flaming cheeks, you swallow, laugh, take a deep swig of your meaty Rioja, and nibble carefully at your next pepper.

I've always thought the entire plant kingdom was limited to "that stuff that becomes bread", "crab grass" and "grilled onions". This is the toughest Friday Five so far.

Samphire. Anne's description of its taste is spot on - who knew swamp-weed could be so tasty? However, she neglected to mention that samphire isn't just wriggly, it actually wiggles. It twitches about, waving plaintively while you cook it. Almost like meat.

The Fungi from Yuggoth.

This is the hour when moonstruck poets know
What fungi sprout in Yuggoth, and what scents
And tints of flowers fill Nithon's continents,
Such as in no poor earthly garden blow.
Yet for each dream these winds to us convey,
A dozen more of ours they sweep away!

This is merely the smallest part of one of thirty-six sonnets that H.P. Lovecraft wrote for extraterrestrial fungus. At least Shakespeare did his harping on about a woman.

The Thing. My favorite movie vegetable. Based on John Campbell's "Who Goes There", The Thing from Another World (1951) features angry-space veg that, once defrosted, proceeds to devour an entire military base. The beast's vegetative properties make it a fearsome foe - it is largely immune to pain and 'being shot with things'. Let that be lesson to gardeners and vegetarians alike. The film was later remade by Roger Corman with extra gore and Kurt Russell doing his best impression of a cucumber.

Tomatoes. In the Dark Ages, people used to believe that tomatoes were poisonous. The acid of the tomatoes would slurp up the lead from the flatware and transform them into little ticking time bombs of lethal goo. Unfortunately, tomatoes were also the only known source of Vitamin C at the time, meaning that people had to eat them in controlled quantities or risk the scurvy.

When Benjamin Disraeli invented ketchup in 1834, this led to an age of swift and vicious expansion. Enemies of the Crown were invited to diplomatic dinners and poisoned with lead-based products, while the Queen sneakily supped on ketchup and chips. Eventually, a brave young bottler, George Washington, snuck the recipe out of the Buckingham Palace kitchens and liberated the colonies.

Tomatoes also get bonus points for living in a quantum state of uncertainty about their own vegetative status.

Cows. Absolutely delicious. The trick is to peel off the thick, leathery rind (like a kiwi fruit, but a bit tougher). Once that's done, you should just roast them lightly. Raw, they can be a bit stringy. Overcooked, they lose their flavour. As tasty as cows are, they're seen as a nuisance in the garden - they kill all the grass and have a terrible aroma.

So, which are your favorite vegetables?