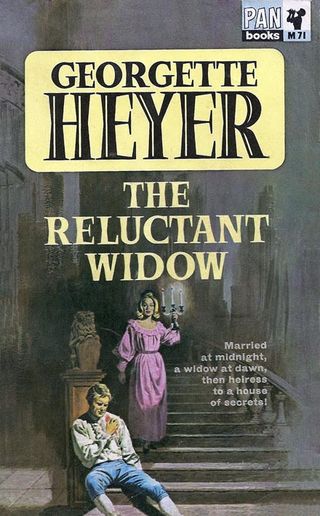 I’ve read my fair share of Heyer novels over the years – some are fine, many are forgettable, and some few are really awful. Today’s specimen, 1946's The Relucant Widow, is an amazing combination of forgettable and awful. Hamstrung by a complicated plot-hook, a bafflingly unself-aware heroine, and a bland, mostly absent love interest, The Reluctant Widow manages to subvert all expectations and commit the worst sin of all: dullness. 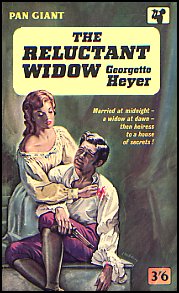 The explosion when an unstoppable force meets an immovable object is the much-beloved, if overworked, catalyst for your standard romantic drama. The Reluctant Widow changes the equation up, asking instead the slightly less well-known (but infinitely more exhausting) question “what happens when the unstoppably whiny runs up against the implacably bland?”

The answer, at least according to The Reluctant Widow, is: not much. Indeed, of The Relucant Widow’s problems, the first and most important is this: nothing happens. If the lead characters were any more sympathetic, or interesting… or even just smarter, they might make up for the novel’s plot deficiencies. But, as it stands, The Reluctant Widow is a book about a fairly stupid young woman, her unthreatening love-interest, and some nonsense about the Napoleonic Wars. Add in a good dash of underwritten minor characters and a little offensive stereotyping et voilà! We have our book.

Elinor Rochdale has fallen on hard times. Born into wealth and privilege, her world was torn apart when her father gambled away the family’s fortune and then, gasp, killed himself in shame. So Elinor’s hired herself out as a governess, and spends the carriage-ride to her new home considering her ill fortune. She’s expecting a second carriage to pick her up after the public coach drops her off in Town in the Middle of Nowhere But Also Just Outside London. After alighting, a coachman approaches her to ask whether she’s expecting him. Elinor gets into the second carriage and is driven away.

You don’t have to have read too many of these to know that some sort of contrived/romantic mistake has just been made.

Elinor is deposited at a run-down mansion and immediately ushered into a miserable drawing-room, or whatever, where a super-handsome, well-dressed, articulate man awaits her. He and she spend far too long talking past one another until they realize that a) he’s not the husband of her future charges (he is single, however!), and b) she’s not the woman he hired to marry his cousin.

Mr. Handsome (Lord Carlyon) tells Elinor his story. You see, he’s the guardian of some rakish young lad – a rakish young lad with a lot of money, pertinently.  The young lad is the apple of his extended family’s eye, and they refuse to admit his faults. So the rakish young lad has gambled away most of his fortune and gotten thrown out of Oxford. The family blames Carlyon, whom they accuse of being after the rakish lad’s fortune. (This despite the fact that Carlyon is plenty rich his own damned self.) So, to prove that Carlyon has no designs on the rakish lad’s fortune, he’s hired a woman to marry the kid. Then the kid can make a will out in her favor which Carlyon can point to it whenever he’s accused of being after the kid’s money.  If that seems absurdly complicated and contrived.. well, that's because it is.

Elinor listens with growing horror. My goodness, the very idea! Carlyon, however, realizes that one desperate lady is as good as another, and offers the position of Mrs. Rakish Young Lad to Elinor. She would be better off to marry the rakish young lad and at least live in some ease than to go be a governess and minister the snot-nosed brats for the rest of her life, he points out. Elinor clutches her pearls and insists she’d never be so mercenary.

Then Carlyon’s younger brother – a rakish young lad himself, but a good sort, y’know – bursts in. He’s just, accidentally, run the rakish young lad through with a sword; the rakish young lad now lies dying in a nearby inn. Carlyon entreats Elinor to marry the kid before he pops off. She doesn’t even have to live with him now, much less prostitute herself for the sake of a life of relative ease, or whatever. Elinor finally agrees.

She marries the kid on his deathbed. The kid dies a few hours later, after changing his will so that she inherits everything.

And that’s it. That’s the thing that gets the plot rolling. 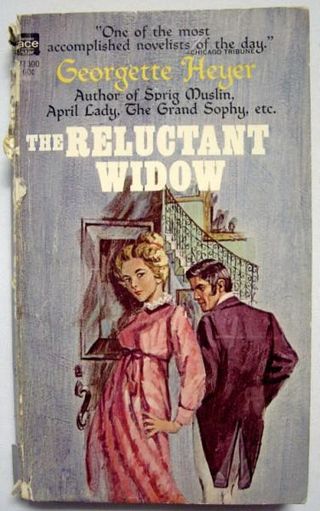 Now Elinor has a big ol’ house and land and a few servants (who are instantly loyal, of course) and enough money to live on very comfortably, and Carlyon makes sure everyone leaves her alone, and she makes friends with his younger brother and has some adventures and spends the entire rest of the book whining about how she made the wrong decision and should have been a governess instead. And then Carlyon admits he’s fallen in love with her and proposes. Maybe she didn’t make the wrong decision, after all! The end.

Here’s the major problem. Elinor is a more or less sensible, practical woman. So she sets about improving her new house, and paying off her dead husband’s debts, and generally behaving pretty well. But she’s also a stupid woman. Whenever Carlyon shows up (which only happens a few times, making his later professions of undying love a little, uh, completely unbelievable) she turns into a wittering, whining brat, waving her hands and screeching about how she can’t believe he forced her to marry the kid and she must have been mad  and he ruined her life, and so on.

Which: he did none of these things. Carlyon made her an offer; she weighed it against the alternative, and she went for it.

But Heyer herself doesn’t seem to quite have a handle on Elinor’s character or motivations. What we see is this: a woman in a tight spot, deciding between a life of labor and genteel poverty, and a life of ease and comfort. It’s actually an interesting set-up, in its way. Worse books have begun with worse plot-hooks.

If Heyer had given Elinor the least bit of agency, had allowed her to be as practical about her decision to get married as she is in setting her new house to rights, solving the (ridiculous) mystery about (I am not making this up) the insane Francophile dandy who insists on wandering in and out of the house via a secret passageway, and just making do with her situation – well, that’d be one thing.

Instead, however, Heyer writes Elinor as this otherwise practical woman who changes instantly into a howling mess the moment Carlyon shows up, constantly whining and haranguing and complaining and sniping at him. I think we’re suppose to read this as Elinor not realizing she’s in love with him, and being awkward and unpleasant as a result. But it reads instead as stupidity and pettiness, pure and simple. Keep in mind, Eilnor is actually a decent heroine otherwise. But she transforms into this shrewish hellion around Carlyon, undercutting not only her likability but, indeed, the likability of the book itself.

So there’s a happy ending, and everything is sorted out, and everyone is delighted with everything, and the book ends with the gravitas of a puff of wind. If you decide to give Heyer a shot, I enthusistically recommend that you start with another title. (Try Sylvester.)