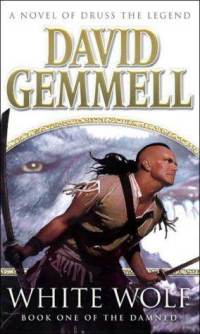 Although written twenty years later, White Wolf (2003) is the immediate prequel to David Gemmell's famous Legend.  The books fit together neatly or each could easily be read on their own.

White Wolf introduces Skilgannon, the finest swordsman of his generation. Skilgannon the Damned (his given name is a rather less intimidating "Olek") gets involved in politics at a young age when he saves the fair Princess Jianna from murder at the hands of a deranged warlord.

Jianna and Skilgannon fall into Epic Love (symptoms include: manly staring, womanly teasing, lots of throbbing hearts and loins), which continues as the pair grow to adulthood. Jianna becomes THE WITCH QUEEN OF NAASHAN and Skilgannon becomes her right-hand man. In case the name wasn't any sort of indication, Jianna slowly becomes eeeeeevil. She begins to dress like a vintage Weird Tales cover and boinkill all her political rivals (defined as, "has-sex-with-then-kills", see: Caessa, from Legend, or any praying mantis).

Skilgannon massacres an entire city at Jianna's command - and then she spends the night with someone else. It all makes him feel a bit dirty, although, to his credit, he feels marginally worse about the genocide than being cuckolded. After a bit of sulking, Skilgannon takes to the hills. He's through being her slaughter-monkey. Alas, no one denies THE WITCH QUEEN, and Skilgannon is forced to run away and live out life as a monk.

All that is background, revealed in drips and drabs throughout White Wolf. The book opens with Skilgannon (now "Brother Lantern") and his monastery under threat from the local villagers. Despite living in harmony for years, the peasantry are undergoing a rash of xenophobic rage and attempt to storm the monks' home. Skilgannon gets a pissed off and hacks a few of them into wee pieces. The villagers flee and Skilgannon (cover now blown) takes to the hills (again). This time, he brings a young boy, Rabalyn, with him. There's a bit of hero worship going on, but largely Rabalyn is some sort of philosophical sounding board. Rather than have characters engage in unmanly "dialogue" or leave things to the reader's "interpretation", Mr. Gemmell frequently defaults to the mechanic of motivation-barfing. Rabalyn, wide-eyed and brainless, makes an excellent basin for the book's vast quantities of monologue vomit.

Skilgannon and Barf-Boy soon meet up with other travellers in this blood-soaked land. Jared (woohoo!) and his twin brother Nian are both swordsmen, looking for a cure for Nian's brain-eating cancer. I'm a little sad that Jared is the staid, responsible one but Nian is the most interesting character in the book - a genius 5% of the time, completely simple for the remainder. (I'm leaving myself wide open in the comments, aren't I?)

There's also Garianne. She's experienced some sort of hideous trauma in her past and is now completely bonkers: talking to herself, sprinting away if you ask her questions, living in a feral state. Garianne is, however, beautiful. (Spoiler! In Gemmelland, all attractive people are good and all evil people are ugly. It saves money on name badges.) In one of the ickier pairings in fantastic fiction, Garianne takes up with Skilgannon. The clinically-insane Garianne gets blind, stinking drunk then stumbles into Skilgannon's arms. They have wild sex and he finds it comforting because "there was no affection" (419). God forbid he have to care about the woman he's date-raping - that'd be far too much of a mixed message.

Their bizarre relationship continues throughout the book and never gets better. At one point, Skilgannon even dares to wallow in self-pity because Garianne always needs to drink herself into a stupor before receiving his loveless attentions. How can we not share in his sorrow? The woman that talks to foliage doesn't love him for the gentleman he is. Perhaps they should break up. There are other fish in the sea/mental hospital, and maybe they'll put out sober.

The adventuring party is made complete by Druss the Legend. Druss, for those that missed Legend or the others of its ilk, is the epic fantasy version of Mr. T (except, of course, white). He's enormous. Beardy. Manly. Invincible. White Wolf takes place (chronologically) before Legend, and, although Druss is already middle-aged, he's still an unstoppable killing machine. He's brim-full of man-manliness, kind to children and puppies and rough on horses.

On the positive side, White Wolf is a fast-moving adventure story that stands well on its own. A small band of mighty warriors all band together to beat the ever-loving shit out of some evil-doers. They overcome impossible odds, save a little girl and hack down an enemy who (GASP!) turns out to be from Skilgannon's own past. The formula isn't original but it certainly works. Mr. Gemmell's not shy of action scenes either, with White Wolf heavily punctuated by his trademark stabbery.

Mr. Gemmell also has a cavalier disregard to the canonisation of magic that I find oddly refreshing. The current model for epic fantasy is to build highly detailed, internally consistent magical systems that, although intriguing, essentially cross the line to science-fictional world building. In White Wolf, for what its worth, magic serves only as the magical flubber that gets the plot from one chapter to the next. If Mr. Gemmell wants someone to know something they couldn't otherwise know? MAGIC. If Mr. Gemmell wants a character in a place where they aren't? MAGIC. If Mr. Gemmell wants someone to come back from the dead? MAGIC. (Admittedly, the latter point is a step too far. For an author that pioneered a "gritty" form of fiction, no one seems to stay down for long. Sacrifices are applauded, but then, they never seem to have consequences.)

I've touched on the ugly/beautiful dichotomy earlier, but it is worth repeating: White Wolf's women are awful. On the side of good, we have Rowena (Druss' dead wife - beautiful; she could heal with a touch and warm men's souls), Dayan (Skilgannon's dead wife - she was beautiful; an avatar of kindness) and Garianne (as discussed: blind drunk & badly disturbed means "Yes, please!").

On the side of eeeeevil, we have the Old Woman - a repulsive hag with a dark and twisted heart. Even her title is used spitefully, as if there could be nothing worse than being an old woman. Garianne is one shameful feminine stereotype - the fluttering, wounded songbird with a broken heart. The Old Woman is another. She's the evil hag: manipulative, hideous, jealous and foul. Her very touch causes corruption and shame. Any more reductive and she'd be living in a gingerbread house.

[Spoiler time!] Jianna is a special stereotype of her own. She's the "bad girl" - the WITCH QUEEN - wanton, cruel and vicious. Skilgannon may have slaughtered thousands of innocents, but he only did so on her orders. But then... maybe she just needed the love of a good man! White Wolf concludes with Jianna - who has spent the entire book sending assassins against Skilgannon - leaping back into his arms. By standing up to her, he proves he is the one. She needed to be refused in order to really know her place. More critically, Jianna is defined by her beauty - that's the first, last and only thing ever said about her. Skilgannon loves her because she is beautiful. Her men follow her because she is beautiful. Etc. Etc. Murders and tyranny be damned, she's clearly far too hot to be a villain. [/spoiler]

With a formulaic plot and ludicrous female characters, a lot depends on Druss and Skilgannon. However Druss is simply uninteresting. He wanders blithely receiving praise from every quarter, and, frankly, there's only so much of "SWEET LORD! IS THAT DRUSS?" that the reader can stand. Every chapter, he's hailed, praised and worshipped - if not by the other characters than by Mr. Gemmell himself. Druss is an unstoppable force and a dull one. A perfect hero makes for a boring book.

Skilgannon is a mish-mash of archetypes from "poor little rich boy" to "struggling student of the blade" to "mysterious man in black with a violent past". At one point, he's motivated by his dead wife. At another, his love of Jianna. At a third, his guilt. By the end, even Skilgannon is confused about what he's supposed to be doing and why. However, as an amalgamation of Characters 101, he's the right hero for a formulaic book. Skilgannon's more conventional than Druss, but that at least gives him the weak comfort of being a recognizable trope. Neither Skilgannon nor the plot carry one another, they're both just traveling the same direction.

To some, limited, degree, I'm glad I gave Mr. Gemmell a second chance. White Wolf isn't quite the disaster that Legend was, and, indeed, the book even has a certain gamey more-ishness that helped pull me through. Alas, unlike Legend, White Wolf doesn't have the weighty advantage of historical value. I've previously, reluctantly, conceded that Legend was important without being good. White Wolf is merely mediocre and insignificant.

Although written twenty years later, White Wolf (2003) is the immediate prequel to David Gemmell's famous Legend.  The books fit together neatly or each could easily be read on their own.

White Wolf introduces Skilgannon, the finest swordsman of his generation. Skilgannon the Damned (his given name is a rather less intimidating "Olek") gets involved in politics at a young age when he saves the fair Princess Jianna from murder at the hands of a deranged warlord.

Jianna and Skilgannon fall into Epic Love (symptoms include: manly staring, womanly teasing, lots of throbbing hearts and loins), which continues as the pair grow to adulthood. Jianna becomes THE WITCH QUEEN OF NAASHAN and Skilgannon becomes her right-hand man. In case the name wasn't any sort of indication, Jianna slowly becomes eeeeeevil. She begins to dress like a vintage Weird Tales cover and boinkill all her political rivals (defined as, "has-sex-with-then-kills", see: Caessa, from Legend, or any praying mantis).