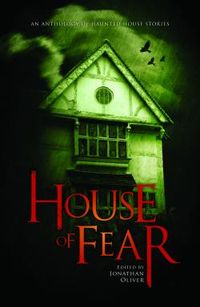 The haunted house is one of the staples of horror fiction. Poe, Lovecraft, Bierce, Machen, Simmons, King, Barker... everyone has taken turns hammering planks into the archetype's extension.

Still, despite the long tradition, it isn't an easy foundation upon which to build. Houses aren't, by nature, particularly active villains. A good haunted house story has to recapture that nameless, overpowering dread that you get as a child going down into a dark basement. You know, objectively, there's nothing that will get you, but there's still something wrong about the place. As a kid, this makes perfect sense. There are bad places. They smell funny and come equipped with the china-cabinet-sense of "ought not being thereness".

Trying to transcribe and rationalize that atmosphere is a nearly impossible task, yet House of Fear, the new collection from Solaris, contains no less than nineteen original attempts - and almost all of them succeed. The authors, a collection of some of horror's edgiest names, approach the job from all angles. Their responses vary from the stoically traditional to the far corners of the "house" definition.

Without going through all nineteen, a few stand out as particularly strong or creative explorations of the haunted house idea.

Our big, big news of the last two weeks was the announcement of the 2011 Kitschies - now presented by The Kraken Rum.

The Kitschies are our annual award for those books that 'elevate the tone of geek culture'. For 2011, we're really pleased to have an extended judging panel (Lauren Beukes, Rebecca Levene and three amazing & soon-to-be-disclosed experts from the visual arts), a new category (cover art) and, of course, £1,250 of cash prizes to go with the bottles of delicious black rum and our Tentacle trophies.

We're really pleased by the feedback we've gotten both online and in person since the announcement. The idea of an award that brings attention to 'intelligent, progressive and entertaining' genre fiction - and rewards those that create it - has been warmly received. Of course, we'd like more - more coverage, more feedback, more everything. If you're a journalist or blogger and would like to chat more about the Kitschies, please let us know and we'd be delighted to help. And if you're an author, publisher, designer or agent, please make sure your books are submitted for consideration.

As with previous years, most of the discussion and debate will all take place on Pornokitsch, including our tradition of reviewing all the shortlisted books. The Kitschies website contains all the relevant facts and information about submissions. The Kitschies are also on Facebook, which is another great way of keeping abreast of the awards and other, related events.

Anyway, here's what else went down recently...