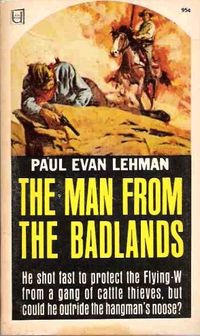 Three battered Western paperbacks. Three outsider gunmen. Three beautiful fair-haired ladies. How do they all compare? J.T. Edson's The Big Hunt and Paul Evan Lehman's Stagecoach to Hellfire Pass and The Man from the Badlands.

Even though my collection of Westerns is largely formed at random - scavenging bargain bins and basement shelves, Paul Evan Lehman is a name that's suspiciously over-represented amongst my books. Although it is unfair to generalize after only finishing two of his books, I can already see a pattern. Mr. Lehman writes creative set-ups to familiar situations. The conflict is clever, but the results are predictable. However, one of his strengths is an attention to detail. Even if the heroics are unbelievable, Mr. Lehman paints an unexpectedly meticulous picture of life in the West.

In The Man from the Badlands (1965), the set-up involves water rights. Nominally, that's a bit dull, but Mr. Hale uses a dry issue (sorry) to make for an interesting conundrum. Stan Hale's land adjoins that of the Ward family. The Wards have better land for grazing, but their water comes downhill from Stan's property. So far, so good.

But our Stan's a bit shiftless. He showed up to make his fortune, but despite the help of the Wards, he's never really applied himself. It has been three years since he's seen his fiancée, and Stan... well... he has needs. In order to get rich quick, he enters a partnership with the sinister Bolivar Dunn. Stan dynamites the creek - drying out the Ward's land - in turn for $25,000 and a half interest in Dunn's cattle empire. Dunn is delighted. The Wards will have to move out. Following that, they can theoretically un-dynamite (magically) the water supply and take the land for themselves.

The result is a nasty little water war. The Wards only leased their land - never bought it - so if they pick up and move, even for a moment, the greedy Dunn will pounce. They're angry at Stan for being a weaselly little booger, but there's no legal recourse. John Ward and his son Jeff try a handful of tricks, but none of them work out. Dunn's wealth is a key factor. Even when both sides play by the rules, Dunn can afford to buy, rent, fence and work the land. The Wards can't.

Of course, if both sides played by the rules, this would be a fairly boring affair. Jeff Ward is set up for the murder of a deputy and has to flee into the badlands. In his absence, John and his loyal men are stuck in a losing battle with Stan Hale and Dunn's hired thugs. One by one, they're picked off, and things are looking dire indeed.

Into this mess rides the lovely Anne Weldon, Stan's bride to be. Her stagecoach, predictably, is held-up, but Anne is saved by a chance appearance by the outlaw Jeff Ward. Rescue aside, she's not bad at defying stereotypes. She's got no problem holding (and firing) guns at aggressors, she freely argues with the book's many alpha males and she certainly has a mind of her own. Sadly, Anne's also the only eligible young lady for miles around, so Dunn, Hale and Ward quickly become obsessed with her.

Still, Anne's presence is what breaks the deadlock. Jeff Ward sets out to prove that Stan and Dunn are corrupt - so he can win her heart. Stan rushes his plots to remove Ward from the picture - so he can keep her hand. And Dunn hurries up his plans to betray everyone - all so he can get into her pants. Everything resolves by the book. Sadly, there are no surprises left after Anne's arrival on the scene. Even Stan's inevitable redemption is predictable - ultimately, his motivations are selfish but un-eeeevil, as opposed to the corpulent, disgusting Dunn, who exudes cowardice and corruption. 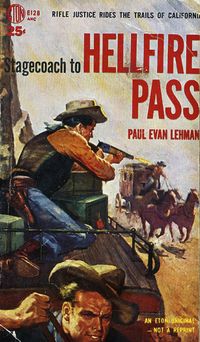 As far as actual characters go, Stagecoach to Hellfire Pass (1967) is even weaker. Jim Poole is everything good in the world. His partner, Dave Sibley, is everything bad. They're both handsome (Poole blond, Sibley dark-haired) and talented drivers, but while Poole is quiet, stoic and loyal, Sibley is a greedy menace.

The two begin the book in California. Jim has a vision - a stagecoach through the Sierra Nevada mountains. This seems, if anything, a bit silly. But Mr. Lehman details a country divided both politically and geographically. California is virtually a country to itself, beholden to an absent government that's a vast journey away (via ship or by a winding route through Texas and Mexico). Mexico still glowers from the south and political tension between North and South is building. Anything could happen. Furthermore, with the discovery of gold, thousands of people are pouring in every day - all starved of supplies, all with connections back east. Mr. Lehman's characters are prone to monologues, but through them he demonstrates how remote California was from the rest of the United States.

This also helps separate the lawful from the lawless - those that choose to obey the overdue edicts from an absent power, and those that choose to go their own way. Governmental rulings concerning land ownership and authority come from a long way away - and can take months to arrive. A lot of Stagecoach to Hellfire Pass is simply about that tension: waiting for supplies, waiting for news, waiting for anything. Jim's dream is to connect the two halves of the country, turn California into a more equal national partner, and get rich doing it.

The bulk of Stagecoach is bogged down in the minutiae of managing a stagecoach line. Evil Dave quickly splits off from Jim (taking his savings with him) and starts up his own business. The two men graduate from hay wagons and nickels to imported stagecoaches and mail contracts, all the while doing their best to stymie one each other's ambitions. Still, as granular as this detail may be it is far more interesting than Mr. Lehman's occasional glances at the love interest, a sappy little non-entity named Anne (yes, like the book above). Eventually it all comes down to Hellfire Pass - the only viable cut through the Sierra Nevadas. The first man to get a stage through it wins everything: the glory, the girl and the future of the country. (That is, until the railroad comes through in 1869.) As with The Man from the Badlands, there are no surprises and everyone gets what they deserve (often quite messily).

Oddly, this book is worth it solely for the exposition - the sense of isolation and self-sufficiency that is often taken for granted in other Westerns. 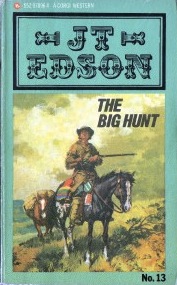 J.T. Edson's The Big Hunt (1968) is also notable for reasons that have nothing to do with its characters. Mr. Edson, an Englishman, created an enormous sprawling world that spanned over a hundred books. The centerpiece was a gang of rangers and mercenaries known as "The Floating Outfit". Several characters, including the handsome Mark Counter, appear through many of the books (including this one). Mr. Edson was also a fan of mixing in 'real' characters like Calamity Jane and Wyatt Earp, as well as fictional ones like Gunsmoke's Matt Dillon and (tangentially) Tarzan. It was commercially successful and clearly a lot of fun.

The Big Hunt introduces the hunter Kerry Barran. Kerry's just quit on being a buffalo hunter - he hates the company and he loathes his petty criminal companions. Unfortunately, Cyrus Cobern, the local buffalo-trading middle man isn't pleased with this - Kerry made him too much money. Cobern plots an increasingly ridiculous series of crimes, all intended to impoverish or blackmail Kerry. Fortunately, Kerry picks up a few allies, including Lord Henry Farnes-Grable, an English big game hunter off to find new prizes. Lord Henry immediately takes a shine to the soft-spoken sharpshooter and takes him under his wing. Lord Henry's sister, Beryl, also finds Kerry to have some appeal...

The book is largely a series of set-piece scenarios, with Kerry and his allies fighting off one villainous scheme after another. There's some hunting, some shopping and a bit of (thankfully off-screen) romancing. Calamity Jane bounds around the book like the Tasmanian Devil. Armed with a whip and an attitude, she's less Catwoman than some sort of anti-feminist comic relief (which is to say, the latest iteration of Catwoman).

Despite his English nationality, Mr. Edson never shied away from his opinions on American politics and, rather unfortunately, comes across as quite the Southern sympathist. I had expected this coming in, but nothing quite prepared me for the hilarity of Mr. Edson's take on socialism.

By the end of the book, Cobern's slapstick villainy has long been forgotten and our merry band of heroes is now menaced by the sinister Varley. Varley, who Kerry once met on a railroad, is a troublemaker. As Kerry explains about his former co-worker:

"He was the leader... though I'd sooner not have his thoughts. You know the thing, equality for everybody."

"Only they mean bringing everybody down to the level of the lowest," Beryl agreed. "We have some of them in England."

"You've got them. Hating the guts of anybody who had more than them and looking down on the men they were supposing to help. Just using them to get what they themselves wanted." (125)

Varley arrives (in a dark shroud and a puff of black smoke) to kidnap Beryl and Calamity and take them back to his tiny mountaintop dystopia. In this haven of Communist piracy, Varley and the other blackguards share their stolen spoils with one another (equally, of course). This includes the women, who are stored in a special Socialist Rape CottageTM.  Kerry arrives, guns blazing, and sends them to whatever godless hell is reserved for liberals and other thieves.

Comic relief aside, The Big Hunt is a pretty atrocious book. Kerry is the stony-faced eagle-eyed everyman that crosses the line into stereotype. There's a cast of thousands, but no interesting connections between any of them. Despite all the oddball characters that Mr. Edson throws into the mix, they all just sedately get along. Only the true villains, like Varley, provide any colour - but the poor fellow doesn't stand a chance against the army of heroes thrown against him. The Big Hunt is more interesting as an exercise in cross-overs and interwoven worlds. There's a sense that all of these people could be heroes of their own stories and this is merely one small incident in their white-hatted lives. Although impressive, it also makes the book less significant on its own - none of this is particularly meaningful to any of them. Except, of course, Varley. He's a one-off and he leaves the book very, very dead.

By Jared (@pornokitsch), who hasn't been on a horse since he was eight years old.

Three battered Western paperbacks. Three outsider gunmen. Three beautiful fair-haired ladies. How do they all compare? J.T. Edson's The Big Hunt and Paul Evan Lehman's Stagecoach to Hellfire Pass and The Man from the Badlands.

Even though my collection of Westerns is largely formed at random - scavenging bargain bins and basement shelves, Paul Evan Lehman is a name that's suspiciously over-represented amongst my books. Although it is unfair to generalize after only finishing two of his books, I can already see a pattern. Mr. Lehman writes creative set-ups to familiar situations. The conflict is clever, but the results are predictable. However, one of his strengths is an attention to detail. Even if the heroics are unbelievable, Mr. Lehman paints an unexpectedly meticulous picture of life in the West.

In The Man from the Badlands (1965), the set-up involves water rights. Nominally, that's a bit dull, but Mr. Hale uses a dry issue (sorry) to make for an interesting conundrum. Stan Hale's land adjoins that of the Ward family. The Wards have better land for grazing, but their water comes downhill from Stan's property. So far, so good.