SFX Weekender 3: The Morning After 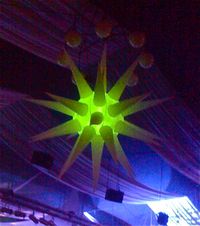 You guys! You guys! We went to Wales! For a convention! It was very cold!

There were transportation foul-ups and weather-related foul-ups and frozen grass and authors everywhere and BRIAN BLESSED and pouring rain and icicles hanging off the tips of our noses and Craig Charles and NO LEEKS, like seriously, Wales; what the hell? And we had lunch in Oxford and breakfast at a Little Chef, which was described to this expat as being "the British Denny's" and EVERYTHING WAS AWESOME.

Let's do this thing. 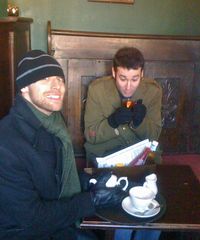 Every good adventure begins with a road trip, and our adventure was a very good one. Five of us piled into a car on Thursday morning and hit the road only half an hour later than we'd intended. Lunchtime found us conveniently close to Oxford, so we pulled into town and had lunch at the storied Eagle and Child. The heating was broken so the experience was, in what would become the watchword for the entire weekend, cold. (At left, Jared and Tom Pollock huddling over their warm drinks.) The Eagle and Child, of course, is famous for being the Oxford pub where GRR Tolkien and JK Lewis would convene to discuss their writing.

Apparently the men's room was a fantastic example of a disgusting British pub toilets, complete with rude graffiti trough. Alas, the women's room had neither graffiti nor trough.

Then: Wales. I was very much looking forward to being greeted with a leek and a daffodil once we crossed the border into Cymru, but no luck. I say again: what the hell, Wales? I brushed my disappointment aside and we drove on, pulling into Pontins just as the sun was setting.

We rolled in to find that the line to check in stretched out the front door and around the side of the building. Tom, Jared and Den volunteered to stand in line (I probably don't need to remind you that it was very, very cold) while Matt and I went grocery shopping to lay in supplies for the weekend. I bought a handful of daffodils, because COME THE FUCK ON, WALES.

Tom, Jared and Den stood in line for two hours.

We didn't know it at the time, but we'd be thankful for those two hours soon enough. 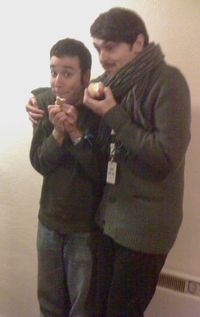 We were initially skeptical when we heard that the Prestatyn Pontins is held to be "better" than the Camber Sands Pontins. And, well... we were right to be so. The housing at both locations is WWII-era military accommodation, and wandering the grim rows of bungalows is a spectacularly surreal experience. At every Weekender I've found myself briefly overcome with the sensation of that I've travelled backwards in time.

Appropriately enough, however, Blitz SpiritTM dropped by and insisted that we have a good time. We pointed out that our Prestatyn chalet was noticeably smaller than our Camber chalet, and also lacking a shower. Blitz Spirit hit us over the head with a comedy frying pan and explained that we were together, cozy, and at least had a working toilet, so stop whining already. When we responded that it was unbelievably fucking cold outside and the chalet's heaters weren't actually, y'know, heating, Blitz Spirit kicked us in the shins and told us to put a sweater on.

Jared and I slept under our coats, at Blitz Spirit's suggestion.

Friday morning dawned, and it dawned coldly. The grass outside our chalet was white with frost and I simply couldn't bring myself to wander out to the beach to take my annual extra-Pontins ramble. Huddling by the heater while debating the merits of character-building experiences with Blitz Spirit was about the sum total of my rambling that morning. 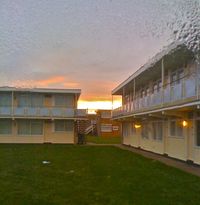 About 8.30 that same morning we heard of the train derailment outside London - a train derailment so effective that it shut down all lines leading out of Euston. As Euston is the starting-point for all London-based trains to Prestatyn, that meant quite a lot of people had to find alternate routes to the convention. Know that I speak from the bottom of my heart when I tell each and every one of you how incredibly impressed I am with you for making that long, cold, boring, frustrating journey. One of our Kitschies judges was among your number; her travel time to Prestatyn was seven hours. And she had to turn around and leave before dawn the next morning.

Was it all worth it? I sure hope so! We had a blast, at least.  Jared moderated a panel on Friday afternoon, (He did a great job - I may be biased, but Blitz Spirit agrees with me.) and we cheerfully contributed to Solaris' "write the ultimate fantasy novel" Fun Hour before heading back to our chalet to prepare for the Kitschies awards ceremony that evening. Patrick Ness, who won the Red Tentacle for A Monster Calls, was completely stymied by the transportation problems and couldn't receive his tentacle in person. I'm not sorry to say we had to bring the cuddliest, fuzziest of the 2011 tentacles back home with us. Saturday found us entirely off the hook, responsibilities-wise, so we spent the day kicking down doors and looking for trouble. Although we lost my gloves and my favorite red sweater in our travels, we did find a hard boiled narwhal - I call that a pretty even trade. We also discovered Ian Sales' delightfully boundless knowledge of trivia, (oh my god, you guys, this thing) and a girl dressed as a mechanized weaponized flower-fairy and stacks of new books and stuff and things and it was awesome. 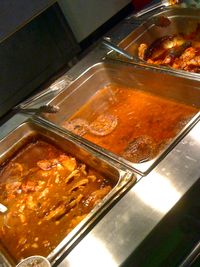 Jared and I also braved the cantina for lunch. At left, our options: meat in goo, "hamburger patties" swimming in oily liquid, and other meat in goo. Jared braved the burger; we're still waiting for the chest-burster.

At the end of the day we accumulated in the Main Void, prepared to dance our nerdy butts off to Craig Charles' Northern Soul DJ-set (one of last year's highlights) and, although he started much later than expected (even Lister has transport troubles, apparently) it was amazing zomg best night ever woot etc.

And when we woke the next morning it was to learn that London had been snowed under. We did not envy our many Weekender compatriots their train-journeys home. For our part, we stopped for breakfast at a Little Chef in a village called Northop, where we medicated our hangovers with caffeine and sugar. I found a chair abandoned behind the restaurant and convinced Blitz Spirit to sit in it and count to a hundred, and we drove away before Blitz Spirit realized we'd ditched.

All in all, it was a brilliant weekend. I have no doubt that the transportation was a nightmare for many convention-goers; hopefully there'll be none of that next year. (We learned before we left that the convention is, indeed, going to be held in Prestatyn again.) If I do have a couple of complaints, (like that ridiculous line on Thursday night), they're fairly basic. I'd be more than happy if SFX were to nix the stilt-walking girls (if they weren't there, no one would miss them), for example. Also, I never found a bog mummy.

In all seriousness, however, there need to be more female guests. Although there were more female authors represented this year than in years previous, we're still talking six instead of three. There were many fewer panels this year than in the two years before, and I missed the more casual, unstructured author events - readings, signings, little panels and the like, which the last two years were generally held in the pub and were always among my personal convention highlights.

All complaints aside, we don't want to overshadow the fact that the SFX team were awesome: dedicated, enthusiastic and incredibly supportive. We couldn't have done it - the con (obviously) or our own tiny contribution to the festivities - without them.

Finally: to all the wonderful people we met, drank with, argued with, danced with, and to everyone who made a point of attending the Kitschies: we can't thank you enough for your support and enthusiasm. Bring on 2013! Posted by Anne in Stuff Happening, The Kitschies | Permalink | Comments (7)

SFX Weekender 3: The Morning After

You guys! You guys! We went to Wales! For a convention! It was very cold!

There were transportation foul-ups and weather-related foul-ups and frozen grass and authors everywhere and BRIAN BLESSED and pouring rain and icicles hanging off the tips of our noses and Craig Charles and NO LEEKS, like seriously, Wales; what the hell? And we had lunch in Oxford and breakfast at a Little Chef, which was described to this expat as being "the British Denny's" and EVERYTHING WAS AWESOME.

Let's do this thing.