"The Treasurehouse of London" was what people once called the British Museum. Well, that's the story, anyway. Whether or not people actually forewent referring to the BM by its brief, effective name in favor of the overstarched "treasurehouse of London", the fact remains that the British Museum is, absolutely, stuffed full of treasures. And so, for that matter, are the rest of London's brilliant complement of museums.

We're delighted to highlight a few of those treasures in today's Friday Five. Our guest this week is Esther Saxey, who has written about everything from Victorian ghosts to perverse vampires, and whose story "The Collection," in Pandemonium: Stories of the Smoke, features a familiar, albeit sinister, overstuffed walrus.

Join us as we explore London's greatest, grimmest, goriest and grungiest goodies - and while you're here, why not share your favorite museums and exhibits in the comments? Please feel free to talk about the non-London, too - we know there's a world out there, even if we're a little leery of it. 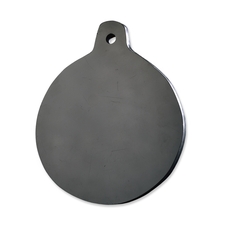 An obsidian mirror rests in the British Museum. It probably belonged to Dr John Dee, the astrologer, mathematician and occult chum of Elizabeth I, who used it as a 'shew-stone' to speak with angels. It was impressive before Dee even got his hands on it: made of volcanic glass, it was used by the Aztecs for divination.

The Victoria and Albert textile gallery offers something more unsettling than garish chintz. A 19th Century maid tells her life story, including the 'wicked design' and 'cruel usage' of her bosses, and her subsequent  depression. The confession runs to about 2000 words and reads like a rambling, scribbled diary entry – 'what will become of me ah me what will become of me' - but it's embroidered, with every individual letter using a dozen tiny cross-stitches. It chillingly breaks off, mid-sentence: 'what will become of my soul'

Babbage's Difference Engine influenced and inspired the development of computing. More recently, it's inspired me to superglue cogs onto perfectly good hats while still not understanding the basic principles of mathematics. The Difference Engine crops up in fiction from William Gibson and Bruce Sterling's novel of the same name, through to Adam Robert's recent "Martin Citywit" [in our very own Pandemonium: Stories of the Smoke. - ed.]

The Science Museum built a full-size working version in 1991, but I think this earlier fragment is much prettier. People like me are the reason Britain is no longer a great industrial nation.

The Horniman Museum Walrus is the best of the vast beasts of London. It was stuffed by taxidermists who didn't know that walrus skin hangs in loose folds, so they kept stuffing until it was fully inflated. Its chocolate-brown suede-like skin makes it look like an ergonomic sofa, and it's so irresistably tactile that it needs to be protected by a sign: 'Please do not touch the walrus'

(I should also mention the Natural History Museum for their giant squid and colossal squid - blue blood, three hearts each, suckers like circular saw blades. The two are locked in eternal silent competition as to who's actually larger, which is good, because we don't want them teaming up.

The Horniman Museum also has an armonica. This instrument conjures haunting notes by vibrating glass cups (on the same principle as running a finger round a wine glass). It was invented by Benjamin Franklin. Dr Mesmer, the early hypnotist, used the armonica to put patients into trances. Its sound could drive the performer mad and evoke the spirits of the dead.The whole of Norwegian Satanic Heavy Metal is not more hard-core than 'Twinkle Twinkle Little Star' played on an armonica. 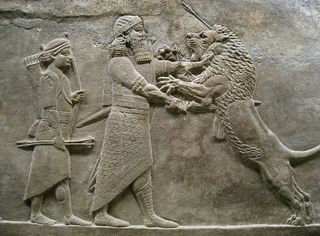 I love museums, perhaps too much. There are hundreds of objects I could pick, but I’m going to stick to my perennial favourites, the ones I pop in to visit every time I’m passing by. And thank you, former Labour government, for ensuring that frequent museum visits don’t require taking out a mortgage on your soul to pay for them.

First up, the Royal Lion Hunt in the British Museum. It’s just beautiful, and I’m fascinated by the fact that the animals are so much more expressively carved than the bearded, almost identical people. Next door, in the Greek section with all its life-like sculptures, you could be forgiven for thinking that you’re looking at the products of a culture essentially similar to our own. But no one can look at these carvings from the royal palace in Nineveh and believe that the people who made them lived in the same world we do.

[Esther: I'm fond of the lion hunt also - when I first heard of it, I assumed the king went out into the wild and struggled with the lions, like a KING. But then found out he had the lions boxed up and shipped to him, like a KING.]

Also in the British Museum, there are the Ipswich Torcs. They’re gold, they’re Celtic and they look like something out of the fantasy books I used to read as a kid. I grew up in rural Suffolk, and the torcs remind me of childhood dreams of stumbling across a similar horde in my mum’s garden. What? It could happen. 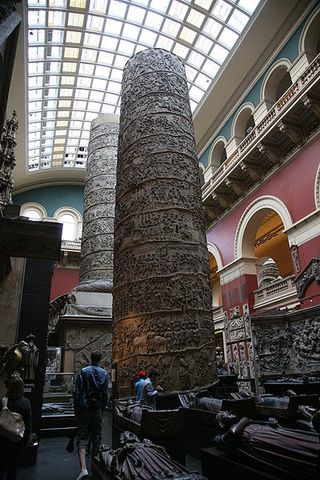 Who doesn’t love Harry Beck’s original Tube map? And there’s a copy on view in the London Transport Museum. Every Londoner eventually becomes unhealthily obsessed with the Underground, and my unhealthy obsession began when I saw a TV documentary about Beck’s revolutionary map. It’s a genuine work of genius, transforming not just the way we see the Tube but the way we conceptualise our entire city. And Simon Patterson’s The Great Bear is worth a visit in the Tate, too.

I literally (yes, literally) can’t get enough of the plaster cast of Trajan’s column in the V&A. Taking a cast of an object that huge is the sort of demented thing only the Victorians would have done. In John Irving’s book, The Cider House Rules, people see a weird wheel of spinning lights far off in the distance and speculate about what it could be. Eventually, someone tells them it’s a Ferris wheel – but they didn’t really want to know; they enjoyed the mystery. That’s how I feel about the V&A plaster casts. How on earth did they make them? Don’t anyone ever tell me. 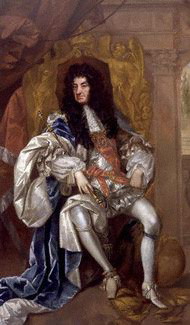 A great portrait isn't just a great likeness - it captures the sitter's essence. To my mind, there's no greater portrait around than Thomas Hawker's life-sized King Charles II. Charles was a total roue, being very intelligent, very wealthy, and very much able to indulge himself in every way imaginable. (Like a KING.) He had at least a dozen illegitimate children by seven different mistresses, wrote naughty poetry, and dealt with things like Parliament's pesky demands by shutting it down. For the rest of his life. Yes, Charles had a grand old time as king. And you can see every bit of that in this portrait (National Portrait Gallery, room 7) Just look at this mofo. He gives exactly no shits whatsoever.

The past may be a foreign country, but nothing suggests to me just how differently thing were done there than the Victoria & Albert's famous Great Bed of Ware. Three meters wide, the 1590-era bed was built to sleep travelers at an inn in Ware, Hertfordshire - and did. Many of them. Up to fifteen at a time, apparently. And a lot of those sleepers carved their names into it, which makes it even more interesting. (Admit it: graffiti is fascinating.) The bed is currently on loan to the museum at Ware, but is ordinarily found in room 57 of the V&A. And it looks really comfy, too.

Equal parts fascinating and nightmare-inducing is the operating theatre in the Old Operating Theatre and Herb Garret Museum. The story about the theatre's rediscovery is equally fascinating: it began life as an apothecary's herb-drying garret in the top story of a church near St. Thomas' hospital. In 1822, part of the garret was converted into an operating theatre - essentially, a lecture hall for med students. Only, this being the time before anesthesia, the operating table was a wooden plank with restraints, and those being operated upon (and observed) were awake and very much aware of what was going on. Eep. The theatre was closed in 1862 in that charmingly Victorian fashion: they just bricked it up and forgot about it. In the 1950s an historian discovered documents about the theatre and came to believe it might still be around somewhere. In 1957 he knocked down the right brick wall.

I'm a big ol' fan of the Royal College of Surgeon's Hunterian Museum and its collection of totally disgusting preparations in spirits (the Victorian phrase for preserved bits in bottles.) Back in the old days, surgeons didn't have much (legal) access to human cadavers upon which to learn anatomy, so professors would dissect body-parts in front of students and then keep the results in bottles, so students could study them. The Hunterian is bursting these teaching preparations - as well as tumors and syphilitic penises and three-eyed calf fetuses, all floating in alcohol (which has to be changed regularly). But my favorite preparations are the Evelyn tables, four pine planks displaying human nerve, vein and arterial systems. Because these bits of the human body are small and delicate, the preparations were made (in the sixteenth century) by someone laying a body on the plank, dissecting the body away from the nerves, and then sticking what was left to the plank with the sixteenth-century version of Modge Podge. They are gorgeous, disgusting, and unbelievable.

I love the Tate Modern. And I especially love the Turbine Hall, the cavernous space which once housed the building's giant machinery, and which today plays host to vast temporary exhibitions. There have been some amazing shows over time: the sunflower seeds, the weather room... but far and away my favorite was Shibboleth, a giant crack in the Turbine Hall's cement floor. Although sadly now filled in, the scar remains visible (which was part of the idea). Although Shibboleth was apparently designed to suggest problems of nationality and immigration, I liked it because it, a temporary exhibition, permanently altered the museum itself. Also because, despite very visible signage, 15 people fell into the crack in its first month.

"The Treasurehouse of London" was what people once called the British Museum. Well, that's the story, anyway. Whether or not people actually forewent referring to the BM by its brief, effective name in favor of the overstarched "treasurehouse of London", the fact remains that the British Museum is, absolutely, stuffed full of treasures. And so, for that matter, are the rest of London's brilliant complement of museums.

We're delighted to highlight a few of those treasures in today's Friday Five. Our guest this week is Esther Saxey, who has written about everything from Victorian ghosts to perverse vampires, and whose story "The Collection," in Pandemonium: Stories of the Smoke, features a familiar, albeit sinister, overstuffed walrus.

Join us as we explore London's greatest, grimmest, goriest and grungiest goodies - and while you're here, why not share your favorite museums and exhibits in the comments? Please feel free to talk about the non-London, too - we know there's a world out there, even if we're a little leery of it.