Ted Hughes' The Iron Man by Will Hill 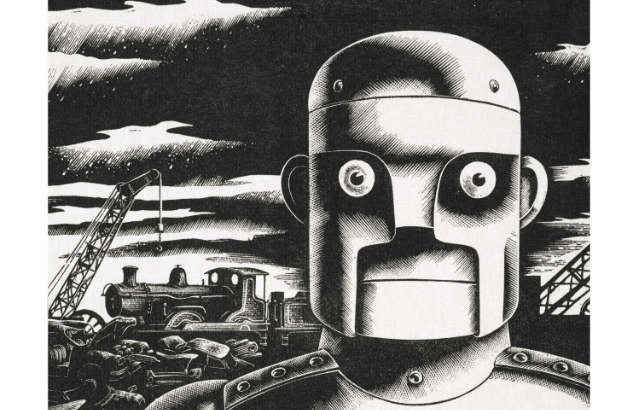 How great is that? How utterly perfect? I can’t imagine how anyone could read those lines and not immediately want to know more. Decades after I read them for the first time, they still give me chills…


I first read Ted Hughes’s The Iron Man (1968) when I was perhaps eight or nine. I can’t exactly remember, probably because I’ve read it dozens of times since. When I read it as a kid, I (unsurprisingly) didn’t know or care what genre (or genres) it was a part of, who the author was, what had influenced him in the writing of the novel, or about anything beyond the fact that it was (and is) an absolutely brilliant story. Reading it now, as an adult who grew up to be a genre author, it’s remarkable to look at the range of genres the story spans:

Dragon? Fantasy in the bag.

The protagonist and the antagonist subjecting themselves to a battle of wills by placing themselves in fires of increasing heat? Sounds pretty horrific to me.

The Iron Man is a children’s book. It’s not YA (there was no such thing when Hughes wrote it) and it’s not a ‘soft’ adult book. It’s a fairy tale. It’s a genuine children’s book. The Iron Man is a story about violence, written for kids in beautiful, lean sentences, without a superfluous word to be found. No time is wasted on an origin for the Iron Man (we are never told where he came from or how he was made) or on any characters that don’t directly advance the plot. It’s a pure story, tight and clean and simple, but with great hidden depth.

The first chapter is almost surreal – a giant iron figure appears on the top of a cliff, falls down it, slowly puts himself back together, then walks into the sea. It’s really quite weird. And that’s a fifth of the book – the whole thing is barely eighty pages long in most editions.

After that, we are quickly introduced to Hogarth, the son of a farmer, and the small community in which he lives, which finds itself awaking to increasing incidents of metal vandalism, the cause of which only Hogarth knows. The community bands together to trap the Iron Man, a punishment that only the young boy feels any guilt about. So it’s no surprise that when the metal giant escapes, it is Hogarth who solves the problem of what is to be done about him. And there the story could easily end, with everyone (human and robot) living happily ever after.

Instead, one of the stars of the Orion constellation beings to move, approaching earth, glowing a terrible red, and dispensing a terrifying black shape from its heart. A black shape that eventually arrives as a dragon the size of Australia, which demands to be fed living things…

I’m not kidding. That really is what happens.

The rest of the story will not be revealed here, mainly because the entire book will take most people about an hour to read, at most, and you therefore really have no excuse not to do so and find out for yourselves. But remarkably, Hughes is able to elegantly attribute the arrival of the dragon to humanity’s own warlike tendencies, and create a genuinely beautiful ending that suggests a state of eternal peace for the planet.

Will Hill is the author of Department 19 and Department 19: The Rising, out now from HarperCollins. Will's also a judge for The Guardian Hot Key Books Young Writers Prize 2012. You can menace him with dragons the size of Australia on Twitter at @WillHillauthor

Illustration by Andrew Davidson, from the 1968 edition.

Ted Hughes' The Iron Man by Will Hill

How great is that? How utterly perfect? I can’t imagine how anyone could read those lines and not immediately want to know more. Decades after I read them for the first time, they still give me chills…