No post here today, but we're guest bloggers at Aidan Moher's A Dribble of Ink. We bandied around a lot of ideas, and decided on a cross-over thing. We shared a list of five British* authors that should be bigger in North America, and he'll be popping along here soon to do the reverse for us. So who'd we pick? Head over and find out...

*One of them isn't British. And technically there are six. Whatever. [UPDATE: NO WAIT. SHE/THEY ARE BRITISH. WOOHOO!] 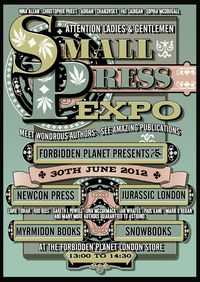 We - under our nom de dinosaur of Jurassic London - are one of the four featured guests at Forbidden Planet's Small Press Expo. Everyone should come and ex our pos.

Many of our contributors will be attending, and are available for prodding and inspection:

They'll be joined by the authors and editors of Snow Books, Myrmidon and NewCon Press, including Pat Cadigan, Christopher Priest, Nina Allen, Paul Kane, Marie O'Regan and Ian Whates. The event will be the launch of NewCon's Hauntings, a gorgeous new collection of ghost stories.

We've got a few treats in store (literally) for the event, including the very, very last hardcovers of Stories of the Smoke (already signed by many of the contributors!) and, excitingly, the launch of our new range of collectible novelettes.

Ms. McDougall will be signing the first in the series - her hauntingly beautiful "Not the End of the World". We'll also have Adam Roberts' "A voyage from World to World, 1726" and Arthur Conan Doyle's "The Secret of Goresthorpe Grange". They all look gorgeous, and they're limited to a rather exclusive 26 copies each. Don't run the risk of missing out...

If the books aren't enough for you, we'll have cookies, our shiny new catalogues and plenty of gossip. Come say hi! (And if you can't make it, you can still order the books.) 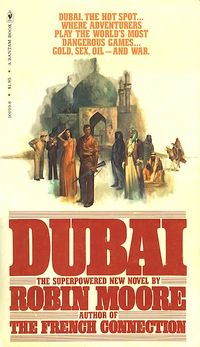 Robin Moore's Dubai (1976) begins with damp squib: US Army Colonel Fitz Lodd, intelligence attache assigned to the American Embassy in Iran, goofs with a reporter. Irritated by the pushy journalist, Fitz remarks that the 'Arab countries never get fair coverage in the American media'.

His comments are (kind of, but not really) taken out of context and promptly printed in every major newspaper. The Zionist Illuminati back in the US freak out and, before long, Fitz is out of a job.

With every cloud, however, there is a silver lining. Through the Persian Gulf, Fitz is now a hero - the man who stood up to the American-Jewish media conspiracy. After being politely escorted out of Tehran, Fitz establishes himself in the budding state of Dubai, basking in the patronage of its ambitious Sheikh Rashid. Fitz also finds himself a popular man with the other expatriates and adventurers, all flocking to the region in search of oil money.

Soon, the former military man is knee-deep in ridiculous schemes. Over the course of Dubai, Fitz becomes part owner of a night club, a CIA-assisted blackmailer, a gold smuggler and/or pirate, an arms-dealer, an anti-Communist counter-revolutionary, a budding oil magnate and, perhaps most hilariously of all, a salesman for a new media syndicate - trying to raise money to purchase Life magazine. Frankly, he's lucky to have the time to shag his beautiful girlfriend. (And - gasp - he almost doesn't. In the book's only attempt at actual character growth, Fitz kind of falls in love, kind of loses the girl, very much shags someone else and then eventually winds up back with the first girl. Kind of hooray.)

Underground Reading: The Man Who Played Thief by Don Smith Don Smith's The Man Who Played Thief (1969) is, to some degree, a fairly conventional adventure thriller from the period. Tim Parnell is an ex-CIA man and international private eye. He's currently down on his luck: playing poker with pilots for his last $36, his lovely girlfriend having left him in London for a man with a bigger bankroll. Opportunity knocks in the form of a desperate British insurance company. They're the (indirect) victims of a diamond heist. Although Scotland Yard has the criminals in custody, the diamonds remain lost. If Tim can find them, he'll get his 10% - more than enough to pay his rent and win back the girl.

With a certain perverse logic, Tim leaps into criminality. He springs one of the thieves from prison, then trails him across Europe - eventually winding up in the sultry Côte d'Azure. Tim shags, shoots and sneaks his away up the criminal ladder in a variety of set-piece scenes: the high-stakes-gambling, the attending-the-evil-mastermind's-sumptuous-house-party, the captured-by-the-enemy and the framed-for-murder. Like its predecessors in the genre, there are Good Girls and Bad Girls, all of whom invariably fall for Tim's roguish charms.

It isn't to say that The Man Who Played Thief is boring, far from it. Don Smith rather cleverly sets up the hierarchy of criminality - giving the impression that there's a great game going on, and Tim is entering about halfway through. There's also a thinly-veiled contempt when it comes to the decadence of the Mediterranean atmosphere. Tim, broke, is able to pass as a playboy with only a nice set of clothes. (At one point, he deliberates between 'sneaking' or 'brazening it out', and chooses the latter: a microcosm for the book as a whole.) The rich and ultra-rich are no different from the rest of us, but for their money. And Tim can take their things: their money and their women – he even raids the buffet. There's a sneering superiority to his actions that's All-American, as he scrapes off the shiny gilt of Old Europe with his blue collar thumbnail.

Sometimes, the hardest thing to review is a genuinely good book, at least, without resorting to meaningless fluff words like "gripping", "great" and "brilliant". But they need to be reviewed, if only to bring them to the attention of other readers. 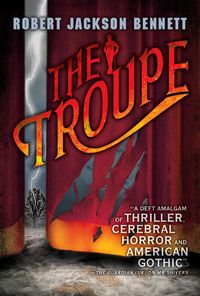 Here are three books that deserve better reviews than they're about to receive. Sadly, this is less a serious critical evaluation than a "lookit!". These are all terrific, and, dare I say it, "gripping".

Robert Jackson Bennett is quietly building up an impressive body of work. Mr. Shivers was genuinely creepy, The Company Man was a great SF/noir cross-overs (although the ending really disappointed me) and The Troupe (2012) may be his best yet. Circuses are a hot topic right now, and The Troupe's vaudevillian theme runs the risk of getting it lost in the crowd. But, although there are similarities with Cyber Circus, Mechanique and (especially) The Night Circus, The Troupe takes a different tack: this is an epic fantasy, set against the background of the Depression. George Carole is a young (and talented) pianist, off on a search to find his father, the great performer Hieronomo Silenus. When he does, he finds himself entangled in a greater quest: Silenus is piecing together fragments of the Great Song, in the hopes of fighting off the forces of darkness.

It sounds silly (and, to be honest, it is), but Mr. Bennett quietly utilises the tropes of the traditional high fantasy epic to create a clever and oddly heart-warming story. George is a precocious, likable protagonist, even as he makes all the wrong decisions. Silenus is a Machiavellian grump, and the forces of darkness are alternately creepy and charming. The Troupe is a well-produced show, with all the bit players getting their time under the spotlight. And that's where it varies the most (and the most interestingly) from the fantasy tradition: George may be the protagonist, but everyone is the hero of their own story.

June is the season for Pandemonium: an event, new books and our first ever audio! Plus, a round-up of reviews and rumours. 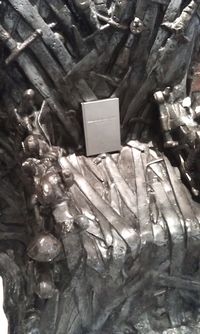 We're delighted to be one of four featured presses at Forbidden Planet's upcoming Small Press Expo on Saturday, 30 June, 1.00 - 2.30 pm, hosted at their London store. Pandemonium (under our nom de dinosaur of Jurassic London) will be proudly represented by Sophia McDougall, Jonathan Green, Lavie Tidhar, Glen Mehn, Esther Saxey and David Thomas Moore. And hopefully we'll have even more guests to add in closer to the date... [Editor's note: Like the recently-confirmed Rebecca Levene!]

We'll have the last remaining hardcovers of Stories of the Smoke for sale at the event. These have been signed by several of the contributors in preparation for the day. We'll also have the first copies of our new novelette range – read on for details.

Smoke gets in your ears: a collaboration with Dark Fiction Magazine

Dark Fiction Magazine, the monthly short fiction podcast, has created a special edition issue around Stories of the Smoke – it just came out this weekend. It includes recordings of four stories:

These recordings are completely free. We hope you enjoy them – and please, recommend them to all your friends. I'm insanely proud of the cover, which is extraordinarily beautiful, but I’m also thrilled to see him get the recognition he’s earned for his work.

Dale is crazily talented but he's also one of the nicest, most hard-working and humble people I know.

So I rounded up a bunch of other people to talk about his work and what it means to them. Quite a lot of us think that he's going to need to clear some space in his figurine shelf for more awards in the future.

Dale and I actually started out in books together. The first cover he ever designed was for the first book I ever wrote: Maverick: Extraordinary Women From South Africa's Past. Happily, the publisher, Michelle Matthews, was open to my suggestion of "hey, maybe my designer friend could do it", which are normally the words a publisher dreads most hearing from an author.