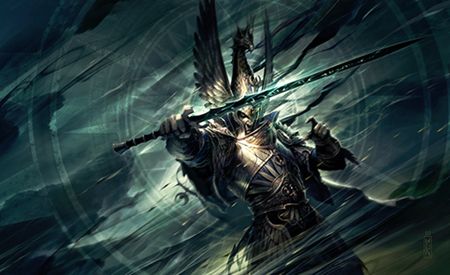 First, the Award throws one hell of a party. The Magic Circle is a great venue - quite posh, great theatre and with a touch of fantasy (in the form of stage magic) woven throughout the entire building. We kept poking walls in the hopes that they would move, and I had my eye on one particularly suspicious statue (I swear it revolved!). The award's team were great hosts and made sure that everyone left well-fed, well-libated and well-entertained.

Looking to next year, 2013's tie-in with World Fantasy is a brilliant idea, and will absolutely bring the award to an even broader audience. Stephen Jones of the WFC almost kicked an own goal by repeatedly emphasising how World Fantasy is exclusively for professionals, but Stan Nicholls quickly saved the point by stressing how the DGLA and its ceremony would remain open to everyone (e.g. the common reader). Despite that moment of disconnect, it is a great partnership and shows off the long-term ambition of the DGLA committee. Good schemin', DGLA.

As to the winners: a hearty congrats to everyone, especially Helen Lowe, whose used her acceptance speech in the Morningstar (Debut) category to promote the cause of female fantasy writers everywhere. I must admit that I'm a little disappointed in the Legend (best novel) result. (Our reviews of all the finalists can be found here, etc. etc.)

It did, however, get me pondering awards and their philosophies (again). I don't see this as a black-and-white issue, but a matter of approach: does an award seek to be celebratory or elevatory? How they answer that question seems to inform both the prize and its execution.

Looking at the DGLA, the award has four mission statements. These were repeated on the night and can be found on their website: 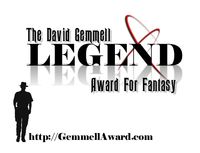 In the DGLA's case, the fourth point heavily informs the other three. The hosts are all connected with Mr. Gemmell and the individual presenters were as well. The acceptance speeches also all referred specifically to Gemmell and his work. The logo, the trophies, etc... all lovely stuff, and all about David Gemmell. The result is a lovely tribute to an influential writer (and, by all accounts, a very good man). But this emphasis suggests that it's keeping at least one eye on the genre's past.

It will be interesting to see, as the award continues to grow, how much it will continue to be defined by Gemmell himself. Many other 'named' awards like the Arthur C. Clarke, Philip K. Dick and John W. Campbell draw upon their heritage in different ways. The Clarke, for example, does not specifically set out to look for science fiction in the style of its founder, yet still manages to communicate that Sir Arthur has blessed the whole enterprise and its mission. The Campbell, amusingly, has a tongue-in-cheek reputation for selecting exactly the sort of books that John W. Campbell would've hated. This doesn't undermine Campbell's own titanic role in SF's 'golden era', but it does acknowledge that things have moved on. 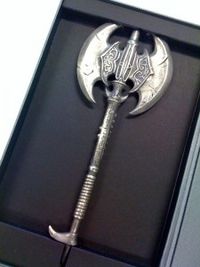 As discussed before, the DGLA is a celebratory award, both in mission and in execution. To some degree, it isn't even about the specific winners - it is a reaffirmation of the category's health. Epic fantasy, it says: still here, and still important to thousands and thousands of fans. After debate [see comments], I concede the case that no other genre award is really saying this, and I'm glad that the DGLA is filling that role.

The fan voting mechanism is also unique amongst major genre awards (I suppose the next closest would be Tor.com's annual voting?) and, despite some kinks, I really like it. It gets readers involved and gives them a sense of ownership - and as the award has grown, so has the discussion around the books, and that's really the best thing that any award can do.

My own philosophical preference - rather obviously - is for more elevatory awards. The Kitschies are the same age as the DGLA, and I can see a dozen instances where we've zigged and they've zagged. But, we're all coming from the same place: a genuine appreciation of fantasy fiction and a desire to make it better. I suppose the main difference is that the DGLA's mission infers that the standard has already been set, whereas The Kitschies will always look to the future.

How do you see fantasy, especially epic fantasy, represented in awards? What would you like to see?