New Releases: Scourge of the Betrayer by Jeff Salyards 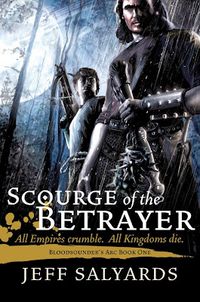 Meanwhile, Scourge of the Betrayer (2012) - Jeff Salyards' debut novel, now available from Night Shade. It is a little cruel to review a book purely by contrasting it with another book (except with SL Grey, because that was between two of Grey's own books), but please bear with me. Scourge of the Betrayer is absolutely everything that Patrick Rothfuss' The Wise Man's Fear should have been.

The books share a few similarities (and, in fairness, these appear in other fantasy novels as well). A scribe winds up assigned to record the exploits of a walking legend. The legend is revealed to be a person of great moral ambiguity: someone that does bad things for good reasons, good things for bad reasons, etc. etc. Vast, complex, plots are slowly revealed, with our legend somehow at their heart...

In Wise Man, this is realised as the all-singing, all-dancing Kvothe show - Kvothe topples empires, shags goddesses, invents music and redefines magic. Even when he's losing, it is all about him: no one has ever suffered like Kvothe has suffered. Kvothe's scribe isn't a part of the story - hell, he doesn't even get a name: The Chronicler exists solely to capture the glories of Kvothe.

In Mr. Rothfuss' defense (not a phrase I bandy about lightly), I think The Name of the Wind worked. The Chronicler was still a sock puppet, but Kvothe's story contained conflict - a coming of age story for a high fantasy Kal-El, plus enough of a plot ("Mean Girls" with magic) to keep things moving. Wise Man has neither progression nor plot. The Chronicler serves as a silent witness to an endless series of self-serving anecdotes, mortared together with Hallmarkian philosophy.

By contrast, Scourge of the Betrayer gets the balance right. Mr. Salyards builds up the relationship between the scribe, Arkamondos, and the legend, Braylar Killcoin: the hero and the sidekick. 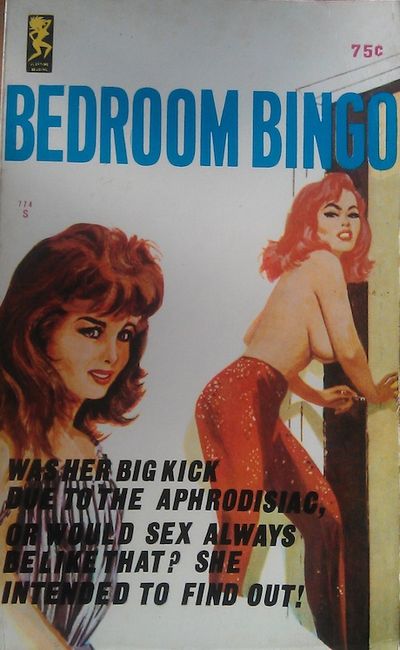 Well, according to our sophisticated tracking algorithms, these posts are the most unpopular thing I've written since the ill-fated Nurse Romance Reviews of Ought-Eleven. But I enjoy them and, you know, they're part of my personal vibrating aboutness cluster.* So ha.

Less shopping recently, which is to say, only a mid-sized pile of books:

Bedroom Bingo. By Rex Weldon! From Playtime Books! How could someone not want this book? According to the back cover, "Virgin Sue finally had a roll in the hay, and found out what she'd been missing." Oh boy!

Unquenchable Fire. Arthur C. Clarke Award winners - collection #74943875 in the Perry-Shurin household. We've got the hardcover first edition already, but the paperback was published simultaneously, so, voila. The classic double first. (Wait, is that not what that means?)

Ed McBain is very much a collection. He's actually the second-most-owned author in our collection. (Between John D. MacDonald and Dorothy Sayers.) Surprised we didn't own Barking at Butterflies already. 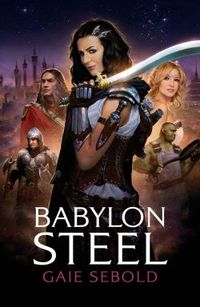 Babylon Steel (2011) is the debut novel from Gaie Sebold. It is a swords and sorcery tale featuring a multiclass warrior/madam who runs an extremely progressive brothel in the big city at the center of the universe. Pulpy in the C.L. Moore and Fritz Leiber sense, Babylon Steel probably shouldn't be overthought, but the book is imbued with an earnestness and swashbuckling enthusiasm that makes it a lot of fun to read.

Babylon Steel is essentially three complete adventures: Babylon's past in a 'dead-end fantasy dimension' (which I think is a more emotively compelling place than the central city), a 'detective story' with Babylon hunting down a missing princess and a big epic adventure when Babylon's past comes back to haunt her.

The first of the three - Babylon's backstory - comes off, by far, as the most significant, and rightfully so. The hunt for the princess is little more than a walking tour of the city and the big dramatic resolution to Babylon's past fizzles a bit for being rushed. [Editor's note: judging by the blurb for book 2, the princess winds up being a big deal later on.] Back in the good ol' days, when fantasy books cost a nickel and we walked uphill in the snow to get them, Babylon Steel would've been a trilogy in its own right. 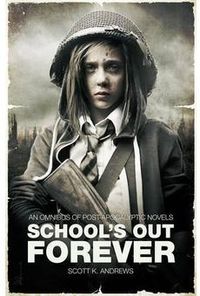 This is the Hunger Games for grown-ups: an isolated public (boarding, for fellow Americans and expats) school caught in a brutal, post-apocalyptic world. Students battle to survive - against one another, their teachers, their neighbours and other threats that are so wild that I don't want to give them away.

Contains disturbing themes, brutal violence and awfully big thoughts. Mr. Andrews does an astounding job of talking about violence - what it does the victims, the perpetrators and the witnesses. This isn't a jolly tale of survival against the odds, it is about the real cost of carrying on. However glib my opening sentence may seem, the School's Out series has a depth, a pathos and a sincerity that the Hunger Games never achieves.

The third book in the series, Children's Crusade, was a 2010 Kitschies nominee. At the time, we wrote that "there's no question that this is a bloody and violent story, but Andrews isn't writing escapist splatterpunk - he's using the horror of war to demonstrate, well... the horror of war. Action heroes that sleep well at night are sociopaths."

Mr. Andrews will be at Forbidden Planet from 6 - 7 pm tonight. He is one of the all-time great readers-of-things-out-loud, so this is not a thing to be missed.

The Kitschies present... Beukes, Miéville and Ness (next week!) 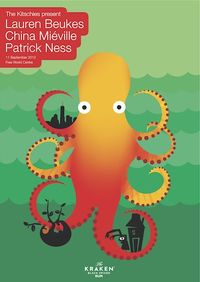 Mr. Miéville and Mr. Ness stole the show at the Edinburgh festival - next week's audience gets all that plus added Beukesness. Which spells success. Or complete apocalyptic chaos. Maybe both.

The event kicks off next Tuesday night at 6.30 pm. The details are on the Free Word Centre's website, including how to get there (hint: Farringdon or King's Cross) and ticket information.

There will be readings, a panel discussion and lots of opportunities to ask questions.

Thanks to the kind people at Blackwell's, there will be a vast array of books for shopping and signing purposes. Don't forget, this is Lauren's sole London appearance!

Plus, courtesy of our sponsor, The Kraken Rum, there will be inky, tasty beverages for the consumption, including heartily discounted cocktails.

And we've had some posters designed by Rona Marin Miller to celebrate the occasion. We're only printing a hundred of these, and they'll be on sale at the event, with the proceeds going towards the award (and future events). If there are any remaining, we'll a) be sad and b) sell them online.

We hope to see you there - it promises to be a truly tentacular sort of evening.

Posted by Pornokitsch in Stuff Happening, The Kitschies | Permalink | Comments (3) One does not simply travel from Oxford to Edinburgh to attend three book-related events over two days without a good explanation.

As is often the case, it began with a tweet. Patrick Ness mentioned on Twitter that he would be “chairing” China Miéville at an event in Edinburgh (cue hilarity) and also giving a - Polemic? I wasn’t clear on the details, but you don’t say (basically) KITSCHIES AWARD WINNERS NESS & MIEVILLE, TOGETHER LIVE ON STAGE ONE NIGHT ONLY and NOT get my attention. I quickly booked tickets for Ness’s polemic keynote on the afternoon of Monday 20 August, and the Miéville event, chaired by Ness, later that evening.

Then - quel drama! It was announced that the final Polemic of the Edinburgh World Writers’ Conference (I was only starting to realise that these polemics were part of a festival within a festival) would now be given by China Miéville, on the little topic of ONLY THE FUTURE OF THE FREAKIN’ NOVEL, YO. Reader, it was never an option for me to be sat on a train heading south during said polemic, so I got online and changed my tickets. Now I could stay in Edinburgh until 6:30 PM on Tuesday 21 August. Next up: a comic email missive of Sunday 19 August in which I blithely informed my partner that It Was Totally Fine, I would sit in Kings Cross Station between midnight and 5 AM before getting a train back to Oxford and going to work. I pressed Send and the phone rang. “YOU ARE NEVER, NOT EVER sitting in Kings Cross overnight. Get a hotel.” With some reluctance, I booked a hotel. (He was right. In This Instance.) The Ward isn't The Mall.

That seems a facile thing to write, but it is important - and, I think, the key to understanding and appreciating the second book from S.L. Grey.*

S.L. Grey's 2011 debut novel was so brilliant that it is hard not to draw comparisons: The Mall was an understandably memorable sort of horrific (in a good way - it is horror, after all) and approached the themes and tropes of horror in a new, deliberately 'meta' sort of way. As well as being a horror novel about capitalism - and being chased by monsters - it was a horror novel about horror, and what happens after the movie ends.

Further muddying the waters, The Ward and The Mall share a lot of superficial structural similarities (say that five times fast) and, as is rapidly revealed, a 'world'. I'll get into the latter in more detail.

But the differences between the two are critical. The Mall was a discussion of consumerism's grotesque underbelly, a world of shoppers and retailers taken to a hideous, Hogarthian extreme. The book enthusiastically tackled a mighty topic, but also one where there's very little right or wrong involved. S.L. Grey deftly avoided value judgements, but instead created the world's slimiest, slipperiest slope (and populated it with damp-breathed shambling monsters). Appropriately, The Mall was also populated with morally gray characters - flawed, weak human beings that were neither perfect nor imperfect, but merely ordinary folks stretched beyond their limits. They'd been fucked over by (real) society, and, during the course of The Mall, were introduced to a society even worse. (Or was it? Dun dun dun!) 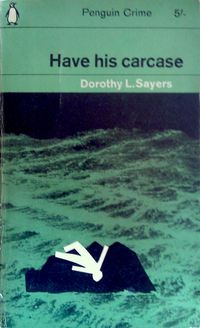 Type I: The Actual Serious Collections

Anne's been collecting Dorothy Sayers for as long as she can remember. Ditto, my collections of Robert Graves and John D. MacDonald. So finding new stuff - or at least, stuff we don't have, is always a good thing: