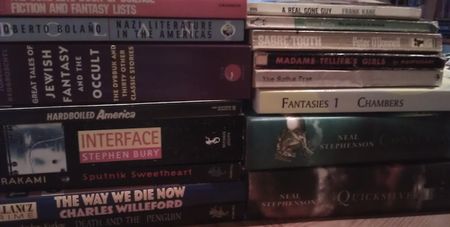 In no particular order...

I just finished my first book by Roberto Bolano (The Third Reich) and really enjoyed it (if enjoy is the right word - no idea what happened). Nazi Literature in the Americas looks properly, weirdly great.

Great Tales of Jewish Fantasy and the Occult is another quality find. Although I'm a little less excited now that I've studied the table of contents, and found that the 30-odd stories all stem from a handful of sources. Still, looks fun. 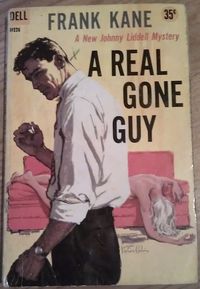 Charles Willeford, Frank Kane, Andrey Kurkov and Haruki Murakami are all amazeballs. The Krukov and Murakami books are both proofs, which makes them particularly good finds. Paws off the Murakami, hipsters. The Kane - a Johnny Liddell mystery - has the sort of Victor Kalin cover that makes modern paperbacks jealous.

Horace McCoy and the Maupassant paperbacks were also scrounged for their covers. Although, in the McCoy's case, I think he's one of the noir greats, and I haven't read No Pockets in a Shroud for ages (probably because last time I was depressed for a week afterwards.)

Speaking of which, Hardboiled America is already looking like a winner. As well as having a lot of really nice plates showing foxy vintage covers, the editor, Geoffrey O'Brien, includes a list of the 'essential' hardboiled books from 1929 - 1958. The previous owner left a series of tick marks on the side - I'm determined to top their score. Skimming through the actual contents, O'Brien seems lavish in his praise of Jim Thomas, David Goodis and John D. MacDonald. We can be friends.

The Complete Book of Science Fiction and Fantasy Lists is what happened in 1983, before there was an internet. I suspect that there were a lot of conventions in 1984 that had carefully copied counter-lists and many angry 'zines. For all I know, the conversation could still be going and the book is six votes from a Hugo... Anyway, as well as being a handy reference for awards and whatnot, it seems to have a lot of general silliness involved. A lot of Friday Five topics are going to be lifted from this little book.

We've got a couple 'collectible' versions of Quicksilver already, but no hardcovers). I've always known that getting the Baroque Cycle as first editions was inevitable, but put off the 'task' because they're a) really heavy and b) you have to clear a shelf for the fat bastards. I spotted the two books together for a reasonable price, figured it was a sign, and pounced. I explained all this to Anne, who looked perplexed: didn't I know the Baroque Cycle was a trilogy? So now I've got two doorstops in search of a third, equally ridiculous volume. Joy. (Stephen Bury's Interface - an early Neal Stephenson effort under a pen name - was a whopping pound, so I couldn't resist. No idea what to do with it, as we've already got a copy in storage somewhere.)

The Saliva Tree. Kim Newman mentioned it whilst holding court on the steampunk panel at FantasyCon. I was feeling smug that I'd read The Battle of Dorking and George Gissing and many of the other worthy works he mentioned, but then this threw me for a curve. Dammit. Anyway, now I can safely claim that at least one panel I've moderated has directly led to increased book sales.

Finally, the Coachwhip collection of some of Robert W. Chambers' short fiction. I knew this was out there, and was a little nervous about it. Given how much fun was had putting together Lost Souls, and how much I like Robert Chambers' Weird-er stuff, putting together a selection of his short fiction seems like a Jurassic inevitability. I'm pleased to say that the Coachwhip 'vision' ain't my own. There are no illustrations, comments, notes, introductions, anything - it is essentially the Project Gutenberg files downloaded and Lightning Source'd. Obviously, I tip my hat to the publisher's taste, but if you're going to collect and print something that's freely available, a wee bit of added value wouldn't go amiss. (And $14.95?!) Anyway, I'm feeling virtuous about the whole thing and have decided to keep the theoretical Chambers collection in our intangible production schedule.

(Incidentally, The Yellow Sign and Other Stories, a collection of Chambers' stories published by Chaosium. I don't wholly agree with the editor, S.T. Joshi's, appraisal of Mr. Chambers' ouevre, but the introduction is still a pretty terrific overview of Chambers' genre output and The Yellow Sign is a great selection of stories. (That's a book well worth $14.95 - and you can generally find it for considerably less.) I think the challenge for our Chambers collection will be to range a little further afield. Joshi limited himself (sensibly) to the overtly supernatural stuff. But Chambers has a few treasures lurking in other genres...