In September, we announced another new title - Speculative Fiction 2012. We'll be working with Justin Landon to select the year's 'best online criticism and reviews'. We're still on the prowl for your recommendations: blog posts, essays, book reviews and ramblings... Feel free to recommend your own work or someone else's, as long it is from 2012. (We've had a great response so far, but give us more, more!)

Also on the Panda front, our November titles are doing (knockonwood) really nicely. Simon Morden's Thy Kingdom Come is a proper post-apocalyptic masterpiece, and the new introductions by Mr. Morden and Robert Jackson Bennett are great. We've received all the art from Joey Hi-Fi (JOEY HI-FI) and it is... breath-taking. We're limiting this to 75 copies, print only. At the request of Mr. Morden, all proceeds for this book will go towards the Red Cross.

Meanwhile, back at the ranch, all the stories and 95% of the edits are in for A Town Called Pandemonium, and we're officially deeming the whole 'shared world / Weird Western' experiment a success. Some of the stories are overtly fantastic, some don't have any supernatural elements at all. All of them possess the sort of character-focused tension that we were dying to read. A portion of all proceeds from sales of 'Pandatown' will be going to the Arthur C. Clarke Award.

We've got launch dates for both books in late November and a launch par-tay (shindig? hoe-down?) planned for A Town Called Pandemonium. Per usual, the folks on our mailing list will launch invitations and the opportunity to pre-order before anyone else.

Finally on the Panda-front - with Stories of the Apocalypse going out of print (paper and digitally) on November 4th, we'll have some apocalyptic hoo-hah on the blog for the next few weeks, including guest posts from many of the contributors. We're going to miss it...

BUT ENOUGH OF THAT. How about some pretty books? 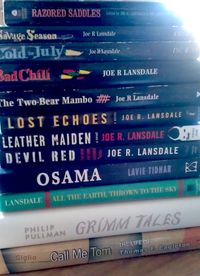 As you might be able to see on the right, I got pretty excited about the Joe R. Lansdale signing at Forbidden Planet. It was fun picking up some hardcovers at FantasyCon, but this? This was about quantity. I fell into my own 'signing etiquette' trap (try to buy as many books as you bring) - but given the selection of American paperbacks that FP had on display, that wasn't too hard to sort out.

I think the Hap Collins / Leonard Pine mysteries are my favourites of Mr. Lansdale's work, especially the earlier volumes like Bad Chili and Savage Season. All the Earth, Thrown to the Sky, Lost Echoes, Cold in July and Leather Maiden are all stand-alones: examples of his 'East Texas noir' than span almost three decades. Only Lost Echoes contains anything overtly supernatural, and even that is a bit understated, which works well for me.

Razored Saddles is, as far as I can tell, the original 'Weird Western' anthology. Unlike, say, A Town Called Pandemonium, it places its emphasis on the Weird - I actually think it is more historically significant as a collection of truly American steampunk rather than revisionist, fantastic Westerns. Whatever it is, the book is a whole lot of fun, and I was glad to get it signed.

Also sneaking into the stack: a proof copy of Lavie Tidhar's Osama. According to Lavie, there aren't many of these. And after a bit of a bidding war on eBay (I'm pretty sure I was wrestling with Lavie and Kameron Hurley?! The Kitschies take care of their own, I guess...), I wound up the victor. Mine.

Call Me Tom is a biography of Thomas Eagleton, one of the greats - and a fellow Missourian. I'm really excited about this for all sorts of personal and pseudo-intellectual reasons. And, finally, Philip Pullman's Grimm Tales, in which he goes all Robert Graves on fairytales. I knew I wanted it, but then I saw the cover and fell madly in love. Plus, Forbidden Planet are carrying signed copies... 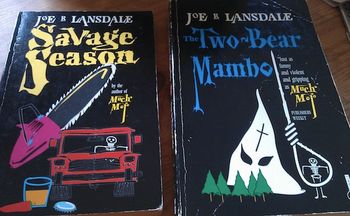 Joe R. Lansdale has had some gorgeous covers (including a Peter Mendelsund Sunset and Sawdust), but, to me, he'll always be associated with these trippy Indigo/Gollancz paperbacks designed by Gary Day-Ellison. They're sort of properly bonkers - emphasising the surreal nature of the Collins/Pine mysteries; colourful yet sinister. My copies are looking pretty well-loved...