Justin and I are still taking recommendations for Speculative Fiction 2012: The Best Online Reviews, Essays and Commentary... but the deadline is tomorrow.

Use the form and tell us your favourite reviews, essays, rants, raves and commentary from any aspect of geeky culture. It can be your own, someone else's, whatever - it just needs to be from a non-professional publication/site and first published in 2012.

Have a think and share the link! (Sounds a bit like a government anti-drug campaign, doesn't? Just say no... to crappy reviews.)

If you're on the Pandemonium Fiction mailing list, you would've received a link for your copy of the Stocking Stuffer - our annual collection of bonkers short-short stories - on Christmas Day. If you're not on the mailing list, we still love you (just a week or so less).

Here's a sneak peek with our introduction, "Crime and Merriment". 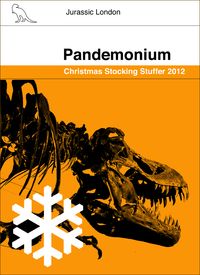 My, how time flies.

A year ago, we released the first Stocking Stuffer. The festive chapbook had a ‘darkly humorous’ theme – three fantasy stories with a twist. It was our second-ever book, with our first, Stories of the Apocalypse, having been released the month before.

This year’s Stocking Stuffer is our twelfth book. Counting Apocalypse, (which is now out of print), we’ve published four anthologies, four chapbooks, three novelettes and one beautiful novel.

2013 will be even bigger. We have two anthologies in the pipeline: The Lowest Heaven (coming this spring, with the Royal Observatory Greenwich) and The Book of the Dead (coming in fall, with the Egypt Exploration Society). The start of the year also includes the long-awaited ‘Cafe de Paris’ edition of A Town Called Pandemonium and the publication of Speculative Fiction 2012, a collection of the year’s best online reviews and commentary, co-edited by Justin Landon.

Three new novelettes are scheduled as well: Archie Black’s ‘Uncle Smoke’, Will Hill’s ‘The Sad Tale of the Deakins Boys’ and Adrian Tchaikovsky and Janine Ashbless’s ‘Reading Between the Lines’. Archie’s and Will’s novelettes will come with exclusive new content, and Adrian and Janine’s book will be its first publication anywhere.

Our chapbook series will continue with 1853 in January, as well as companion volumes to both the new anthologies. Plus, of course, next year’s Stocking Stuffer... and then 2014.

That’s going to be really big.

The spectacular Vincent Sammy is a finalist for This is Horror's Best Artist 2012.

We're a bit obsessed with his work (have you seen Something Wicked?!), but wanted everyone else to have the chance to gawk at his artistic majesty as well.

Lost Souls, containing 21 lovely stories and six spectacular illustrations by Vincent Sammy, is now on sale for ridiculously cheap - a mere £1.99 on Amazon and Kobo. 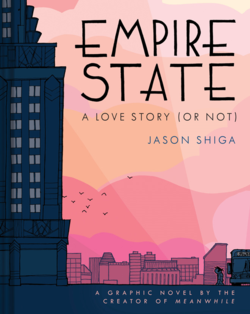 Jimmy, the protagonist of Empire State, is a bit of a sad sack.

He works in the Oakland library during the day and spends his evenings adding more animated gifs to his website. He's not a geek because he has no passions - his life is boring, repetitive and unfulfilling. In one telling scene, he explains how the "Walk" button doesn't work at a particular intersection, because he spent all day timing the light changes.

By contrast, his friend Sara is bubbling over with life. She's only in Oakland temporarily - capital-L-Life is in New York City, where she can break in to publishing and be at the center of the creative universe. During her brief stint in Oakland she opens Jimmy's eyes - poking and prodding him to break out of his routing. She introduces him to cappuccino and checking accounts and the other niceties of 21st century life.

Sara inevitably heads to New York and Life, leaving Jimmy with an absence in his life the exact size of a perky Jewish hipster. After some agonising, he makes his first ever impulsive decision: he's going to move to New York City. Because he, Jimmy, is in love.

Nothing too saucy, but we were doing some cleaning, and thought we'd capture shots of a few of the more unconventionally beautiful books on our shelves.

What eclectic treasures do you have lurking on your bookcases? Please share! 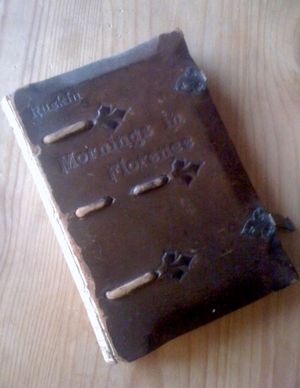 John Ruskin's Mornings in Florence - Bernard Tauchnitz, Leipzig (1907). This has a crazy cover with etched leather and (broken) metal clasps. I'm a little disappointed that it isn't a bit Ye Olde Demonologie, but I suppose Ruskin rambling about art is a close second.

In the Quarter by Robert W. Chambers 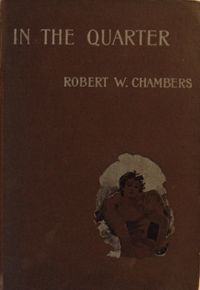 Assuredly only of interest to me, but the sort of thing I truly love.

My holiday present to myself (what, you don't do that?) was a copy of Robert W. Chambers' In the Quarter. It'd be lurking on eBay for a little while and when the seller dropped the price, I was in like a flash; fighting off the hordes of other Chambers fans to pick up this little treasure (bids: 1).

First published in 1894, In the Quarter is Chambers' debut work. I'm just reading it now, but, so far, this review seems to have it down - "pretty well done, but characteristically melodramatic". Chambers never really outgrew melodrama and, in this case, it is additionally infused with a hearty dose of Young Author Angst. It isn't all roses and confectionary (unlike, say, The Green Mouse) and, as Chambers was a young Parisian art student himself, his writing isn't wholly inauthentic. (I've not stumbled on the rampant anti-semitism yet, but am fully prepared to be greatly disappointed in him.)

Continue reading "In the Quarter by Robert W. Chambers" » 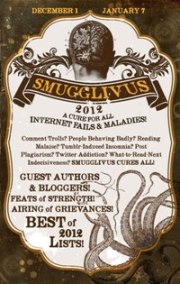 We're taking part in The Book Smugglers' Smugglivus again this year - their annual guest-blog-a-thon with some great authors, bloggers and, er, us.

The theme is ostensibly 'great reads of 2012', but, as usual, we went pretty far off-piste. I listed my favourite non-2012 reads of 2012 and Anne's highlighted some of the year's great moments in geek culture.

Hopefully there are a few surprises on both lists...

Enjoy! And a festive Smugglivus to you all! 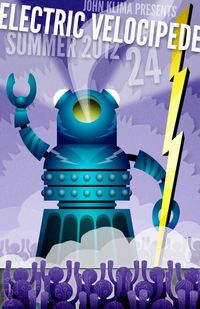 Since an early age, I've always thought of reading speculative fiction as setting off on an expedition. I'd peel off the pages (or, in this case, tap the screen of my phone) and stare wide-eyed into lands outside possible realities. The setting would rush at me with intense, vivid imagery, the sounds of off-kilter cultures would swarm and swallow me, and the sentences would coil and arrest me in my place.

The first books I read, I used to re-enact in my mind. The stories would serve as stepping stones for my own imagination, and I'd picture myself as the hero of my own tale, stepping outside the lines the author had written.

Electric Velocipede #24 brings me the same sense as these first experiences with fiction - a collective of immersive landscapes that all, to some degree, draw me in.

In one sense, the stories are also united by their low-key approach. Even the boldest effort in the issue, “To Dive Into a Godling, Where Life Begins” by Jacques Barcia, has more to do with the personal implications of a character finding the "Ground Zero" - where reality became undone - rather than the greater significance of the discovery.

You have to be a fearless reader to jump into this story, because its very concept relies on you handling the antithesis of reality. At the beginning I couldn't exactly connect with where it took me, as it mainly contained maritime undertones and the (very technical) fishing for singularities. With the story's progression, more of the society revealed itself, including a subspecies of humans, the mules, which have a connection with the singularities and the Ground Zero. Although the narrative indulges with the bizarre, I adore this piece.

Pandemonium is a lonely place...

The introduction to A Town Called Pandemonium. 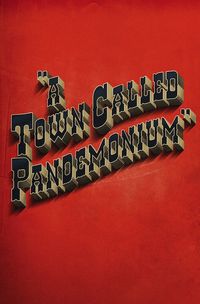 Pandemonium is a lonely place.

The town sits in the emptiness of the New Mexico Territory. If you wanted to visit – perhaps to make a deal with cattle baron Representation Calhoun, or conduct a different sort of transaction in the bordello of Waterloo Jones – it could be quite a memorable journey. The town is surrounded by ravines, mountains and an inhospitable desert. There’s no train, and the intermittent stagecoach guarantees only an uncomfortable passage.

Nor is Pandemonium’s isolation solely a matter of geography. In this slightly alternative history, the town has some unusual neighbors. The Anasazi still rule all their ancestral lands, uncommunicative and concerned only with their own unfathomable goals. The new state of Deseret sits to the north, its founding fathers looking hungrily at the unoccupied land of the New Mexico Territory.

For the residents of Pandemonium, however, this seclusion can be a blessing. This is a dying town, filled with the foolish, the reckless, the outcast, the hopeful and the truly desperate. From the sheriff to the undertaker’s wife, everyone has a secret. With the silver boom in the town’s past, these secrets weigh more heavily than ever before.

In Sam Sykes’ “Wish for a Gun” a lonely widower finds his heart’s desire buried right by his front door. The Deakins boys, from Will Hill’s aptly-named tale, also find something deep underground, something both extraordinary and horrible.

Both Archie Black’s “4.52 to Pandemonium” and Sam Wilson’s “Rhod the Killer” feature ostensible innocents. But they too are revealed as more what they seem, and may God have mercy on those unlucky folk who cross the paths of Rhodri Anwell and Mrs. Philpott.

The title character of Chrysanthy Balis’ “Belle Deeds” has her secret lust and, later, shame. Chrissie Miller discovers what happens behind closed doors in Den Patrick’s “Red Hot Hate”. While Osgood Vance’s “Sleep in Fire” and Scott K. Andrews’ “Grit” both feature men wrestling with their personal demons, Joseph D’Lacey’s hero struggles with an entire hidden history – and terrifying future. Dark deeds and darker secrets: Pandemonium is awash in them, and Jonathan Oliver’s “Raise the Beam High” explores the consequences of revelation. What happens when that which has been hidden is brought to light?

The stories of A Town Called Pandemonium – be they macabre, funny, dark or droll – are all linked together by the spectacular artwork of Adam Hill, who has given this played-out boom-town a whole new lease on life.

A Town Called Pandemonium is available through Blackwell's or the Pandemonium website. You can also find it in the Kindle (US and UK) and Kobo stores. 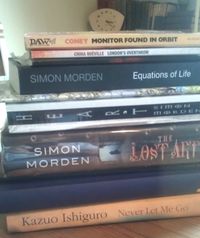 Honestly, guv, I haven't been buying books lately. They just fell into my pockets. I don't even know where they came from!

This latest stack of books is pretty much attuned 100% to me. Everything here is Type I or II - either part of an actual collection or becoming very, very close to one.

Michael Coney's Monitor Found in Orbit is a gift (or perhaps a loan-that-may-never-be-returned) from Mark Charan Newton, who cites Coney as a huge influence. I'm only a couple stories in, but I'm seeing the parallel. Sneaky, socially-conscious SF. It is a bit more one-twist, Golden Age magaziney than I normally read, but I like it so far. Plus, DAW paperbacks are definiteily a Type II collection. Especially with Kelly Freas art.*

*Fun fact! I once bought some scraps of Freas art at an auction - literally, just doodles and scrawls and whatnot. I had a mad scheme of identifying what book the art connected to, putting it all together, etc. Two problems: Freas illustrated a billion books and in detail, they're all kind of identical. Oh well.