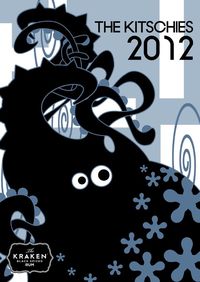 Six of the finalists have now been reviewed, with four more on their way. Have a look at what others think about this year's Kitschies shortlist.

Agree? Disagree? Let the reviewers know what you think!

"Bullington has a gift for dynamic description which invokes all of the senses to woo the reader, willingly or unwillingly, into his world." - Elloise Hopkins (British Fantasy Society) on The Folly of the World

"Harkaway asks a lot from his readers in terms of trusting him to make sense of his squalling, bonkers opening salvos, and always fulfils his promises." - David Barnett on Angelmaker

"This is a wide-ranging, engaging tale that plays fast and loose with a number of conventions. It’s less Space Opera and more Chivalry in Orbit. Seemingly against the odds, a most improbable love story is beautifully rendered..." - Penny Schenk on Jack Glass

(All the Red Tentacle reviews.)

"There are fascinating things here in what is implied about families here – notably the relationship between Amy and her artificial-humanoid mother and human father and between her and Portia, the predatory grandmother. There’s also a skilful creepiness." - Andy Sawyer (BSFA) on vN

"In outline, Seraphina sounds like the fluffiest story imaginable: it’s about a precociously talented teenage girl with a Secret Heritage, Special Powers, and a kindly, eccentric dragon for an uncle. It contains characters with names like Queen Lavonda and Princess Glisselda. And look: here’s a brooding young love interest hoving into view! And yet: despite all this, Hartman’s novel turns out to be one of the most elegant and absorbing fantasy debuts in some years." - Nic Clarke (SFX) on Seraphina

"There is bravery in the writing, as the novel portrays young characters as people, with wholly formed motivations and independent story-arcs. Tom Pollock obviously does not subscribe to the idea that teens need to be pandered to, or talked-down to – there is respect for both his intended young reader audience as well as for the youthful characters themselves." - The Book Smugglers on The City's Son

Posted by Pornokitsch in The Kitschies | Permalink