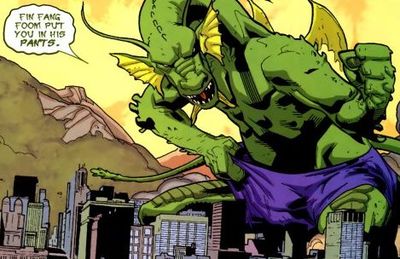 I swear, we do this every year. But... with Storytelling Without Limits (April 30, Brixton Ritzy, tickets here), I've got yet another excuse to list my favourite comic books by Warren Ellis.

4. Nextwave: Agents of H.A.T.E. (Marvel): "It's an absolute distillation of the superhero genre. No plot lines, characters, emotions, nothing whatsoever. It's people posing in the street for no good reason. It is people getting kicked, and then exploding. It is a pure comic book, and I will fight anyone who says otherwise. And afterwards, they will explode." - Warren Ellis (Heroes Con 2006). Also, drop bears.

3. Transmetropolitan (Vertigo). Spider Jerusalem is Hunter S. Thompson crossed with Bruce Sterling by way of a feral badger. He's one of the greatest characters in comics full stop - a vigilante 'hero' that fights with words, activism and the occasional blast of the bowel disruptor.

Amongst other things, Transmetropolitan is masterful series writing. Everything matters from the first issue to the last - there are amazing plot arcs, an overarching theme and a brilliant resolution.

2. Planetary (Wildstorm). Ellis writes a lot episodic explorations - where each issue takes a nifty idea and pokes at it with the pointy end of the idea stick. Individual storylines range from James Bond to Kaiju. The monster-of-the-month format is balanced with a strong overarching plot: a lengthy deconstruction of traditional superhero sagas.

Best of all, Planetary is optimistic. For every 'grim meathook future' threatened, there's a moment of sheer, fascinating joy, where the characters take a moment to step back and revel in the amazingness of the world. It isn't breaking the fourth wall as much as inviting us in - Planetary is, in many ways, a diary of wouldn't it be awesome?

1. Fell (Image). My favourite comic book ever, and given two pints and room to stretch, I bet I could make a lot of arguments that involve the word "best" as well.

The Ben Templesmith/Warren Ellis pairing is one of those once-in-a-generation meeting of creative minds that results in absolute perfection (see also: From Hell). Part police procedural, part manifesto, Fell is dark, hilarious and wonderfully awful.

Which is your favourite?

I swear, we do this every year. But... with Storytelling Without Limits (April 30, Brixton Ritzy, tickets here), I've got yet another excuse to list my favourite comic books by Warren Ellis.