Baxter Zevcenko is your average 16-year-old-boy. If by average you mean kingpin of a smut-peddling schoolyard syndicate, and a possible serial killer who suffers from weird historical dreams. He’s the first to admit that he’s not a nice guy, but then, in high school, where’s the percentage in being nice?

That is until his girlfriend, Esme, is kidnapped and all the clues point toward strange forces at work. Faced with navigating the increasingly bizarre landscape of Cape Town’s supernatural underworld to get her back, Baxter turns to the only person drunk enough to help: bearded, booze-soaked, supernatural bounty hunter, Jackson “Jackie” Ronin.

I've been a fan of Charlie Human's bizarro-poignant (new word!) sense of humour since we first laid eyes on his work. His debut novel, Apocalypse Now Now, was picked up by Random House last May and I've been impatiently awaiting this novel for aaaaages. August can't come a day too soon...

As if Charlie's writing weren't already exciting enough, Apocalypse Now Now boasts not one, but two Joey Hi-Fi covers - one for the UK edition, one for South Africa. We caught up with the man himself to ask very serious questions about what goes into two extraordinarily apocodelicious covers... (another new word! I'm on a roll!) 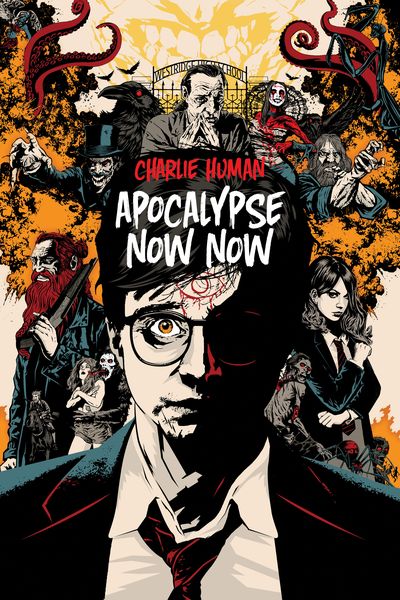 Pornokitsch: So - the contents of Apocalypse Now Now are a (frustratingly) closely guarded secret. As one of the few that have read it - what's the book like?!

Joey Hi-Fi: It's insane. The good insane tough. Although it did make me worry about Charlie Human's mental state. Lauren Beukes did a great shout for the book -“Mad, dark, irreverent and wonderfully twisted in all the right ways". I think that sums it up quite well.

PK: For Apocalypse Now Now, you've made two (gorgeous) covers that are almost totally different. First, why are there different covers for the different markets?

JHF: Thank you. Initially Charlie Human asked me If I'd be interested in doing both the UK & South African covers for his new book. Random House UK and Umuzi (Random House Struik) then contacted me separately and commissioned covers. It's obviously not uncommon for a book to have different covers for the UK and South African markets. I've found publishers tend to know what works best in their local markets - thus the differences.

Doing two covers for the same book is a first for for me - and a unique challenge. So I couldn't resist.

The task of then creating, what would hopefully be, two equally as awesome covers for the same book gave me a few sleepless nights. I took to calling it the 'Apocalypse wow wow conundrum'.

PK: How's it work? Did the two publishers request very different things or have specific needs?

JHF: Not really. The briefs were very open. The only given was that the covers needed to be different in some way. I was left to choose what I thought worked best.

In fact, Random House UK had no idea what the South African cover looked like (and vice versa) until I was done.

I designed and illustrated the UK cover first - then started on the South African one. But I already knew how each cover would work and how they would differ from each other.

Since I was working from the same source material - I suggested that I would like to work from one strong concept - but produce two different executions. I liked the idea of the two covers having a visual and conceptual connection, with each representing a different facet of the book in a subtle way. Much like chief protagonist's (Baxter) personality...

After reading the book I had a basic idea of the concept, design direction and aesthetic I thought could work well.

I took quite a few cues from the word 'apocalypse' in the title. I wanted both covers to be full of the bizarre apocalyptic imagery described in the book, so when looking at the cover you could get a visual glimpse of the insanity that lie within! The only way I could do that was through illustration.

In addition to the above - there is the protagonist's internal struggle with his darker self.

So I wanted to combine these two ideas on both of the covers: Baxter's struggle combined with apocalyptic imagery from the book.

I'm a great admirer of the Alamo Drafthouse and Mondo Film Posters. I thought in the case of Apocalypse Now Now - brimful of supernatural & apocalyptic themed imagery- that a kind film poster style approach could work well.

Since I was doing the UK cover first - I pitched the idea to Jack Fogg at Random House UK along with some visual reference). We looked at the posters for Apocalypse Now, Return of the Jedi & the Mondo poster for Sucker Punch as rough examples. He loved it. Charlie loved it. And I began work. 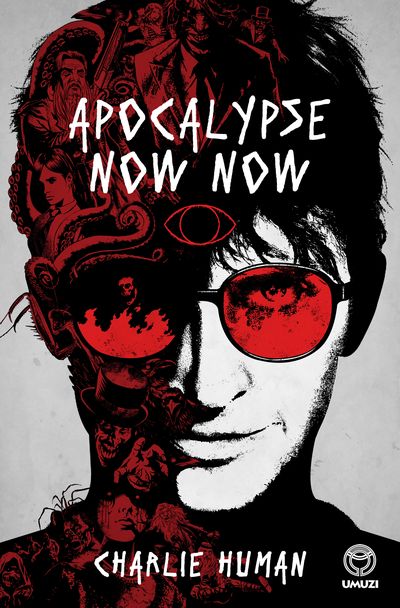 PK: For the South African edition, all the action is in Baxter's head - and he seems more confident. In the UK, everything's happening externally and he's looking a less self-possessed. Why did you select these two approaches? Are they two sides of the same book? Or two very different visions?

JHF: I'd say two sides of the same book. Both covers show a different side of Baxter's character.

In the book, Baxter experiences these vivid apocalyptic visions. So for the UK cover I chose to focus more on that. I thought illustrating Baxter in the midst of one his visions would be interesting. Thus his manic wide-eyed expression and the mix of bizarre and macabre imagery surrounding him. There is also a hint of his darker personality - with one side of his face bathed in shadow.

For the South African cover I chose to focus on Baxter's internal struggle with his darker personality. Thus the imagery is contained within his head - but on the side bathed in shadow.

PK: Why in god's name did you put a spider on his shoulder? Now I can't sleep at night.

JHF: You'll have to read the book to get and answer to that. But be forewarned - spiders aren't the most creepy thing in the book. Not by a long way.

PK: Why did you choose the colour palette(s) you did? The UK is more colourful, South Africa's more stark.

JHF: For both covers I worked from an 'apocalypse' themed colour palette. Mostly Yellows, oranges & reds. But since the two covers needed to be different - I couldn't use the same colours on both. Thus the colour palettes were in part determined by the two different layouts.

PK: Is this an accurate reflection of what high school is like in Cape Town?

JHF: You'll have to ask Charlie that. My memories of high school stem from the 90s! So I'm not sure. Perhaps in 2013 there are supernatural horrors peering out from the shadows of high school hallways in South Africa? I hope not though. Our South African youth have enough to deal with.

PK: How do you balance a book that's about a high school student with the fact that it isn't a children's book? How much does the age of the audience impact what you do?

JHF: It is a bit challenging. But I try not to think about the age of the audience too much. Covers in the Young Adult genre tend to have a VERY particular look (i.e. photo of angsty teen posing on cover). So you'd have to go out of your way to stray into that genre in terms of cover design.

I generally look for the book's tone and try to represent that in a visual way on the cover.

PK: I'm not... particularly artistically capable. So in layman's terms, how exactly do you do what you do? I'm assuming you capture a tentacle monster, take a photograph with your phone and then run it through the Hi-FiLter(tm) app? Or is it more complicated than that?

JHF: You've rumbled me sir. I have a menagerie of bizarre creatures and artifacts locked away in a spare room within my sanctum. Getting a tentacled beast to remain still while you draw it, is a challenge! (You will need a hypnosis wheel, chair and whip).

To seriously answer your question though - I use a combination of different techniques. Some hand drawn - some drawn in Photoshop. For Apocalypse Now Now I used different techniques for each cover. I wanted the UK cover to be more 'cleaner' in terms of line work and detail. The South African cover is a bit rougher with some of the original shading/pencil marks visible. For both covers I illustrated the various elements separately and then assembled the layout in Photoshop - where I work over the original drawings.

PK: What do you like best about the UK cover? And about the SA one? Or is that just cruel?

JHF: Can I plead the 5th please?

PK: Speed round! Best film set in a high school?

PK: Yes. It really is. Ok, worst subject in school?
JHF: Maths. I bit my thumb at thee.

PK: How do you take your coffee?
JHF: I drink tea.

PK: Hmm. I'm not sure about that last one either, but I guess if you're used to wrangling tentacle monsters, raptors probably aren't too big a worry.

Thank you very much for your time (and amazing covers!).

Baxter Zevcenko is your average 16-year-old-boy. If by average you mean kingpin of a smut-peddling schoolyard syndicate, and a possible serial killer who suffers from weird historical dreams. He’s the first to admit that he’s not a nice guy, but then, in high school, where’s the percentage in being nice?

That is until his girlfriend, Esme, is kidnapped and all the clues point toward strange forces at work. Faced with navigating the increasingly bizarre landscape of Cape Town’s supernatural underworld to get her back, Baxter turns to the only person drunk enough to help: bearded, booze-soaked, supernatural bounty hunter, Jackson “Jackie” Ronin.

I've been a fan of Charlie Human's bizarro-poignant (new word!) sense of humour since we first laid eyes on his work. His debut novel, Apocalypse Now Now, was picked up by Random House last May and I've been impatiently awaiting this novel for aaaaages. August can't come a day too soon...