This follows on from a post two weeks ago, thinking about purchasing and reading behaviour by format. This is also the 'conclusion' to a year of wibbling about book collecting. Apologies as this post - in fact, the whole year - is pretty self-indulgent. But I've enjoyed it a lot, and I hope you have too.

Thanks to the miracle that is Goodreads, I know exactly how many books I read in 2013 (well, the first 11.5 months thereof). And, thanks to my Kindle and a Collectorz catalogue, I also know how many books I've bought in 2013.

There are also three biggish holes in the data:

Fascinating. So, how'd this all work out, and more importantly, what does it actually mean? Read on for a (very) long post in which I take my personal, flawed data and draw sweeping conclusions about the future of publishing!

Fascinating, although not particularly informative, except that, good god, a lot of books come through our home (a side effect to having 1.5 jobs in publishing between the two of us). Other, by the way, is that 'comic book' stuff that I'd noted above, as well as some non-fiction research: pamphlets, work stuff, odds and ends.

Paperback as a format includes 'proofs and ARCs', which, again, given the editor/blogger combination that makes up our household, means a lot of books. [We don't get many review copies digitally - nor am I on Netgalley. Of the 147 ebooks, almost exactly half (79) are Kindle purchases, 60ish are from archive.org and a dozen are review copies and/or manuscripts. ]

I was genuinely surprised to see that I'd read so many hardcovers, so I looked a little deeper. The majority of the 32 are from January - back when I was still reading 2012 Kitschies submissions. For the remaining 11 months, my hardcover reading was mostly 'appointment to buy' stuff: books from my favourite authors (e.g. The Crane Wife, More Than This, and a few others that maybe aren't by Patrick Ness.)

When you plot them together, it comes apparent that, for ebooks and paperbacks, there's a high read/received ratio. For hardcovers, however, I'm hoarding - not reading. The chart below makes this painfully clear: 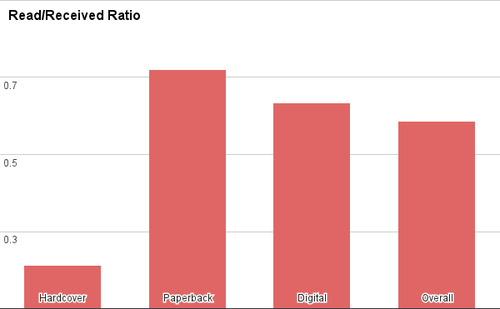 Hardcovers, as expected, are treated as objects, not texts. And ebooks are the reverse - I mean, why else would I have an ebook if not to read it? It ain't like they're pretty. However, I think I underestimated how perfectly positioned paperbacks are in my 'sweet spot'. Because of review copies/ARCs, I'm reading a lot of new books that I'm keen on in paperback. And even when I buy vintage paperbacks to appreciate as objects, I still wind up reading the text.

Of course, the big flaw in all this data is that this isn't a finite set of books: not everything I read in 2013 was received in 2013. I read books that I picked up in previous years. And I will eventually read books that I've received in 2013, but haven't gotten around to yet. It'd be cleaner if this were a closed set - that way I could say things like 'I read over 70% of the paperbacks I received'. But I didn't. Instead, this is a ratio of two things that, I'm sad to say, don't actually have much to do with one another.

Still... the trend is what I was looking for, and even if the numbers are only for indicative purposes, they're still surprisingly extreme. The 985th disclaimer here is that I'm not exactly an exemplar reader: either in terms of what I read or in what books I have. There's a pretty small behavioural segment of vintage-trash-obsessed lunatics that get regular genre review copies (Nick, maybe - or Lavie Tidhar!). I think the learning is personal - which brings me back full circle to one of this year's earlier posts on book collecting, in which I waffled on about hierarchies of value, and how they're ultimately relative.

What do I value in a book?

Based on the data, I've got a surprisingly polarised response:

I want a text.

I want an object.

And I don't mind if they come separately. In fact, I seem to prefer it.

[Currently paperbacks are in the text category, but, as noted above, I think 'paperback' is an overly generalised congregation. Plus, more than any other category it has flawed data - the review copies I don't keep and the books that get read-and-dumped in a short period of time would both primarily come as paperbacks. I also see the United States of Paperbacks as a temporary union. It won't be long before all my review copies are digital, and the only paperbacks I purchase are for collecting. So, let's keep them aside for now.]

The object / text dichotomy is a wonderful representation of intrinsic versus instrumental value (because what this blog post needed was more Plato).

For me, Hardcovers have intrinsic value. They are what they are: beautiful items with historical/cultural/personal significance and a combination of craftsmanship and rarity. I appreciate them for what they are. Dewey's arguments about relative intrinsic value are particularly apt here as well - the value of these books comes from me [personally] and society [as collectors' items - the 'worth' of which may change at any time].

Meanwhile, ebooks are pure instrumental value. Utterly worthless as objects, the value of an ebook is in the text contains. Case in point: my ereader is responsive. I can make the text larger or smaller, I can turn the thing on its side and the book adapts accordingly. Certainly there's a nice design ethos in there, but only in the sense of design as user experience. The value of an ebook is in how it delivers the story. It is a loosely-bounded mass of words; a wriggling package of escapism eels, caught in an XML bucket. This also backs into a larger issue, one of piracy: the pirate's defense is that they're copying a book, not taking it. By the laws of supply and demand, since they're not reducing supply, they're not actually taking anything. But this supposes that the ebook has intrinsic value. It doesn't - you buy an ebook because you're buying access to the experience behind the code. The purchase price doesn't get you ownership of a tangible noun.

[Unfortunately, this misunderstanding of the source of an ebook's value is endemic through the system: I think it leads to discussion of DRM (on both sides), Amazon's rent-not-buy T&Cs and, hell, even the 'do you write for exposure?' argument. But I'm not going there. Now. Or, probably, ever.]

On the other end of the scale, you have the question of physical books. If we have a market (again, based on a quantitative study of one person) that's moving towards objects of intrinsic value... what can you do to a book to increase its intrinsic value and make it more desirable? There are a few common tricks already in place with big publishers and retailers (Waterstone's Edition with Dipped Edges and Ribbon Bookmark anyone?), but they're most about adding production quality: making the same soup with more expensive ingredients. On the other hand, if you start looking at small presses, added intrinsic value is everywhere (see: Centipede).

Anne and I have always used Jurassic as a sandbox for tinkering with intrinsic value - although, to be fair, I'd never thought about it in these terms until now.

That list goes from the commonplace to the bonkers (and I do think The Book of the Dead was a little extreme), and demonstrates that this is a huge area to play in. As a publisher, when I'm putting an anthology together and I want to add instrumental value, there's only one way at it: get better stories. If I want to add intrinsic value - specifically for people who share the same (relative) appreciation of intrinsic value - the sky's the limit. [And not even that: we actually investigated getting books into space for The Lowest Heaven. No lie.] It seems that, as a publisher (even a tiny one), I had accidentally stumbled on the model that I'm just now realising that I follow as a reader.

THE FUTURE IS HERE AND IT USES LATIN

Is this then the future? Genus "book" diverging into two different species? Libellos legero, delivered in pill form. And Libellos ars, the book as art, prepared in accordance with elaborate and unrepeatable rituals?

The future of the book is something many people have wibbled about at even greater length, and, as noted repeatedly, I'm extrapolating wildly from pseudo-scientific research into one test subject: myself. But, after a year of navel gazing - studying the books coming in and the books coming out, it is  difficult to see any other pattern on the horizon. Would ultra-cheap paperbacks make a difference at this point? Not really - digital will still be cheaper, and I still don't have the room. On the other end of the scale, what about enhanced ebooks? Again, I don't see it making a difference. The instrumental value of a book is in reading it: adding video content and social media streams to a text doesn't add intrinsic value, it just diminishes the instrumental.

I'm sure there are other possibilities that haven't yet sprung to mind, but, for now, for me, I've realised that what I think of as a 'book' is actually two very different, very discrete things, often, but not always, sharing the same space.

This follows on from a post two weeks ago, thinking about purchasing and reading behaviour by format. This is also the 'conclusion' to a year of wibbling about book collecting. Apologies as this post - in fact, the whole year - is pretty self-indulgent. But I've enjoyed it a lot, and I hope you have too.

Thanks to the miracle that is Goodreads, I know exactly how many books I read in 2013 (well, the first 11.5 months thereof). And, thanks to my Kindle and a Collectorz catalogue, I also know how many books I've bought in 2013.

There are also three biggish holes in the data:

Fascinating. So, how'd this all work out, and more importantly, what does it actually mean? Read on for a (very) long post in which I take my personal, flawed data and draw sweeping conclusions about the future of publishing!