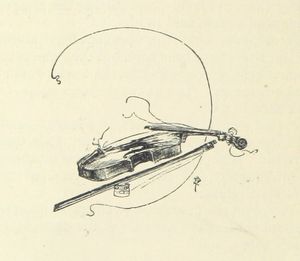 “I lost. To a ten-year old.” Lili finished the whisky and slammed the empty glass down, making the ice cubes rattle. “It’s just not right! They read the contract, they know what they’re in for. Then we have to let them off because the boss downstairs says it’s ‘traditional’.” She sighed. “And then there was last week.”

“You must have heard about it.”

“He didn’t even have to pick up his violin. It was clear I’d already lost.”

“Is it true that all the dogs in the town ran away when you started to play?” Amy stifled a most undemonic giggle.

“Probably. I reckon that rumour about all the cattle dying in their fields is false, though. Oh, hey. Hey, don’t laugh. It’s not funny. It’s okay for you, your mother was a Siren. You’ve got musical whatdyacallit.”

“I think there’s someone you should meet. Someone special.”

Sheltering in the shadow of a derelict barn, Lili scuffed her boots in the sand at the intersection of Liberty and Fifth.

Of course, the names didn’t matter. She was here, therefore this was The Crossroads.

A figure was approaching, just visible in the early morning gloom. A redhead in a sundress, cold enough to clutch pale arms around her thin frame but not sensible enough to have brought a jacket. Either that, or she was beyond caring.

Air of quiet desperation? Check. No sensible reason to be out on a night like this at a time like this? Ditto. This had to be Amy’s ‘someone special’. The girl seemed an easy mark. Why hadn’t Amy just signed this one up herself?

Lili considered her options for an entrance. Emerge from the shadows, or appear in a puff of brimstone? Maybe she could go the Cheshire cat route, send her voice and –

The girl gave a timid wave. “Are you Lilith?”

“Georgia. Pleased to meet you! Your friend told me where to find you; she said that you could help with a problem I’m having?”

Lili laughed. “You just come right out with it, don’t you? No foreplay or anything.” Foreplay. Unwise choice of a word. Lili wanted to reach for her hipflask. Redheads were her type and Amy knew it. Was that what this was about?

“You’ve got a problem no one else can solve. You’ve tried everything. You came to the Roadhouse, got talking to Amy, who offered a smile and a sympathetic ear. She bought you a few drinks and she told you I could help. You’re not the first. So spill – what is it?”

“Your friend was much less aggressive, you know.”

“Yeah, she’s a regular good Samaritan. But you’re stuck with me. Tell me all about it, honey.”

“Well . . . it was my girlfriend. We were together for five years, planning marriage, even talking about adopting a kid, but then –”

“She died. Don’t interrupt.” There was something slightly schoolmarmish about Georgia, Lili decided. “And I loved her, but when she was in the hospital she told me she wanted me to move on, and I promised her, I actually promised, but I just haven’t been able to find someone since. I’ve tried, I’ve really tried and – look, are you even listening?”

Lili was rummaged through the pockets of her leather jacket. “No, go on, I’m listening, honest. Tell me more about your… Ah! Here it is.” She brought out a yellowing piece of parchment, and with an uncanny flick of the wrist she let it go. It fluttered, suspended, in mid-air. There was a lot of text crammed onto the paper, small, neat and somehow arcane. “Impressive, huh?”

“Floating paper. Yes, that must come in real useful when – no, I can’t think of a single time when that would come in useful. Your friend’s ability to hypnotise the barman seemed much more practical.”

“And yet she always makes me buy drinks.” Lili’s hand went in her pocket again, this time bringing out what might look like a simple fountain pen, if not for the too-sharp nib glinting evilly in the moonlight.

Quick as a snake, Lili scraped the shining nib across Georgia’s pale upper arm. There was, at the very, very edge of mortal hearing, a small slurping sound, and the pen came away bloody.

Lili handed her the pen. “You just need to sign it.”

Georgia pulled the contract out of the air and ripped it in half. There was a moment’s resistance and then the parchment tore in her hands, crumbling to dust with an unpleasant stench of burning sulphur.

“Well, there was no need for that.”

“I’m not stupid, you know! My ‘immortal soul’? I know what you are, and I know that’s a terrible deal.”

“Yes, it’s stupid, stupid, stupid. It’s all in the name – ‘immortal’. Whatever you can give me now, however good it is, it can’t be worth eternity, can it?”

Lili thought about her previous clients, and had to admit that the word ‘stupid’ could certainly be applied. Oh they were certainly talented, some of them – violin virtuosos, Blues guitarists, chessmasters, board game geeks – but Georgia was right. They did have to be pretty short-sighted not to see past the general unfairness of the entire deal. Lili was a little impressed.

“That’s what I told the other one.” Georgia continued, her tone more even. “I’m not looking to make that kind of deal.”

“Fine. Good for you.” Another deal she couldn’t close. Well, at least this one stopped before it got too embarrassing. Who knew what kind of contest Georgia might have challenged her to, at the end. Shouting. Finger pointing. Competitive ranting? Lili blew out a sigh of relief. “So why are you here?”

“Amy seemed to think I had something else to offer.” With that, Georgia laid a dainty hand on Lili’s arm. “Is there anything else you’d like?”

Lili fumbled for her hipflask like a drowning woman reaching for a life-raft. It all made sense. Amy’s suggestion that this one was different; this one was special. And Lili’s birthday was coming up…

“Oh not-my-lord Jesus, you’re a stripper.”Lili pointed at the gaping Georgia. “Just… keep your panties on for a sec, okay? Very funny, Amy!” she yelled into the night. “I get it! Happy birthday to me. Where are you hiding? Aren’t you going to come out and sing?”

“I am not a stripper.” The chill in the girl’s voice froze Lili’s blood.

“You… aren’t?” Lili wondered if Georgia could hear her disappointment.

“And, and, I’ll have you know,” Georgia continued, her voice growing stronger, “you act like you’re so together; like you look down on people for needing your help, but your ‘friend’ strongly implied that I wasn’t the only person with a problem that could be solved tonight.”

“I reckon that not having seen a naked woman for nearly a century could count as a problem.”

Georgia gave a cry of frustration and kicked the barn wall, which shuddered alarmingly and dropped dust in protest. Humans. They didn’t like to be accused of taking their clothes off for money; she’d have to remember that one for later. Although why that had upset Georgia more than the actual stabbing…

“Okay, okay. I’m sorry. You’re not a stripper.” She really was sorry that Georgia was not a stripper. “I’m sorry I upset you. But what I think you and me need to do… to work out between us, is why Amy sent you to me.”

“She said I could offer you something. Not my soul. Something else.”

Georgia took a step towards her. Lili could smell her violet perfume.

“Right.” The demon swallowed. “And she didn’t elaborate.”

“Nope. She must have thought we could figure it out for ourselves.”

She was so close now that Lili could see the freckles across the bridge of her nose. They were cute.

Amy must have a mischief demon in her ancestry, somewhere, Lili concluded.

“Well… I guess I do have some problems.” Lili thought of her poor performance reviews and winced. “These contracts – I haven’t been very successful lately.”

Lili thought of Scrabble scores, chess pieces and the screeching of tortured violin strings. “I don’t think so.”

“You need to practice spending time around people and not, you know, insulting them horribly. I could help.” She was so close Lili could kiss her nose without leaning forward. “We could spend time together. Not insulting each other. Though you’d have to use your newfound skills for good. I don’t like those contracts of yours.”

Lili could hardly breathe. “The innocent ones always find a way out,” she managed, “it’s built into the system. But lately I’ve sucked so bad that even the evil ones have got away. Believe me, it’s not my people skills that are the problem.”

“Oh.” Georgia looked disappointed. “It might have been nice, though. To see you more, I mean.” She didn’t move away.

Lili gulped. “Georgia, do you… want to go get a cup of coffee?”

“Oh. That would be lovely.” Georgia beamed.

“Yes, I think we’ve established that, thank you.”

“No, but, I mean,” Lili put her hands up, placating, until she saw Georgia grinning. “what do you do?”

“Yep. Violin, mostly, but a bit of cello and Spanish guitar – wait. What’s so funny? You’re not laughing at me, are you?”

When Lili had caught her breath, she smiled. “Nope. But I know why Amy set this up. I warn you… I’m a slow learner.”

“We’d have to spend lots of time together, getting everything right Hell, I may never learn at all.”

Lili held out her hand, and Georgia took it.

Jenni Hill is an editor for science fiction and fantasy publishers Orbit Books. She also has a Grade 2 in violin.