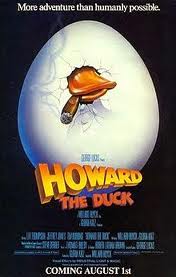 Warning: there is a NSFW image below.

Obviously I wasn’t just going to leave it at that, but if you were inclined to surf past this post and not read beyond that jump, that’s all you need to know.* I turned it off 10 minutes in.

I have a pretty high shit-watching threshold. I have watched a lot of really terrible films over the years. But this? Possibly the worst ten minutes of film I have ever seen. It is just fucking terrible.

So, what happened in that ten minutes? Well, Howard – an anthropomorphized duck – gets sucked off his Earth-like duck-planet and winds up on earth. Outside a ‘punk’ club in Cleveland, Ohio. Where a lot of people in 1986’s version of ‘punk’ are ‘rocking out’ to some ‘punk’ music sung by a girl with, prepare yourself, crimped hair. Howard does a shocking amount of pratfalling on his tumble through Cleveland, past every racist, sexist, lazy fucking stereotype of ‘people who live in cities’ imaginable before winding up in a dumptser. Meanwhile, our pretty ‘punk’ singer gets attacked by two ‘punk’ guys in a parking lot. She half-heartedly fights them off while they try to molest or rape her, because this is a horrible exploitative 80s film that plays shit like this for laughs. There is some excruciating dialogue, delivered excruciatingly, such as:

Barbara: [speaking as if the line is a single word] THENWHYDON’TYOULEAVEMEALONE!!!?!?!?

Then Howard pops out of the dumpster where he’s been, um, like, sitting and does ‘duck-fu’ and fights the ‘punks’ off. There’s a lot of screaming and some jokes about drugs and then we turned the film off.

Not convinced? How about this, shown while Howard is being pulled to Earth? 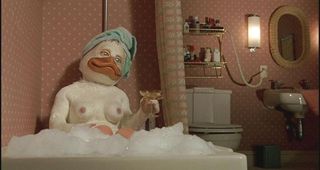 YES THE DUCK HAS BOOBS. I’m sure this is a reference to the comic, which I’ve never read, but what the ever-living fuck. How could anyone have thought that was a good idea?

I didn’t make it this far, but apparently Howard gets turned on later in the film. Quoth Wikipedia: ‘The effect of the feathers on Howard's head becoming erect during the love sequence took months to prepare.’

Did I mention that the cast includes Tim Robbins? I mean, obviously, this was years before he got famous, but zomg. Zomg, zomg, zomg.

When I watch films, especially bad ones, I try to keep in mind the long and laborious process involved in producing a finished movie – weeks or months of filming (and almost never in chronological sequence); more weeks or months of editing hundreds of hours of raw footage into a 90+ minute thing with, like, something resembling a cohesive story and some reasonable character development and as few goofs as possible. Even great films have continuity errors, mediocre actors, flubbed dialogue, shitty sets. Bad films have lots of those things.

But Howard the Duck? Is only those things. The moment the director and producers saw the duck costume, surely they must have… surely they couldn’t have… surely someone must have felt something approaching doubt. (Wikipedia says yes, they did.) 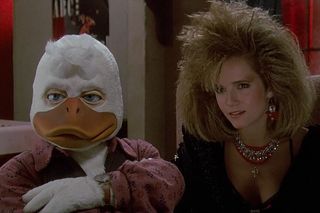 But, somehow, this unbelievable film got made, and now it’s part of the cinematic fossil record.

And I will live the rest of my life knowing that I’ve seen duck-boobs on film.

* I’ve wanted to give a one-word review to a film for years, since discovering that my favorite perfume – the one I wear daily – has a one-word review in some encyclopedia of perfumes (‘Unbearable,’ I believe. Way harsh, Tai.)