Fiction: 'The Ruins of San Francisco' by Bret Harte 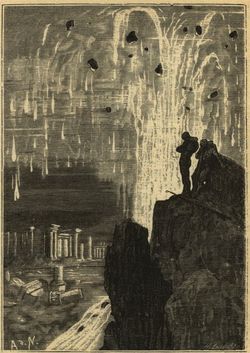 Extracted from the archives of The Atlantic Monthly, 2865.

Towards the close of the nineteenth century the city of San Francisco was totally ingulfed by an earthquake. Although the whole coast-line must have been much shaken, the accident seems to have been purely local, and even the city of Oakland escaped. Schwappelfurt, the celebrated German geologist, has endeavored to explain this singular fact by suggesting that there are some things the earth cannot swallow, — a statement that should be received with some caution, as exceeding the latitude of ordinary geological speculation.

Historians disagree in the exact date of the calamity. Tulu Krish, the well-known New-Zealander, whose admirable speculations on the ruins of St. Paul as seen from London Bridge have won for him the attentive consideration of the scientific world, fixes the occurrence in A. D. 1880. This, supposing the city to have been actually founded in 1850, as asserted, would give but thirty years for it to have assumed the size and proportions it had evidently attained at the time of its destruction. It is not our purpose, however, to question the conclusions of the justly famed Maorian philosopher. Our present business lies with the excavations that are now being prosecuted by order of the Hawaiian government upon the site of the lost city.

Every one is familiar with the story of its discovery. For many years the bay of San Francisco had been famed for the luscious quality of its oysters. It is stated that a dredger one day raked up a large bell, which proved to belong to the City Hall, and led to the discovery of the cupola of that building. The attention of the government was at once directed to the spot. The bay of San Francisco was speedily drained by a system of patent siphons, and the city, deeply embedded in mud, brought to light after a burial of many centuries. The City Hall, Post-Office, Mint, and Custom-House were readily recognized by the large full-fed barnacles which adhered to their walls.

Shortly afterwards the first skeleton was discovered; that of a broker, whose position in the upper strata of mud nearer the surface was supposed to be owing to the exceeding buoyancy or inflation of scrip which he had secured about his person while endeavoring to escape. Many skeletons, supposed to be those of females, encompassed in that peculiar steel coop or cage which seems to have been worn by the women of that period, were also found in the upper stratum. Alexis von Puffer, in his admirable work on San Francisco, accounts for the position of these unfortunate creatures by asserting that the steel cage was originally the frame of a parachute-like garment which distended the skirt, and in the submersion of the city prevented them from sinking.

"If anything," says Von Puffer, "could have been wanting to add intensity to the horrible catastrophe which took place as the waters first entered the city, it would have been furnished in the forcible separation of the sexes at this trying moment. Buoyed up by their peculiar garments, the female population instantly ascended to the surface. As the drowning husband turned his eyes above, what must have been his agony as he saw his wife shooting upward, and knew that he was debarred the privilege of perishing with her? To the lasting honor of the male inhabitants, be it said that but few seemed to have availed themselves of their wives' superior levity. Only one skeleton was found still grasping the ankles of another in their upward journey to the surface."

For many years California had been subject to slight earthquakes, more or less generally felt, but not of sufficient importance to awaken anxiety or fear. Perhaps the absorbing nature of the San Franciscans' pursuits of gold-getting, which metal seems to have been valuable in those days, and actually used as a medium of currency, rendered the inhabitants reckless of all other matters. Everything tends to show that the calamity was totally unlooked for. We quote the graphic language of Schwappelfurt:

The morning of the tremendous catastrophe probably dawned upon the usual restless crowd of gold-getters intent upon their several avocations. The streets were filled with the expanded figures of gayly dressed women, acknowledging with coy glances the respectful salutations of beaux as they gracefully raised their remarkable cylindrical head-coverings, a model of which is still preserved in the Honolulu Museum. The brokers had gathered at their respective temples. The shopmen were exhibiting their goods. The idlers, or 'Bummers,' — a term applied to designate an aristocratic, privileged class who enjoyed immunities from labor, and from whom a majority of the rulers are chosen, — were listlessly regarding the promenaders from the street-corners or the doors of their bibulous temples. A slight premonitory thrill runs through the city. The busy life of this restless microcosm is arrested. The shopkeeper pauses as he elevates the goods to bring them into a favorable light, and the glib professional recommendation sticks on his tongue. In the drinking-saloon the glass is checked half-way to the lips; on the streets the promenaders pause.

Another thrill, and the city begins to go down, a few of the more persistent topers tossing off their liquor at the same moment. Beyond a terrible sensation of nausea, the crowds who now throng the streets do not realize the extent of the catastrophe. The waters of the bay recede at first from the centre of depression, assuming a concave shape, the outer edge of the circle towering many thousand feet above the city.

Another convulsion, and the water instantly resumes its level. The city is smoothly ingulfed nine thousand feet below, and the regular swell of the Pacific calmly rolls over it. Terrible as the calamity must have been, in direct relation to the individuals immediately concerned therein, we cannot but admire its artistic management; the division of the catastrophe into three periods, the completeness of the cataclysms, and the rare combination of sincerity of intention with felicity of execution.

"The Ruin of San Francisco" was first published in The Californian (April 1865).

No San Franciscans were harmed in the making of this blog post.