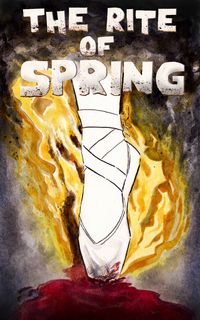 Freud is dreaming. White wolves chase him along the royal road.

But I’ve analysed this dream, he thinks as he runs. The wolves represented the patient’s parents.

A furred weight hits him hard in the back. A snarl in his ear: “We are not your parents.”

He wakes in sweat.

Last night he was pursued by the horse that represented Jung’s sexual drives, and the vulture symbolising Leonardo Da Vinci’s mother. Beasts trample and peck him and insist they are not symbols but horses, birds, wolves.

Freud is lucid in his dreams, supremely aware of psychoanalytic principles. Unfortunately, so are the animals.

As Freud enters the Café Central, cold wind rustles the newspapers hanging on the wall. Freud sees the Berlin Vorwärts shivering unread on the table of a limp-haired threadbare young fellow.

Three women fuss in Freud’s way until it’s too late - the young man has picked up the Vorwärts.

The women have penned Freud into a corner seat. “Of course.”

The café is half empty. The woman smiles at her lie.

Fear plucks Freud’s sleep-starved nerves. Freud meets loose women in cafés! But the women are dressed dowdily. One - not the Smiler - even looks like his mother. (Freud tells strange women they look like his mother!)

“Are the cakes here good?” asks the maternal woman.

“You’d rather talk to our sister,” says Smiler.

The third sister is turned away, staring at that tatty young man, the Vorwärts thief. facing the forest of pillars. And yes, Freud would rather talk to her. He can only see the pale edge of her cheek, but she is beautiful.

He wants to belittle Smiler. It’s puerile to tease a man for such an obvious impulse. “Well, that’s inevitable.”

“She’s not a conversationalist,” says Smiler.

Certain women’s names bloom in Freud’s mind, names which are also verbs and which therefore command a particular response: Amanda, Miranda, from amare, she who should be loved; Miranda, from amari, she who it is fitting to admire. There is a similar compulsion about the third sister. It is fitting to desire, to adore, to choose her. His insides flutter, from chest to groin.

“Some women don’t need to talk all the time,” he snaps.

Why is she staring at the limp-haired man? Threadbare clothes, paint-stained wrists, one coffee and four glasses of water - that cheapskate trick.

“But think, darling,” insists Smiler. “What else is silent? And inevitable?”

Freud understands what Smiler is hinting. The beautiful sister is - something else, too.

Then he sees: he is hallucinating! Not even a terribly original hallucination (Death is often a Goddess, mythological sisters come in threes.) But so vivid!

“No, Siggie. She came here for him.” The Mother nods to the limp-haired man.

“He’s one of her supporters,” says Smiler.

“Will there be a war?” Freud congratulates his subconscious for being alert to international tensions.

Mother beams. “You were always clever!”

“Not the next war,” corrects Smiler. “One of the ones after that.”

The man seems an unlikely candidate. Not a politico, only a twitchy bohemian.

“She protects him from harm,” says Mother.

“Until he can harm others,” adds Smiler.

Freud lunges, desperate to see the silent woman’s face. Her sisters block him.

“You’re keeping me away.”

The sisters laugh until Freud shoves past them, out of the café.

Outside, he cringes at his own arrogance: to offer to analyse a character from one’s own hallucination!

At least it showed dedication. Indeed, the whole hallucination doubtless sprang from his dedication. Freud fears for psychoanalysis; he has no worthy successor, the movement may founder. Fear of failure has generated both this hallucination, and his recent dreams.

And both show not his weakness but his commitment. He strives to analyse, even when dreaming or hallucinating! That - surely - betokens success?

Now he has solved the puzzle, he will certainly not dream of animals - lizards with their tails pulled off, snakes, spiders. All of them biting him, telling him: We are not castration anxieties, male members, phallic mothers, proofs of your victory. We are animals. We live in your dreams.

But it is in vain that an old man yearns for the love of woman as he had it first from his mother; the third of the Fates alone, the silent Goddess of Death, will take him into her arms. - Sigmund Freud, 1913

Esther Saxey (@brieflyfoxed) is a compromise formation. Esther’s short fiction has appeared in The Lowest Heaven, Holdfast and Spacewitch Moonshots , and is forthcoming in Daily Science Fiction and Apex Magazine.

Pandemonium: The Rite of Spring is out today from Jurassic London. It contains five brand new stories of (slightly disturbing) alternate history, all set in the year 1913. (Amazon US / Amazon UK / Kobo / Goodreads)