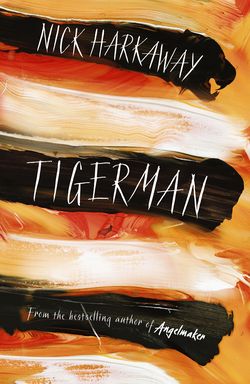 On the steps of the old mission house, the Sergeant sat with the boy who called himself Robin, and watched a pigeon being swallowed by a pelican.

The whole business had come as a surprise to everyone involved, not least of all it seemed to the pelican herself, who had engaged in the attempt almost absently and now appeared to be wishing it was over and done. She was by nature a placid bird, slow to take wing and hard to rile, but the pigeon had been presuming on her good nature for several months now, scooting between her and the pieces of bread that people tossed in her direction as they wandered by, fluttering down to snatch treats of fish almost from her beak.

This morning, the pelican had had enough, and when the pigeon came between her and a bit of tuna, she had just opened to the fullest extent and engulfed the fish fragment and the pigeon both, to squawks of outrage and alarm from her antagonist. To the Sergeant’s eye, her swollen gullet had possessed at that moment the dreamy smugness of a trick well played, but he acknowledged inwardly that the faces of birds were impenetrable, so it could as well have been the foreknowledge of indigestion.

The boy had been very impressed, which is to say that – contrary to established practice – he put down the comic book he was reading on the wall beside him and stared, his attention entirely taken up by the drama unfolding. The Sergeant had never seen him do this before. Even last year, when the volcano had briefly erupted and ash and fire had been falling all around, and the Sergeant had scooped him up under one arm and run like hell for the shelter of a convenient cellar, the boy had retained a desperate grip on Planetary no. 7, and clamped his other hand to the elderly Nokia cellphone which he kept in his left hip pocket.

These items were the only evidence that someone else cared for him. The phone kept working and every so often he had a new comic, worn about the edges but with all its pages, and rarely more than three months out of date. Sometimes he carried a knapsack which contained several at once, when the supply had been irregular and he’d been hoarding two or three while waiting for the previous issue, so as not to have things happen out of order. He was very particular about continuity, he had told the Sergeant in so many words. Events should happen in their proper time.

‘Otherwise the story will not work,’ he said. ‘Totally bogus narrative structure. WTF?’ He actually spoke the letters ‘WTF’, and rolled his eyes.

That was just how it was. The boy’s English was self-taught and uneven, peppered with guest appearances from movies and TV, from online games whose players were in America, Europe and China. When he spoke he could shift in one moment from the manner of a too-serious Harvard freshman to that of a teenaged Shanghai gold-farmer sweating in a vast warehouse of machines.

On the topic of stories and character, he was particularly donnish and sniffy: ‘There must be development-over-time or it is just noise.’ And when it appeared that the Sergeant was not entirely following this line of discussion – it was one of their earlier conversations and the older man’s education in these matters was not yet properly begun – he had changed tack and demanded whether the Sergeant might have any lightweight twine that would work for a kite string. Which he had, and had happily given up.

The pigeon’s head disappeared, and the noises of protest from the pelican’s throat began to fade. The boy picked up the comic again and read with his usual intensity. The Sergeant leaned back against the stone in such a way as to suggest that the affair had been nothing special, though in all honesty he’d never seen anything to compare with it.

They were an unlikely twosome. The man was of medium height and craggy. He was still six months shy of forty, but he looked fatigued and even a little lost. His face was leathered by a life of actual soldiering in inclement places, and he had scars, about which he was self-conscious. Scars were supposed to be narrow white lines which looked raffish, not puckered worms slithering forever across your shoulder and itching abominably. They should be discreet, so that a man could boast about them to girls. He was thickset – and some of that was this recent bout of soft living, he had to concede, even if the rest was working heft – but he seemed to move carefully, as if the world was fragile and he didn’t want to break it.

The boy meanwhile was androgynous in the way of boys, with no fat on his body at all, and scruffy black hair cut short. He seemed to be interested in everything, had a restless intelligence which might even qualify as genius. The Sergeant guessed his age as between ten and fourteen, but could not narrow the range. There was dust on him always, and often grass stains or splashes of oil. His forearms were corded with child’s muscle from whatever work it was that he did – and it seemed he did a bit of everything – when he wasn’t reading comic books and spending time with his friend. He wore a long smock which was rather too big on his shoulders, so that on a bad day he looked like a match-stick man in a lampshade. In the late-afternoon light and under the cracked façade of the mission house, he resembled a monk, and the Sergeant expected him at any moment to lift his head and preach from the Book of Superman. Chapter 9, verse 21: the world shall know thee as a blur and as a sign upon the heavens, as a hope and an earnest of good things.

When the boy had finished reading, he looked up to assure himself that nothing of importance was taking place with the pelican, and then glanced over at the Sergeant. It was the hour of the day when they usually went to Shola’s and took tea. The island of Mancreu had very few customs left, but tea had somehow clung on, and of all the cafés and bars – and as far as these two were concerned the remaining living rooms and campsites and samovars as well – Shola’s made the best tea. Shola had a proper kettle and he didn’t leave the dregs in the pot or the scale in the water. He was a dandy and a gambler, but he knew tea.

The Sergeant had left his car at the fish market, ten minutes away along the seafront. This was also customary. Walking along the front allowed him to say hello to everyone. The afternoon greeting was important for social order. Like tea, a British sergeant taking his ease along the promenade was a solid, familiar thing. It said that there was still sense in the world. In theory, of course, the British presence here had been withdrawn three years ago, claims of sovereignty having been yielded to the NATO and Allied Protection Force on Mancreu, NatProMan. The Sergeant was technically the senior officer (albeit non-commissioned) in the United Kingdom’s Mancreu Command, and as a side job he was senior consular staff member, too. ‘Just don’t issue any bloody passports without checking the rules,’ the actual Consul had told him as he left, ‘and for Christ’s sake don’t let anyone talk you into signing any treaties.’

‘Could I?’ the Sergeant asked.

‘No,’ the Consul said. ‘But you could make a frightful mess, so don’t. Take the keys, enjoy the house, and rest up. I understand that’s why you’re here. Just nod to everyone and don’t annoy Kershaw at NatProMan and this’ll all be done in a few months. They can’t keep the place around much longer. It’ll be nice for you.’

Saying hello, therefore, was the greater part of the Sergeant’s official function. He was to keep the consulate open and ensure that assistance was forthcoming to any British citizens who needed it, though this essentially meant calling the British Embassy in Yemen, and in any case had never actually been required. In many ways his real job was simply to occupy Brighton House, the sprawling, haunted old manse on a hill overlooking Beauville – the only town of any size on the island – which had in former times been the seat of colonial power. With its back to the mountains and the jungle, and its pocked face to the sea, Brighton House was almost identical to every British holding in the various candle ends of Empire – even if perhaps the coming destruction of the island did make it dolefully unique.

And so these were his days, week in and week out, and had been for more than two years: walk, take tea, and say hello. As the inheritor of what remained of British authority, he could additionally marry anyone who for some unlikely reason wanted him to officiate rather than a local priest, and he could facilitate adoptions and divorces for EU passport holders. Other than that, he could if he chose investigate local crime at the behest of a relevant person (it was unclear who was relevant so he tended to interpret this according to his lights) and he had the right to sit in on NatProMan Strategic Board meetings as representative of the United Kingdom – which had chosen firmly to abrogate such representation and therefore he was under orders not to.

Tigerman is released May 22nd. It is amazing. Seriously, amazing. You can pre-order it from all sorts of places, including Amazon, Waterstones, Foyles, Blackwells and your local independent bookstore.