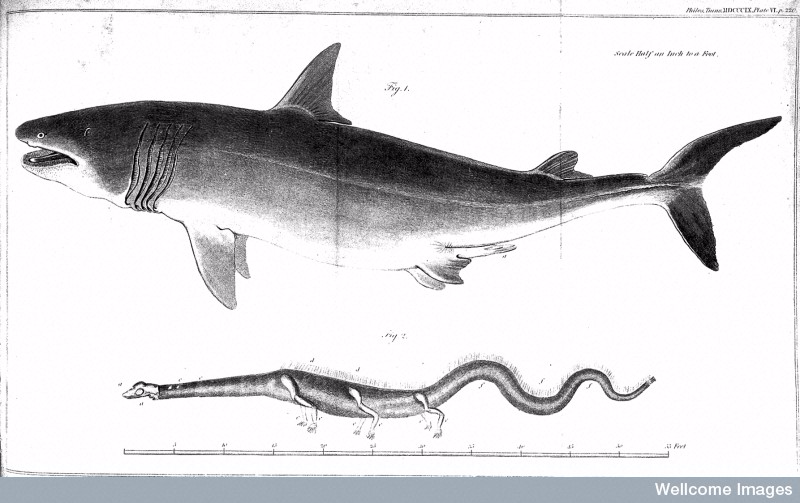 The belief in sea-serpents does not appear in itself to be an unreasonable one, much as it is from time to time ridiculed. Many species of tropical snakes are aquatic in a greater or less degree, and though some naturalists will tell us that a serpent is not adapted by its structure and organs for a purely aquatic existence, one finds in nature so many wonderful adaptations of form to abnormal circumstances, that it is perhaps wiser to feel that in the great and almost boundless expanse of ocean there may be mysterious forms that science has not yet tabulated and described, rather than to at once assert the contrary. Be this as it may, there is no doubt that while the great mystery of the ocean depths has been tenanted by the credulous with impossible creations of the fancy, we have numerous testimonies from sea-captains and others of appearances that cannot always be so lightly dismissed.

A Captain Harrington, for instance, commanding the “Castilian,” during a voyage from Bombay to Liverpool in the year 1857, sends the following account to the Times newspaper:

While myself and officers were standing on the lee side of the poop, looking towards the island of St. Helena, then some ten miles away, we were startled by the sight of a large marine animal, which reared its head out of the water within twenty yards of the ship, when it suddenly disappeared for about half a minute, and then made its appearance in the same manner again, showing us distinctly its neck and head about ten or twelve feet out of the water. Its head was shaped like a long buoy, and I suppose the diameter to have been seven or eight feet in the largest part, with a kind of scroll or tuft of loose skin encircling it about two feet from the top.

The second appearance assured us that it was a monster of extraordinary length, which appeared to be moving slowly towards the island. The ship was going too fast to enable us to reach the mast-head in time to form a correct estimate of its extreme length, but from what we saw from the deck we conclude that it must have been over two hundred feet long. The boatswain and several of the crew, who observed it from the forecastle, state that it was more than double the length of the ship, in which case it must have been five hundred feet. Be that as it may, I am convinced that it belonged to the serpent tribe; it was a dark colour about the head, and was covered with several white spots. Having a press of canvas on the ship at the time, I was unable to round to without risk, and therefore was precluded from getting another sight of this leviathan of the deep.

This precise description was endorsed by the chief and second officers of the ship—men, like the captain, of practised vision, and not at all likely to be deceived by floating sea-weed or any of the other matters brought forward to cast doubt on such stories.

It is curious that another apparently well-authenticated account of some such creature should also hail from the neighbourhood of St. Helena. Her Majesty’s ship “Dædalus,” in August 1848, when on the passage between that island and the Cape of Good Hope, came into close proximity with a strange-looking creature that was travelling through the water at an estimated speed of ten miles an hour. Captain McQuahee was unable, owing to the direction of the wind, to bring the ship into pursuit, but, as the creature passed within two hundred yards of them, they were enabled to bring it well within observation, its form and colour being distinctly visible from the vessel.

Olaus Magnus, Archbishop of Upsal some three centuries ago, was a firm believer in the marvellous, and in his writings, amongst many other things, he gives details of a sea-serpent two hundred feet long by twenty feet thick, having a dense hairy mane and eyes of fire. This monster, he further tells us, “puts up its head on high like a pillar and devours men.” He also tells of another kind, that is forty cubits long and no thicker than a child’s arm; this is blue and yellow in colour. His writings also furnish a more detailed account of a vast monster thrown ashore in 1532 on the English coast near “Tinmouth.” This creature was ninety feet long and twenty-five feet thick, having thirty ribs on each side, a head twenty-one feet long, and two fins of fifteen feet each. This creature, from its proportions, fins, and so forth, was evidently not serpentine in character, though it may fairly be classed amongst monsters of the deep.

A Greenland missionary, Egede, tells in his journal of a frightful sea-monster that he saw on July 6, 1734. It raised itself so high out of the water, he says, that its head overtopped the mainsail. It had a long and pointed snout, and spouted like a whale; its fins were like great wings. Another very circumstantial account is that given by Captain Laurent de Ferry of Bergen in 1746. His creature had a horse-like head, raised some two feet out of the water; in colour it was grey, but it had a white mane and large black eyes. Seven or eight coils of the creature were visible, a fathom or so of space between each. De Ferry says that he shot at and wounded the monster, and that the water was reddened with its blood for some time after. He does not specify whether the weapon used was the longbow or not, but it seems highly probable that it was.

Where the account given is so exceedingly definite as it is, for example, in these two last instances, we are placed in the awkward predicament of either having to believe in the monster so graphically described, or to disbelieve the narrators of the stories; to conclude, in plain words, that Egede, despite his professions, was lying deliberately—a very Munchausen—and that De Ferry was either a credulous idiot himself, or wilfully concluded that the landsmen’s credulity might be safely played upon.

A good sea-serpent story is found in Captain Taylor’s “Reminiscences.” One day, when his ship was lying at anchor in Table Bay, “an enormous monster” about one hundred feet in length was seen advancing with snake-like motion round Green Point into the harbour. The head appeared to be crowned with long hair, and the keener-sighted amongst the observers could see the eyes and distinguish the features of the monster. The military were called out, and after peppering the object at a distance of five hundred yards, and making several palpable hits, it was observed to become quite still, and boats ventured off to complete the destruction. The “sea serpent” proved to be a mass of gigantic sea-weed, which had been undulated by the ground swell, and had become quiescent when it reached the still waters of the bay. Probably if mariners would attack the “monster” in the same manner whenever it is seen, we should hear little more of the sea serpent.

Stories of sea serpents are almost as old as the hills, and in many cases quite as difficult to digest.

In 1808 the body of a great sea monster was cast ashore at Stronsay, one of the Orkneys. This was some fifty feet long, and every one, even the fishermen themselves, declared that the sea serpent had turned up at last. A naturalist, however, decided that it was only an unusually fine specimen of the great basking shark; so we are as far off as ever, after all, from an authentic monster, and seem in every case to have only offered for our acceptance either outrageous hoaxes and impositions, the imaginations of the credulous, or, at the very best, cases of mistaken identity.

Amongst other serpent myths we may certainly place that most uncomfortable creation of the fancy, the Adissechen, a serpent with a thousand heads that, according to the Indian mythology, bears up the universe; and the Iormungandur, the serpent that according to the Scandinavian myth, encircles the whole earth, and binds it together in its flight through space.

It was a very old belief that the serpent’s egg was hatched by the joint labour of several serpents, and was buoyed up into the air by their hissing. Any one so intrepid as to catch it while thus suspended ’twixt earth and heaven bore away with him a talisman of mighty power, giving him strength to prevail in every contest, and the favour of all whose favour was worth the having. It could only be captured at the gallop, and even then the risk of being stung to death was a peril most imminent. Pliny tells us that he had himself seen one of these notable proofs of prowess, and that it was about as large as a moderately large apple.

"On Sea-Serpents" is extracted from F. Edward Hulme's Myth-land (1886). Hulme is best remembered for his contributions to botany and botanical illustration (especially his nine volumes of Familiar Wild Flowers), but he also published books on cryptography, heraldry, history and, with Myth-land, cryptozoology.