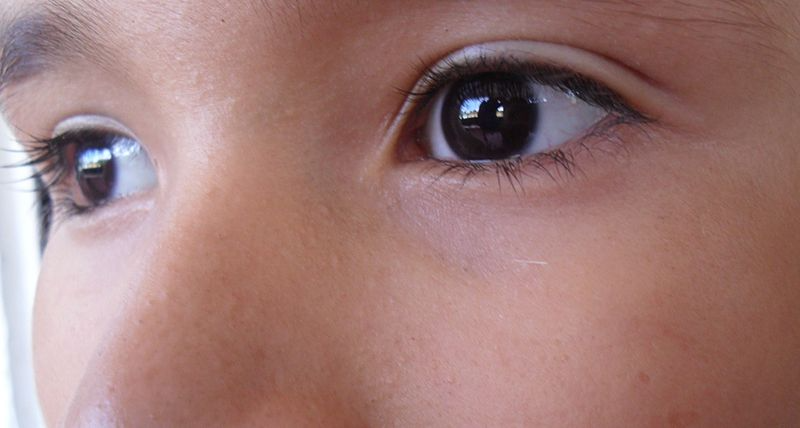 The monster came to live under my bed when I was ten years old, before we moved out of Uncle Toby’s. Mum wouldn’t let me have a pet, in case it triggered one of Megan’s allergies. Not even a goldfish, a stick insect, or a tank of giant snails. I wanted a puppy with sharp snapping teeth to snarl at Uncle Toby, or a kitten with uncut claws that could scratch out a warning in the paintwork of his van. A monster, I soon realised, was better than any pet.

Ravi, my best mate, lived next door and didn’t believe in monsters. After school one day I dared him to look under my bed. "I can’t see anything," he said stretching out a skinny, brown arm as far as he could.

"Right at the back, near the wall." I was beside him, staring straight into the monster’s golden eyes.

Suddenly Ravi wriggled backwards like a clumsy snake, yelping as his head bashed against the bed frame. He leapt onto my duvet and swore at me in Hindi. Then switching back to English he screeched, "What the hell is that, Mark?"

"It’s scrunched into a ball like a hedgehog and shaking all over." Ravi’s voice trembled. "It looked terrified." I could see knucklebones straining through his skin as he gripped his hands.

"You look pretty scared yourself," I said, a little unkindly since I’d begged him to come and prove I wasn’t going mental like Megan. "What do you think it is?"

"Nani must come and see it. Nani knows about everything."

Ravi’s grandmother lived with his mum, dad and Ravi’s three brothers. She didn’t speak any English but always waved to me from the porch, surrounded by chilli and tomato plants, when I came home from school.

After Ravi left to fetch his grandmother I crouched down to peer back under the bed. The monster’s amber fur felt soft against my face. A gentle purr rumbled from deep within its belly, as I stroked the scaly spines along the creature’s tail. There was no need to say anything out loud. I could calm the monster with my thoughts.

I hoped Ravi would return quickly, before Mum arrived home with Megan. On Tuesdays Mum took my sister to see her special doctor. Mum said the doctor was helping Megan to find her voice again. Until she started school Megan was a "right little chatterbox", Mum’s words, and then suddenly all her words fell out, just like Granddad’s hair before he died. If I sat close to the banisters at the top of the stairs some evenings I could hear Mum talking to Uncle Toby in the kitchen. I never heard what he said back to her, only the hiss and crack of a ring pull after he took a can from the fridge. The special doctor, I knew this meant psychiatrist, reckoned starting school had been a "traumatic event" for Megan and so she simply stopped talking all together.

At night, when Mum and Uncle Toby had gone to bed, I took my pillow and slept beside the monster. Its thoughts echoed mine. Adults were stupid. None of them considered that Megan had stopped talking weeks before she started Primary School, but only days after we moved in with Uncle Toby.

It took several minutes for Ravi’s grandmother to creak down onto her knees and then to shuffle forwards and lower her grey head beneath the bed. At first she was silent. Then she began clicking her tongue as if calling a horse. Ravi sat cross-legged in the middle of the bed, while I waited beside the old woman eager to hear her pronouncement. Her lemon sari smelled of sunshine.

We both had to help her stand up again. The bed sighed as Ravi’s grandmother sank down. Ravi gently eased her feet back into the slippers that had fallen off under the bed. "Does she know what it is?" A thousand questions fluttered in my head all clamouring to take flight.

The old lady talked fast, without taking in air. When she finally stopped Ravi shushed for me to keep quiet, so he could organise her outpouring into a sensible translation. "Nani says you are blessed," he began. "It has chosen to live with you; this is a very lucky thing. For you and all your family."

"But what is it? Is it a monster?" Ravi translated my question. Her bony fingers flicked the side of my head and a rapid gush of Hindi swept over me. "Ouch! Hey, that hurt," I cried.

"Silly boy," said Ravi smirking, "there are no such thing as monsters."

I flinched as her hand came towards me again, but this time she pressed it flat to my T-shirt over my chest.

"She says the only monsters are in here." Ravi laughed, "Nani means inside your heart."

"Yeah, I get that, clever-dick. What does she mean by that? That I’m a monster?"

He shook his head. "Monsters live in the hearts of men. Mostly they are sleeping like pussycats in the sun, but some are fearless tigers, driven mad with the urge to do bad things."

Ravi’s eyebrows crinkled as his grandmother continued talking. He screwed a finger into the side of his head. "Think she needs to visit your sister’s loony doctor," he murmured to me. "Nani is a bit confused."

"Your creature is very rare. She has heard stories but never seen one herself or heard of anyone who has. She thanks you for letting her see its white feathers and emerald green eyes, it is truly beautiful." He shrugged his shoulders. "That’s not what I saw under your bed."

This time Ravi flicked me. "Did you not listen, silly boy? Nani said it has chosen you."

Did that make me its pet?

"What’s going on, Mark? What are you all doing up here?" Crap. I’d forgotten to listen out for Uncle Toby’s van. Typical, just for once he’d turned up before Mum and Megan. "Something stuck under the bed, mate?"

He dropped to the floor, turning his head sideways to squint into the gloom. Ravi spoke quietly to his grandmother. She nodded; then they both stepped over Uncle Toby’s legs and scurried from the room.

"What the f-?" His voice leapt into a screech, as he reappeared with a bloody line across his cheek. "Vermin went for me. Looks more like a demon with those bleeding red eyes and spiky black fur." He wiped a hand across his mouth. "I’ve got a spade in the van, that’ll flush the bugger out."

I was considering if I could drag the chest of drawers over to barricade the door shut. If I could keep Uncle Toby out of my bedroom then the monster was safe.

Mum walked in as I was tipping socks and underpants onto the floor. "Mark, what have you been up to? Toby says you’ve got some wild animal living up here." Megan followed her in and immediately sank down to her knees. "No, Megan, get away! Uncle Toby said it was vicious."

I grabbed Mum’s arm, giving Megan time to disappear up to her ankles under the bed. The room was silent for a heartbeat and then the monster began to sing. There were no words, just strange, sweet sounds that made me think of the seaside, of ice cream and Megan laughing. I’d forgotten how Megan’s giggles made Mum smile.

After several minutes Megan rolled out. She held a long golden feather, giggled and spoke for the first time in weeks. "Mark’s monster is pretty. It sang to me."

Holding a garden spade like a warrior’s spear Uncle Toby pushed past Mum into the bedroom. On seeing him Megan stood in front of the bed. At first she just pointed, but then she started screaming. The screams soon became howls. From under the bed the monster joined in.

We moved out so quickly I never had time to say goodbye to Ravi or his grandmother. And we never saw Uncle Toby again. Megan regained her voice, to the point of irritation, becoming Mum’s chatterbox again.

The monster stayed with me, as Ravi’s grandmother promised, moving with us wherever we lived. When I heard my sister sobbing in the night I’d sneak her into my room. Under the bed we crawled to curl either side of the monster, squashed against its soft warmth we slept safely.

Tracy Fells' writing has appeared in TAB Fiction Feast, Holdfast Magazine, People's Friend and Writing Magazine, as well as upcoming anthologies from the Siren Journal and Bridge House Publishing. You can learn more about her work (and taste in books) at The Literary Pig.

"Monsters" first appeared in The Colour of Life and Other Stories.