Nine Worlds and WorldCon - The Shopping 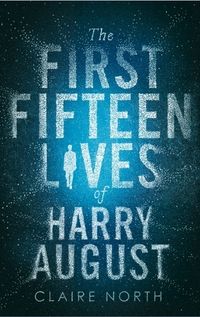 There may or may not be some sort of conpocalypse wrap-up post, but, for now, here's the important bit - all the looting.

Twas the evening before Nine Worlds and I realised that I'd helped a) programme a con with a zillion of my favourite authors, b) was staying on-site the entire weekend, c) had a taxi booked [INFINITE LUGGAGE]. As Anne can testify, this series of revelations lead me down a path that took me until the wee hours of the morning, throwing books into bags (and bellowing things like "WHERE IS MY RED SEAS PROOF?" at the cats).

In fairness, there was some shopping involved, as I picked up Cakes in Space by Sarah McIntyre and Philip Reeve, the Vampire Academy graphic novels by Emma Vieceli, Zen Cho's Spirits Abroad and a small pile of books from Fox Spirit.

Mathematical genius and recluse Gunther Juttahat had devoted his life to the study of π. Decades of work, alone in his university-owned house in the middle of Helsinki. His was a profession (luckily for him!) in which his solitariness and eccentricity were seen as part of his genius. 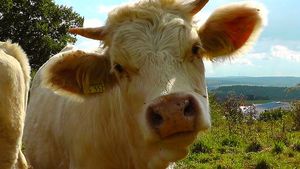 We possibly  just realised that we didn't have a post ready for today. Fortunately, Mark Charan Newton is here and ready to contribute. The three of us decided to hold an early morning meat draft - a good companion piece to one of Mark's earlier visits.

T-Bone. It has two different flavours of meat, and when you're done, you can pick up the bone and gnaw on it. And everyone knows the best meat is next to the bone. Also, called "T-Bone".

Roast Guinea Fowl. You know all the gamey bits on chicken? The ones that taste of things, but the texture can be hit or miss? All of that is in guinea fowl, the breast of which is like tastier chicken. Chicken-Plus!

Kosher Salami. You can fry it or scramble it or just cut it into thick slabs and eat it on top of a bagel. It is the perfect meat. One could say, the blessed meat. 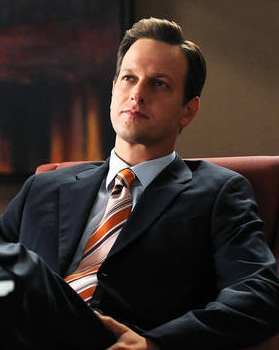 Note: this post was written before news of Robin Williams' death broke. The same perspective that lends itself to a jokey essay about good-looking actors also functions to remind us why Williams' death feels so strange. For decades, Williams was a ubiquitous feature of the pop culture landscape. We'll miss him.

As Jared and I watched the first episode of The Good Wife, we realized that we recognized, but did not know the name of, this guy.

We had to look him up on IMDB to figure it out, but of course the moment we did it all came flooding back: Josh Charles (who plays Will Gardner) played Knox Overstreet in Dead Poets Society. 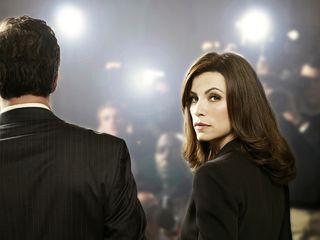 It’s a sight we’re all pretty familiar with: the disgraced politician, standing before a room full of reporters, apologising for the immoral and/or illegal acts he got caught doing. In 2008 it was Eliot Spitzer, then-governor of New York. Standing at his side as he scrunched up his face during a press conference: his wife. He was disgraced. He was done for.

But what about her?

That, in a nutshell, is the premise of The Good Wife. Premiering in 2009, it was inspired by the Spitzer scandal – and, of course, any number of earlier scandals, including Bill Clinton’s affair with Monica Lewinsky. For all of the scandals, during all of those press conferences, the question is always the same: what about her?

And so The Good Wife opens during a press conference in which Peter Florrick, the Illinois State’s Attorney played by Chris Noth, admits to and apologises for sleeping with prostitutes, and then denies that the prostitution is part of a larger corruption scandal. Then he grabs his wife’s hand and storms away from the podium.

But we see the press conference from her perspective – the unnatural colors, the bursts of light as flashbulbs pop, the hollow echo of a sea of shouting voices. When he grabs her, she’s not holding out her hand to him in support, but instead reaching to pluck a stray thread from his coat, one that’s become the entire focus of her attention as he stands bloviating at the podium. The scene takes only a few minutes, but it sets the stage for the entire show. This show is not about a disgraced politician clawing at the shreds of his reputation.

It’s about his wife.

Fiction: 'A Brief History of the Great Pubs of London' by Lavie Tidhar 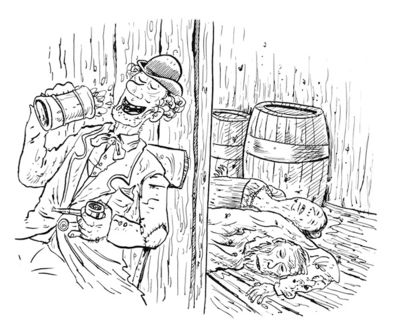 There is no evidence to suggest that the Pilot Inn (est. 1801) was the place where that barrel of brandy first came.

Certainly, these are the facts as we know them: that Vice-Admiral the Right Honourable Horatio Nelson, fighting at Trafalgar, was fatally wounded; that his last words were “God and my country”; that his body was then pickled in a casket of brandy mixed with camphor and myrrh; that his body was then carried back to London, removed from its preserving spirits, placed in a coffin, and put on display in the Painted Hall in Greenwich, for three days and three nights; and that the casket of Nelson’s Brandy had, in the interim, disappeared.

The Pilot Inn would have been a new pub at the time, being merely four years in existence at the time of Nelson’s death. We know it was popular with smugglers and ruffians of all sorts throughout the course of the nineteenth century. Beyond that we know little; we can merely postulate.

Continue reading "Fiction: 'A Brief History of the Great Pubs of London' by Lavie Tidhar" »

Call of Cthulhu at Nine Worlds: The Vanishing Man 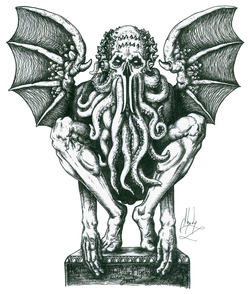 Tonight, four intrepid authors will be playing a game of Call of Cthulhu for the entertainment of the masses.

The player characters are all affiliated with a group called The Rational Society, based out of Miskatonic University in Arkham, Massachusetts. Not an official University organization, the society developed partly as a reaction to the increasing acceptance of parapsychology as an academic subject, starting with Stanford’s experiments in 1911.  The Rational Society, which includes faculty and staff as well as outsiders who share its views, operates on the basis that everything is explicable, even if the explanation is bizarre or outré.

Nelly Blythe (Kim Curran - @KimeCurran) is a local journalist known for going to extreme lengths in pursuit of a story.  She recently had herself committed to an asylum to expose the unnecessary institutionalization of women, a rouse that she was very nearly unable to extract herself from.

“Reggie” Fermier (Scott Lynch - @ScottLynch78) in his guise as “The Great Roderick Royal” is a moderately well-known stage illusionist and slightly better-known debunker of mystics, psychics and other charlatans, which is what brought him to the Society.

Dr Bernard Chambers (Jonathan L Howard - @JonathanLHoward) of the University’s Chemistry department.  A leader in his field, and aware of the peculiarities allowed by quantum theory; of them all, Bernard is probably the most likely to allow that explanations may come from outside that which is currently known.

Previously, Ian Sales took us on five trips to the Moon - this week, he's returned to help us explore the squishy depths of our own world. Ian's latest book is Then Will the Great Ocean Wash Deep Above, the third in the series that began with the BSFA-winning Adrift on the Sea of Rains. Ian's blog covers  all things science and fiction, and you can suggest your own favourite films (underwater or not) with him on Twitter @ian_sales.

Outer space has always been science fiction’s first choice of setting, but there have been a few sf films set in inner space. In fact, there was a flood of them in 1989. Well, perhaps not a “flood” - there were in fact six. But you don’t often see that many films on the same subject released in a single year - well, not unless they’re about Robin Hood. Or set on Mars. Or something.

Four of the films below I first saw around their time of release. I can’t remember if I watched The Abyss in the cinema, but the others were almost certainly on video (an ancient technology which comprised a moving strip of magnetic tape sealed inside a plastic cassette). Except Sphere, which I must have seen on DVD. And The Neptune Factor, which I only saw for the first time earlier this year. 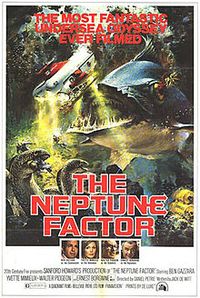 There was a small trickle of underwater films and television series during the late 1960s and early 1970s, probably inspired by Jacques Cousteau’s televised exploits. In 1969, Janet Leigh and Tony Randall set up home, with kids, in an underwater habitat in Hello Down There. On television, there was Primus, which ran for a single season in 1971. And in 1973, Ben Gazzara and the submersible Neptune saved the day in The Neptune Factor. The movie starts off well enough - a group of divers are working on a research programme 350 feet beneath the surface, based out of a tiny habitat. Then a seaquake shakes the habitat loose and it falls from the peak of the seamount on which its sited, down its side and into… the abyss! The only vessel capable of finding the missing habitat, and the two divers trapped inside it, is the submersible Neptune, captained by stone-faced grump Gazzara.

As the Neptune descends into the abyss, it apparently turns into a little model and is subsequently menaced by several giant tropical fish, which are all plainly wondering what is this little plastic thing in their tank. Happily, Gazzara and crew find the two divers, who seem to have survived the pressure without getting squished. They bring them inside the submersible, without decompressing them - fortunately, they don’t explode messily - and everyone is happy. This is a remarkably silly film, and about as scientifically accurate as, well, as a science fiction film.

Guess what?! WorldCon and Nine Worlds are both in London! That's pretty damn awesome and, as a result of this consolidated awesomeness, lots of you are coming from non-London places to attend.

As your hosts, we want to make sure you leave the convention centre and enjoy the greatest city in the world.

We asked a host of Londoners to suggest a few of their favourite places in the city - chosen because they're fun, accessible, not-break-the-bank-expensive and very London-y: