The Best and Worst Books of July

The round-up of the high- and low-lights of the month's reading (also, when I assuage my guilt on being so very far behind on reviews).

A strange month of reading. Stopping and starting one or two books means I'm probably reading some dodgy books. But when the count grows beyond that, I suspect that I'm the one at fault. The cure for being burnt out? Old favourites! So July - the half-year point - was punctuated pretty heavily with Ed McBain, John D. MacDonald and even a KJ Parker.

The best of the month 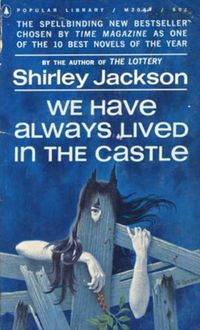 Charlie Human's Kill Baxter (2014). Reviewed! A delicious skewering of contemporary fantasy whilst also being a cracking adventure in its own right.

Shirley Jackson's We Have Always Lived in the Castle (1962). Megan Abbott posted this short reading list of 'teens on the edge', and like a dutifully obsessive fan-type, I read all four. They were, unsurprisingly, all kind of awesome. (The weakest of the batch? We Were Liars - I'd still give it a thumbs up, but it felt a fit one-twisty, and not quite as deep as the others.)

We Have Always Lived in the Castle is creepy, empathetic, atmospheric, disconcerting and - from start to finish - relentlessly tense. It is that tension, also found in the best of noir, that makes the book so impressively claustrophic. And, what's most impressive (in a book filled with very impressive things) is the way the book ends: yes, we get the release and no, it is in no way satisfying, at least according to traditional literary expectations. In truth, everyone gets not what they want, or what they need, but what is most fitting of all - a sort of small town purgatory.

Robert Grant's The King's Men (1884) is an early historical romance / political dystopia. Reviewed here. Imagine Sinclair Lewis' It Can't Happen Here but written fifty years earlier and set in Britain. Which is to say the two books are... pretty much nothing alike. A fun read though, swashbuckling and scenery-chewing, but also with a good sense of humour.

And the furthest-from-best of the month 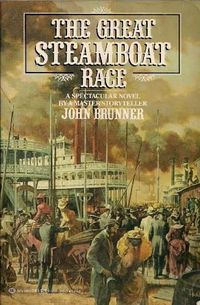 John Brunner's The Great Steamboat Race (1982) is a gargantuan historical epic from a legendary SF writer... a flop so dire that it is rumoured to have killed his career. And, let's be frank, this is career-endingly awful, a flabby soap opera of portentous grandstanding and half-baked mysticism. It takes over three hundred pages for the titular race to start, by which time the reader has been bludgeoned into submission by dozens of uninteresting, unpalatable characters.

The contrivance doesn't help. The world was smaller in 1870, but that's still no explanation for the fact that a) everyone is related, b) everyone is romantically entangled or c) everyone is connected in business. [Or d) all three at the same time. It happens. See: unpleasant.] A historical epic that epitomises the worst traits of the genre - the ponderousness, the revisionism, the pseudo-mystical gobbledegook, the shameless contrivance and the reductivist characters.

(Perhaps what's most frustrating: Brunner occasionally recognises a greater pathos - the fact that steamboats (full stop) are already approaching obsolescence, and all of this drama is kind of desperate artifice. Rearranging the deck chairs of the Titanic, to steal a metaphor from a different marine setting. But instead of fully acknowledging the greater historical arc and embracing the beauty/tragedy of the end of an era, Brunner labours to make the steamboats qua steamboats significent. Which, since they aren't, means he has to fall back on mysticism and contrivance - creating fictional meaning for 'real' objects, whereas, if taken as symbols of change/decadence/maturity instead, they've got significance a-plenty.)

Megan Whelan Turner's The Thief (2005) is a secondary-world fantasy adventure. A thief (Eugenides) is sprung from prison to go on an impossible quest for a legendary treasure (with untrustworthy companions, too!). I'm aware that I'm in a substantial minority here, but this book didn't do it for me. The Thief was... fine, and I expected more.

Eugenides is a pretty irritating fellow (granted, he's supposed to be), but I didn't find anything about him particularly charming to balance that out.  Nor did The Big Revelation at the end of the book do it for me. To couch it in spoiler-free language: just telling me someone is a Good Guy doesn't make me forgive a book's length of whinging.

Nor will I ever condone random interruptions of Mythic Worldbuilding. Whenever the plot of The Thief gets moving, or the characters start to interact in interesting ways, the book interrupts itself with  meandering fables about How The Gods Created The World. At best, this was extraordinarily heavy-handed symbolism. At worst, it was infodumping. As a plus: at least the keeps the world-building in convenient, skippable packets. As a negative: wow, do I not care.

In The Thief's defense, as a heist, just as I admire a good police procedural, my favourite scenes involved Eugenides putting his mad thief skillz to use. But a crime novel needs to go beyond the 'how' and into the 'why' - as much as I liked watching Eugenides make his Search checks, I'd rather care a little more about his reasons for doing so.

Max Brooks and Raulo Cacares' The Extinction Parade: Volume 1 (2014) is the first collection of this new comic book series from Avatar. Vampires vs zombies feels like it has been done to death - and, let's be honest, as a concept, I'm not sure it ever really had a lot of life in it. The first issues set up Brooks' nameless (they have names, I can't be bothered) vampires and the wacky hijinks of their vampire lifestyle. Then the zombies come. The vampires get miffed because they're running out of humans. So they start fighting back.

I'd say I spoiled the plot there, but, for this first volume at least, that's all that happens - and it feels less like an actual arc than an extended set-up. It take a long time to get to what is, for all practical purposes, the beginning. Instead of plot, this volume is filled with the sort of brutalist self-indulgence that you traditionally find in a Marc Millar comic: Look how awful this all is! Look at it! Are you not horrified and secretly titillated? [Instructions: If reader says 'no', add more blood, cleavage, swearing and sexual violence.] World War Z was a genuinely new approach to zombies: empathetic, intriguing and character-driven. The Extinctional Parade is none of the above. It has also been optioned for TV because TV hates us.

Fred Chappell's Dagon (1968) is a Lovecraftian horror story crammed into the form of a Southern Gothic. As an ambitious literary experiment it probably succeeds - there are certainly merits to this book, not least of which would be its sensuous prose. Chappell successfully makes bedfellows of the two genres - the formless unknowable horrors of Lovecraft and the languid, timeless, corrupt atmosphere of the Southern Gothic. But where Dagon focuses is at the point where the genres already overlap, in their shared xenophobic fear of racial degredation and the poor.

All of which makes Dagon sound like a better book than it really is. Ultimately, the tale of a preacher and his downfall is meandering and, after the opening chapters, completely devoid of tension. Perhaps Chappell does his job too well, for as his protagonist quickly slides into debauchery and nihilism, the reader finds it easy to stop caring too. The ultimate (and utterly unsurprising) conclusion comes as a relief. Again, that may be the point. But why?

The Best and Worst Books of July

The round-up of the high- and low-lights of the month's reading (also, when I assuage my guilt on being so very far behind on reviews).

A strange month of reading. Stopping and starting one or two books means I'm probably reading some dodgy books. But when the count grows beyond that, I suspect that I'm the one at fault. The cure for being burnt out? Old favourites! So July - the half-year point - was punctuated pretty heavily with Ed McBain, John D. MacDonald and even a KJ Parker.